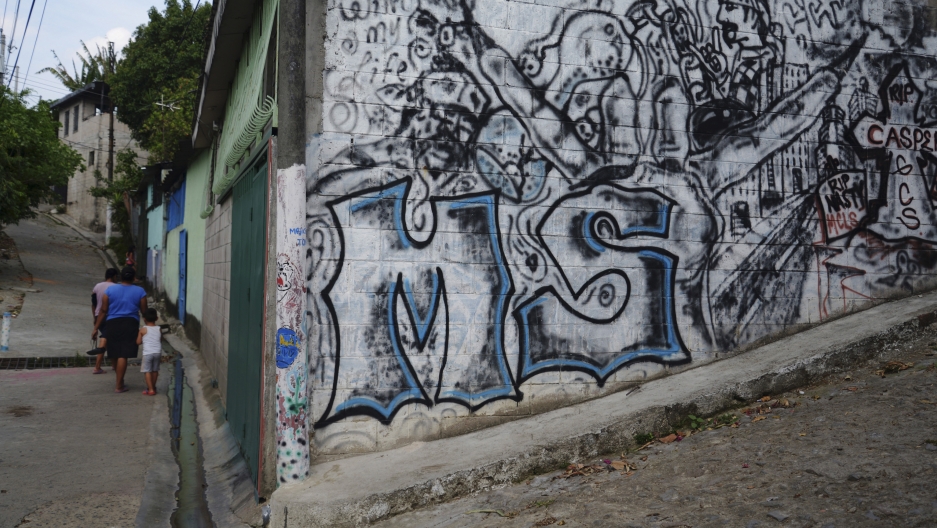 Graffiti of the letters "MS," which stand for the street gang Mara Salvatrucha, photographed in San Salvador on April 22, 2014. Mara Salvatrucha (MS-13) and Calle 18 are rival gangs that started in Los Angeles but now have a heavy presence in El Salvador.
Credit:

There’s an important bridge in this small town about a half-hour's drive from San Salvador. Locals say it divides the town between two rival gangs: MS-13 on one side and Calle 18 — the 18th Street Gang — on the other.

Both gangs started in Los Angeles and now control parts of El Salvador. On the day I visited the bridge, a man rode past me on his bike. He wore white Nikes, the kind favored by local gang members. It’s a subtle sign people here surely notice.

But some locals are sick of the gangs. “The way things are now, going out into the street means danger or death,” says José, a 16-year-old from this town who tried to escape to the United States twice this summer.

I meet José on a sunny day just 24 hours after he was deported back to El Salvador. Mexican immigration officials discovered José and his young cousin on a bus heading north. It was the second time the two boys were caught in Mexico trying to reach the US.

“We offered them 1,000 pesos each, but they wouldn’t take it,” José says. Five days later, he and his cousin were sent back home.

I can only use José's first name because he's now in hiding. Now that he's back, he's trying to keep it a secret from the MS-13 gang members, mostly other teenagers, who control the other side of the bridge. According to José, they’ve threatened to kill him because they think he belongs to Calle 18.

“If they find out I’m here, they might come to look for me and come to my house at night,” José says. “That’s what I don’t want to happen. It’s one thing if they want to hurt me, but they could hurt my whole family.”

José says his problems started two years ago when he had to cross the bridge into MS-13 territory to go to school. One day, José's classmate, who was linked with MS-13, brought a gun to school. The principal found out and the classmate accused José of ratting him out.

“They came looking for me with a shotgun and they told me to never come back,” José says “They said I was spying for the other gang.” His mother removed him from the school right away, and José switched to another one that only met on Sundays.

José’s biggest scare came a year later, when he says another boy — a neighbor who looked so much like José that everyone called them twins — was gunned down in the street by MS-13. That boy was actually a member of Calle 18, and José wasn’t. But José was told he would be next.

For the next month he was too scared to step outside his mother’s house. He went to stay with his grandmother in another town, and took up carpentry to help support his mother, a widowed seamstress.

José insists he’s never been in a gang. With his thin frame and shy smile, he looks younger than 16. He says he likes science and soccer, though he admits he’s never had a chance to play on a real team. 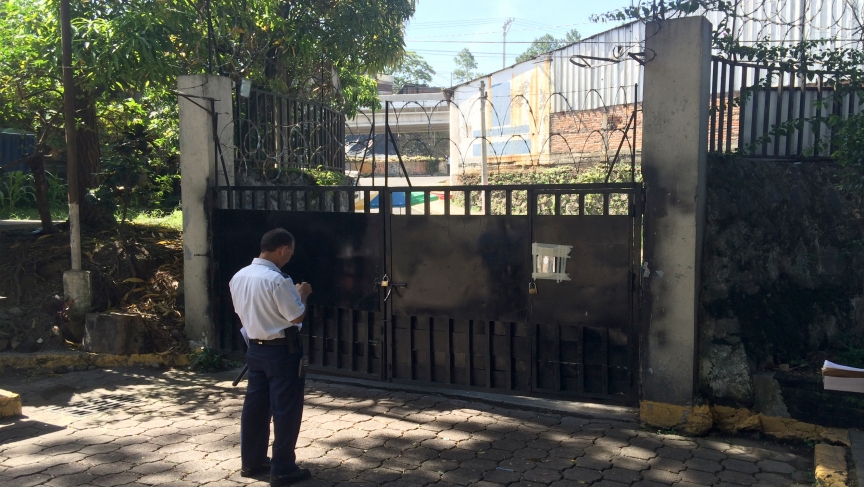 A guard outside of a deportation processing center in San Salvador, El Salvador. José, a 16-year-old from a town near the capital, left the center in August after being caught and deported by officials in Mexico.
Credit:

It was hard to find a safe place to even interview José. He didn’t want to talk to me anywhere in public. Visiting his house in this small town just outside the country’s capital, San Salvador, would’ve drawn attention. So we meet at a hotel outside the town that caters to tourists.

“There aren’t people from here at this hotel, just people from other countries," José says. "It’s really expensive, so we’ve never even been inside here until now.”

If it sounds like José is paranoid, keep in mind that UNICEF recently named El Salvador as the child murder capital of the world. It has a child murder rate of 27 per 100,000 residents, compared to 4 per 100,000 in the US. According to the same report, homicide is the leading cause of death among adolescent boys in El Salvador.

Now that he's back in El Salvador once again, José says he wishes his government would do more to help young people. “If the government put schools, workshops, or gave young people jobs, I think [violence] would go down a lot,” he says. But he knows change won’t come soon, and he's still determined to go to the US.

For now, his focus is on staying safe in El Salvador. Since our first interview, José has gone to stay with relatives in a place where criminals haven’t taken control. He hopes that the same gang problems he’s faced in the past won’t creep up there, too.

But the trouble may have already started. Within hours of coming back, José and his cousin were on their way home from the center that processes returning migrants. José's mom and other family members came to pick them up, and they all crammed into another relative’s pickup truck.

On the way, they stopped at an aunt’s house. There, a group of unknown gang members circled the truck and questioned José and his cousin. "It was just because we are young guys and aren’t from the area,” José says. “And when they see a young guy they don’t know, they assume he was sent by the rival gang.”

José said the gang members made some phone calls and decided he and his cousin weren’t a threat — but it could have ended very differently: “The same day that I returned to El Salvador, I also could have lost my life."

Ed Note: The second half of the audio for this story includes an interview with Jude about her reporting in El Salvador.

Also, reporter Kate Sheehy contributed to this story from the Fronteras Desk, a public radio collaboration in the Southwest. It was the second part of a two-part series. You can click here to read and listen to the first part of the reporting team's coverage on migrants from El Salvador.