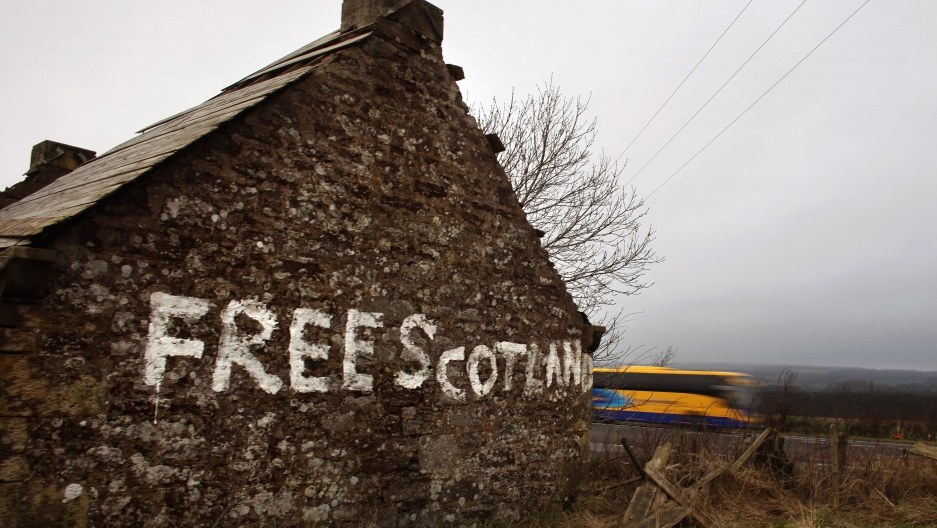 Finally, Scots have their chance. Will they take it?
Credit: Jeff J Mitchell
Share

LOCHGELLY, UK — A gray drizzle slicked the pavement outside as Gavin Loudon dropped into a chair at the public library in this Fife, Scotland town.

He wore a crossing-guard-style blue vest emblazoned with the Yes logo of Scotland’s pro-independence campaign. He also had a Yes messenger bag, Yes bracelets ringing both wrists and a stack of Yes pamphlets under one arm.

The former boxer looked tired but dogged, having knocked on 1,000 doors that day with fellow volunteers. In the last two years, Loudon estimated, the local Yes branch has distributed some 400,000 leaflets extolling the virtues of a sovereign Scotland.

He’s dedicated to this movement nearly four years of his life, some $3,000 of his own money and a $1,600 bet on Yes with the local bookie.

And on Thursday, it will all be over.

“It’s exciting, and butterflies,” said Loudon, 34. “Everywhere you go, the buzz, the atmosphere, the energy — the whole country’s alive.”

The pits closed 50 years ago in Lochgelly, a former coal and iron mining town 13 miles as the crow flies across the Firth of Forth from Edinburgh.

The half-century since has been one long, slow decline. There are so many abandoned shopfronts and shuttered businesses on Main Street that it looks like the occupants were spirited away by the Rapture.

The town of 6,800 is in the parliamentary constituency of former UK Prime Minister Gordon Brown.

While Loudon and his compatriots were papering towns with the Yes campaign’s cheerful placards, Brown was criss-crossing Scotland in an attempt to convince voters that the UK government will offer the Scottish government more powers if people vote No.

For Yes voters, it is all too little, too late.

Supporters like Loudon frame their argument for an independent Scotland as one of social justice. It’s a chance for Scotland to address for itself the festering problems of modern British society: the proliferation of food banks in a wealthy country, diminishing public services.

More from GlobalPost: These tiny islands may hold the key to Scotland's independence (VIDEO)

Two years ago, UK Prime Minister David Cameron and the Westminster establishment were so certain that a referendum would fail that they dismissed the Scottish National Party’s request for such powers — known as “devo max” here — and demanded an in-or-out vote instead.

Two months ago, polls showed the No side in a comfortable 22-point lead, a place they held for virtually the entire campaign.

Two weeks ago, the polls showed for the first time that a majority of Scots favored ending their country’s 307-year-old union with England.

The polls since then have shown the two sides in a dead heat statistically.

The referendum has galvanized voters here like nothing in anyone’s memory. It is the subject of virtually every overheard conversation in Scotland’s buses, pubs, markets and street corners.

Nearly every eligible Scot — 97 percent — has registered to vote. More than 80 percent are expected to cast a ballot in Thursday’s election.

No one knows what Great Britain will look like when it wakes up to the results in the early morning hours Friday. Only one thing is certain, Loudon said.

“Regardless of which way the vote goes, Scotland will never, ever be the same.”

In Edinburgh, the UK’s second biggest financial center, a retired lawyer in a red silk tie smoothed out his copy of the conservative-leaning Telegraph newspaper at a cafe table. A waitress brought him coffee and he thanked her by name.

His three children live in England. If Thursday’s vote swings Yes, he said, he and his wife might join them. Over the last two years, the couple has been selling their properties in Scotland as an insurance policy against the uncertain business climate of a newly independent country.

“To quote Warren Buffet: always have a margin of safety,” he said.

He’s not the only one considering a move if Scotland votes for independence.

Scotland-based institutions Standard Life, Lloyds Banking Group and the Royal Bank of Scotland have all said they would follow the UK’s corporate-friendly tax laws to England in the event of a Yes vote. Several insurance companies have already quietly redomiciled south of the border, the lawyer said.

It’s not clear what impact such moves would have on Scotland’s jobs or tax base.

For unionists, this uncertainty is one of the chief arguments against disintegration. Dismantling the United Kingdom would be an enormous undertaking. Some of the most serious details — the currency that Scotland will use, whether or when it can join the European Union — can’t be known until after the vote is cast.

The Scottish National Party’s plan for economic independence centers on North Sea oil and gas revenues. But no one knows just how much North Sea oil is left — estimates range from 10 billion to 33 billion barrels — or what the price of any future barrel will be.

The independence side tends to dismiss such concerns as “scaremongering.” That doesn’t change the fact that they’ve staked a lot on a commodity of vastly fluctuating price and unknown quantity.

Earlier this month, former SNP deputy leader Jim Sillars warned that anti-independence companies would face “a day of reckoning” in an sovereign Scotland not “as soft as we have been forced to be.”

The lawyer, who asked that his name not be used for this story, found this “chilling.” Like many unionists, he feels Scottish National Party leader Alex Salmond, the first minister of Scotland, has done little to rein in his camp’s excesses.

To him, Salmond is a Hugo Chavez-like figure whose brand of populism relies on class tensions and resentment.

More from GlobalPost: This map shows all the countries that have declared independence from the British

“People are genuinely divided,” he says, his brow furrowing above rimless glasses. “They are really, really divided. And do you ever put the division back again? I’m not sure if you do.”

Despite the passion on both sides, there have been very few instances of referendum-related violence. It’s a campaign of words, some of which have become very heated in recent months.

“Problem is most Yes voters have not a brain to think with, if they did they would be voting No,” a No supporter wrote in a typical exchange on Better Together Edinburgh’s Facebook page.

“I am a yea voter and I do have a brain,” came the reply. “I take it your a torrie [sic] arse kisser cheeky cunt.”

Both sides tell stories of aggressive and verbally abusive detractors from the opposite camp. Margaret Pollock, the diminutive 75-year-old Yes campaign head in the unionist stronghold of Helensburgh, said she had objects thrown at her while canvassing.

But the impression anecdotally and in the national press has been that most of the “bully boy tactics,” as one Edinburgh unionist called them, have come from the nationalists.

Salmond is a polarizing figure in British politics, a tenacious and shrewd tactician whose detractors even describe as a brilliant politician. But the chief driver of the independence campaign isn’t above a little aggression himself.

In one publicized instance, the head of the Scottish Fishermen’s Federation wrote to Salmond earlier this year questioning SNP fishing policies. Salmond fired back with a letter to chief executive Bertie Armstrong calling his interpretation “ridiculous.”

When Armstrong confronted Salmond at a public meeting earlier this month on what he saw as a personal and intimidating attack, Salmond doubled down.

“Maybe there has been a change in the types of leader that this industry has. But I can’t think of anybody over the past quarter of a century who would have felt intimidated by a letter,” he told Armstrong in front of a crowded room.

Donald Low, the harbormaster in the east coast fishing town of Pittenweem, is not a man easily intimidated. Wearing yellow rain boots and a tie reaching just halfway down his barrel chest, Low was blunt about what he saw as the difference between No and Yes voters.

“It’s the educated versus what we call the numpties. They’re the lot that don’t normally vote because they’re too thick to work it out for themselves,” he said. “Many people are too scared to speak up [for the union] because they’re afraid to get a brick through their window.”

This “silent No” phenomenon is one of the reasons some people think the union will prevail on Thursday.

Others say the momentum is on the Yes campaign’s side.

“The atmosphere the last few weeks has been absolutely electric,” said Yes volunteer Morwen Boyd, 28, at a booth sponsored by the Green Party in Edinburgh. Supportive motorists tapped their horns while Boyd and fellow volunteers cheered, danced and handed out literature to passersby.

The Yes side is exciting. It’s young and passionate and fun. One of Salmond’s many coups in this campaign was to get the ballot question worded so that his side could have the affirmative answer.

Supporting the status quo doesn’t have the same cachet.

MP Rory Stewart, a passionate unionist whose constituency spans the Scottish border, said his efforts to recruit celebrities went largely rebuffed. Those who have spoken out have been pilloried on social media.

Harry Potter author J.K. Rowling was called a “traitor,” “whore,” “Union cow bag” and “specky bastard” (a particularly Scottish insult for a bespectacled person) on Twitter after donating $1.6 million to the union campaign.

After David Bowie implored Scots to stay in the union during an acceptance speech at an awards show, “cybernats” took to his Facebook page to tell him to “fuck off back to Mars.”

“Scotland is a bunch of tribes. Clans. We can’t agree on nuthin,’” said Andrew Christie, 43, a trawlerman from St. Monans. “I think Scotland is a country that has to be governed. We can’t govern ourselves. Too wild. It’s in our genetics.”

The polls open at 7 a.m. Thursday. The results will trickle in overnight, with a final verdict expected between 4 and 6 Friday morning. A lot of people are planning to stay up all night. Not much work is getting done in Scotland on Friday.

Whatever happens, Scots are going to have to live with each other and with their neighbors south of the border afterward. The campaign has made both sides confident that a better Scotland is possible. The challenge will be to channel that energy into positive change after the vote.

“Life is not gonna end on Friday one way or another,” said Rev. Iain May, a former banker turned minister in the working-class parish of South Leith. “What will upset the people of Leith and Scotland is if promises are not kept.”

His working-class congregation on Edinburgh’s outskirts is split down the middle on independence.

They are no strangers to internecine conflict, May joked — the parish is also divided between Hibs and Hearts, the nicknames for supporters of rival Edinburgh soccer teams Hibernian and Heart of Midlothian.

For better or for worse, it will still be the same Scotland come Friday, May said. Every Sunday after services, there are 50 or 60 people waiting outside his church’s door for a hot breakfast. A similar number visits the parish food bank.

“They’ll still be there next week,” May said.

More from GlobalPost: The word on the street in Scotland, an Instagram tour