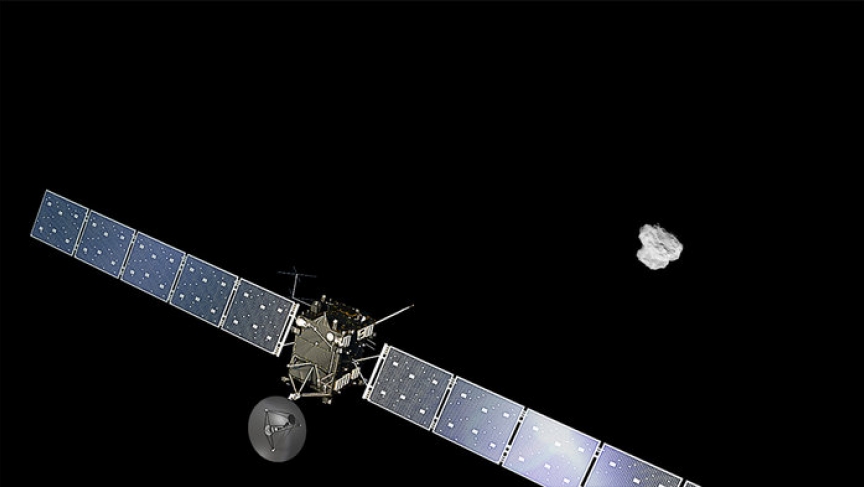 An artist's impression of ESA's Rosetta approaching comet 67P/Churyumov-Gerasimenko. The comet image was taken on August 2, 2014, by the spacecraft's navigation camera at a distance of about 500 km. The spacecraft and comet are not to scale.
Credit:

The European Space Agency's Rosetta mission launched in 2004. Ten years later, it's finally at its destination: Comet 67P/Churyumov-Gerasimenko. It's the first mission in history to rendezvous with a comet and then escort it as it orbits the Sun, but the drama has only just begun.

That may not sound like much, but Beatty says "the problem is not that it will crash, but that it will bounce off. So as soon as it touches down, it's got three legs and there are screws in the bottom of its feet that will auger down and tthere's a harpoon that's going to anchor it to this comet so that it won't bounce away." 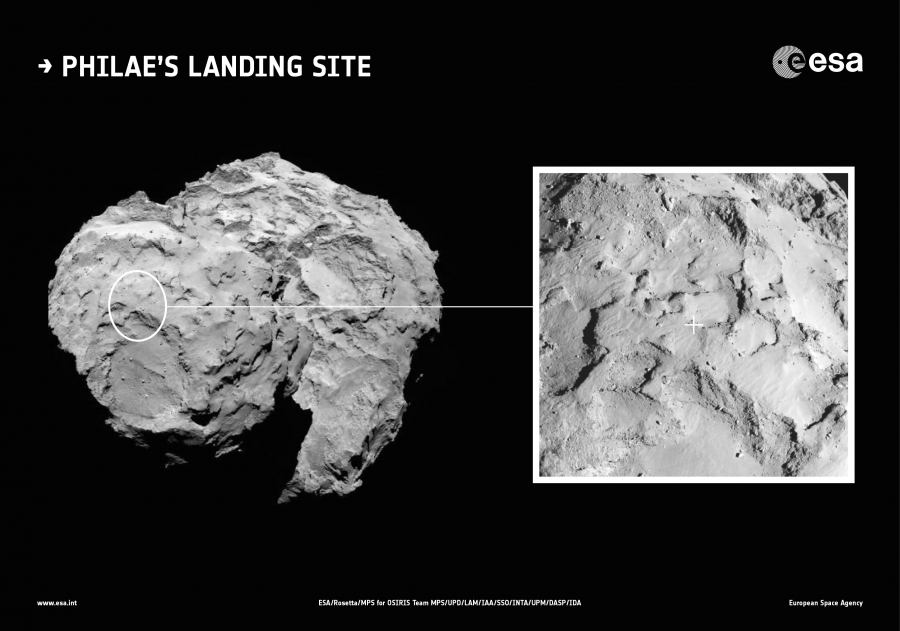 Rosetta Mission photo showing the primary landing site for the comet probe Philae on Comet 67P/Churyumov–Gerasimenko. Image was taken by Rosetta’s OSIRIS narrow-angle camera on 20 August 2014 from a distance of about 67 km. The image scale is 1.2 metres/pixel.
Credit:

The point of landing on a comet — in fact, the point of the ESA's whole Rosetta mission — says Beatty, is "to fly in formation with [the comet] to watch all the things that happen, all the seething and sputtering and spitting that take place as those primordial gases heat up and fly away."

The "first ever mission to land on the surface of comet" sounds spectacular on its own, but why do scientists want to investigate a comet? After all, it's a relatively small space object compared to stars and black holes and planets.

"Comets are leftovers from the formation of our solar system," Beatty explains. "So literally, this object 67P is four and half billion years old and is largely untouched since that time. So understanding what this comet is made of — not just in terms of, 'Is it rocky or is it icy?' but right down to the isotopic level — we can have a window on the processes that were going on when the sun and the planets came together. That's really important."

The mission will only get better as the comet continues its orbit around the Sun. "With Philae, the lander, in place on the surface, we'll be able to watch the comet wake up as it nears the sun, get a sense of what are the chunks flying off of it," Beatty says. "This will all give us insight into the origin of comets and from there the origin of our solar system."

Once Philae latches onto the comment, it has a busy schedule. "The initial science phase will then begin, with other instruments analysing the plasma and magnetic environment, and the surface and subsurface temperature," explains the ESA's Rosetta mission blog. "The lander will also drill and collect samples from beneath the surface, delivering them to the on-board laboratory for analysis. The interior structure of the comet will be explored by sending radio waves through the surface towards Rosetta."

In short, Beatty says, the Rosetta mission is "a chance to watch, touch, smell, taste and hear what the comet does." 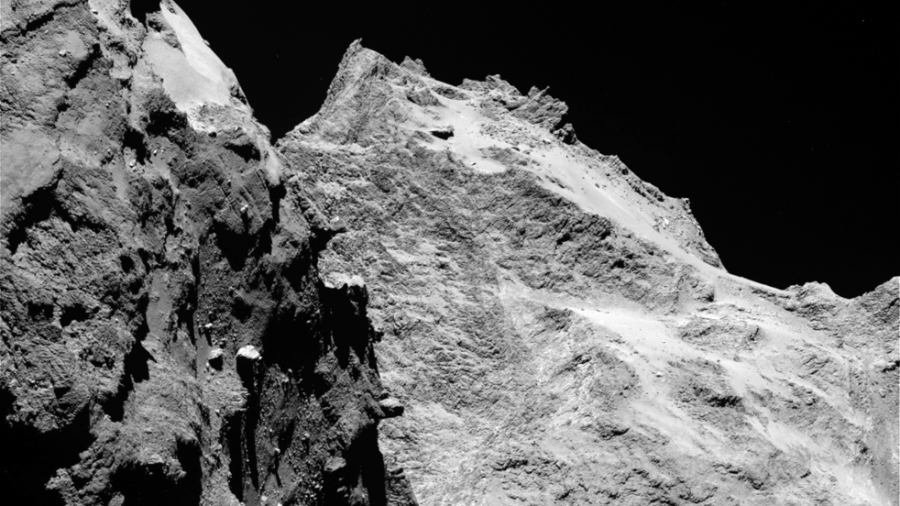 Jagged cliffs and prominent boulders are visible in this image taken by OSIRIS, Rosetta’s scientific imaging system, on 5 September 2014 from a distance of 62 kilometres from comet 67P/Churyumov-Gerasimenko. The left part of the image shows a side view of the comet’s 'body', while the right is the back of its 'head'. One pixel corresponds to 1.1 metres.
Credit: