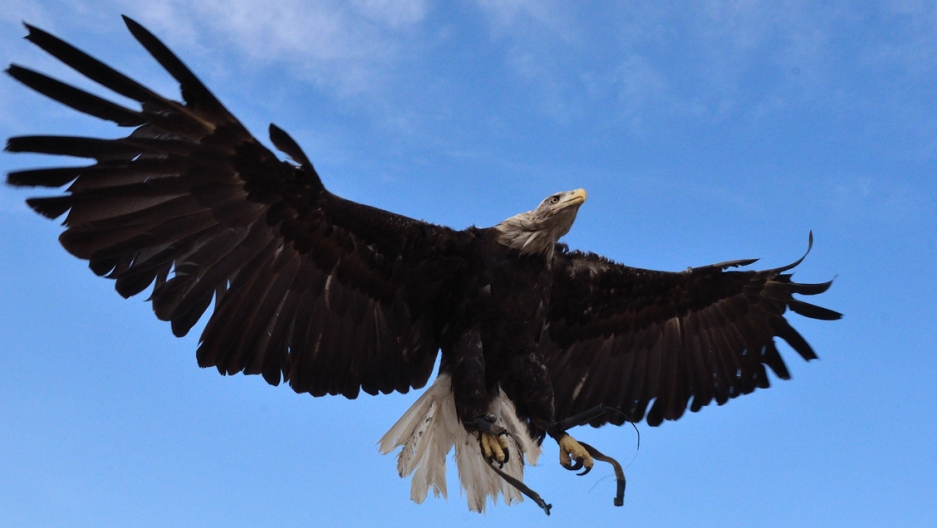 A bald eagle spreads it wings. The eagle is just one of hundreds of North American birds now threatened by the effects of climate change
Credit:

A report released by the National Audubon Society estimates that about half of North America's bird species may be forced to find a new habitat over the next 65 years because of the impact of climate change. Some will survive the move, but many others will not.

Even the bald eagle, the symbol of the US, will be unable to breed in the lower 48 states by the end of the century unless dramatic action to preserve the species is taken.

Of the 650 bird species at risk, 126 are lowland bird species like eagles, the brown pelican, and the common loon. The Audubon Society’s study found that these birds could eventually have nowhere to go, which is consistent with other research studies.

“When you start looking at all the other studies done on climate change for plants and animals, both in the US and abroad," says Dr. Gary Langham, vice president and chief scientist of the National Audubon Society, "you find that they’re really all telling you the same story. Somewhere between 40 and 70 percent of whatever organisms you’re looking at are at serious risk from climate change.”

Langham says the three climate variables that affect birds the most are temperature, precipitation and seasonality, which influences the timing of major events like breeding and migration. “Some of the things we’re seeing today [that reflect the] direct impact of climate change are changes in ocean temperature,” he says.

“[Take] Atlantic puffins, for example. In Maine, this year was pretty good, but [during] the last two years, the water was so warm that the fish population shifted. Parents were bringing back fish that were too big for the chicks to eat, and this was having severe impacts, including deaths of the chicks.”

In addition to puffins, eagles and the common loon, one of the hardest hit species will be the Rufous hummingbird.

“It’s not hard to imagine that for the hummingbird, [warming] could also impact the flowering timing of the nectar-giving plants they depend on,” Langham says.

Climate change also has some less obvious consequences on the ecosystem. Langham says 13 species of woodpeckers are going to be “dramatically” impacted by the changing climate. “What’s not included in our study, but is related to climate, are things that impact the trees they depend on." So when trees die off, insect patterns change and there are more forest fires. These indirect effects of climate change will hurt birds, too.

Even birds that are considered relatively "safe” may still be at risk from climate change.

Take the Mississippi kite, says Langham. It is a raptor that eats small vertebrates, like lizards, and breeds within a colony. "The open question is, can the bird actually move its colonial mating system north to take advantage of the new climate? And, what is it going to eat when it gets there?”

The Audubon Society created maps to show where at-risk birds currently reside, so people can see the impact of climate change in their area.

“There’s nothing like a map, and people looking at it, to spark conservation and get people talking," Langham says. "They’ll see that birds in their own state and their own communities are at risk — and that will drive conversations and move them to greater action.”

This story is based on an interview that aired on PRI's The Takeaway, a public radio program that invites you to be a part of the American conversation.