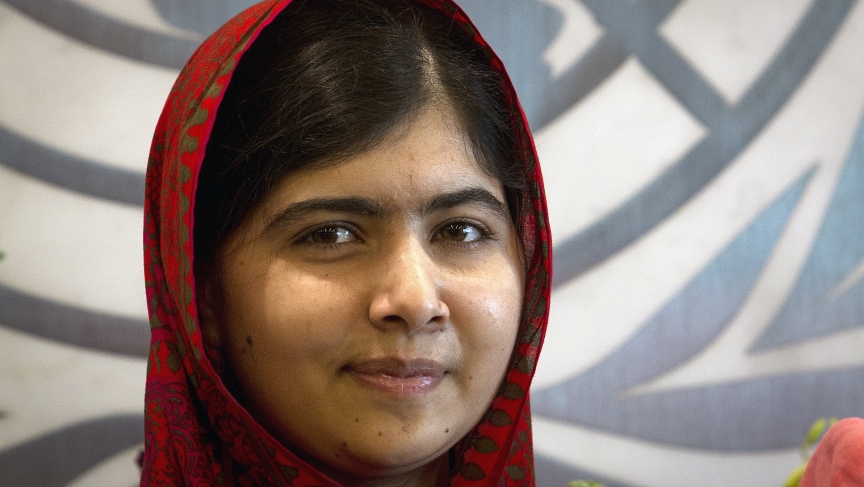 Malala Yousafzai became an international symbol of bravery and hope for women after she was targeted by the Taliban in Pakistan two years ago for speaking in favor of girls' education. The teen recovered after being shot in the head. On Friday, Pakistan's army announced it had arrested 10 men behind the attack, some of whom had been caught months earlier.

The Guardian reports that the military kept the arrests under wraps so it could carry out operations against the Taliban and other groups based on information from the suspects. A former spokesperson for the Pakistani Taliban disputed the army claim that central Taliban leaders had ordered the men to kill Malala and 22 other opponents of the group in the Swat Valley.

After Malala was shot, the Taliban quickly claimed responsibility, but then said local members of the group had tried to kill her on their own initiative. A military spokesman said the accused men would be tried under an anti-terrorism law.

Al-Qaeda fighters want press coverage, even if it is bad press

With ISIS getting all the global media attention, Al-Qaeda sought to bolster its public profile last week by announcing its newest branch, al-Qaeda in the Indian Subcontinent. But the group's first apparent outing — an attack last weekend — failed miserably.

Britain's The Telegraph reports that heavily-armed militants went to a naval dock at the Karachi seaport expecting to find an American aircraft carrier. Instead, they attacked a Pakistani frigate. The fighters were quickly subdued, with three killed and four captured. Interrogations of the prisoners led to the capture of another three fighters later.

Al-Qaeda issued a statement on Thursday taking responsiblity for the attack and saying it had been going after "American Marines and their cronies." Investigators, though, are uncertain if the group really carried out the attack or just decided to take credit for it. Maybe getting press for a failed attack is better than getting no press coverage at all.

Colombia goes undercover in an anti-groping campaign on public transit

Statistics indicate that one in six women in Bogotá have been sexually harassed on public buses. But the next time someone tries to harass a woman, he may be confronted with an immediate arrest. The Bogotá police force has a new, undercover unit of eleven officers, most of them women, who are riding the buses.

PRI's The World spoke to a BBC reporter who spent a day with the squad. The officers are trained to read body language to help them spot potential harassers. The police say the female officers are not there to act as bait for harassers  — that's against Colombian law.

And the group drops the clandestine approach to make highly public arrests as a deterrent to other harassers and to reassure women that they have help. The squad's officer in charge says it is still too early to tell if the strategy is working, but signs after the first month in action are looking good.

Even rice plants benefit from Buddhism

Rice farmers in Liangshan village in East China's Fujian province say they have a new agricultural technique that boosts production by 15 percent. They play Buddhist chants over lotus-shaped speakers to their rice plants.

China's English-language Global Times reports that agriculture authorities say the rice plants also produced larger grains than usual, while fields without the music were prone to pests. And for the skeptical among you, the report says experts at China Agricultural University note that rhythmic sound waves have been shown to help plants absorb more sunlight. But a local official is quite sure that only "positive" music is helpful and expects rock 'n roll would hurt plant growth.

Venezuela says 'no more' to a skyscraper of squatters

The "Tower of David" was intended to be a magnificent financial center in the heart of Caracas, Venezuela. But it was abandoned after its chief financier, David Brillembourg, died and a financial crisis hit in 1994. Seven years ago, thousands of squatters started moving in, creating a community complete with chapels, basketball courts and businesses in the 45-story, elevator-less skyscraper.

Now Venezuela's government wants to revitalize Caracas and is moving the squatters into government-owned apartments 25 miles away. Some of the squatters are happy that they are finally getting the homes they have always wanted, while others are sad to leave the community they have created and the jobs they have found in the city. PRI's The World has their stories and a slideshow of "the world's tallest squat."

What we are seeing on social

The summer of 2014 has been hotter than usual for parts of China, India and North and South Korea — with New Delhi hitting 48 degrees C. (or 118 F.) Deutsche Welle notes that the heat has led to skyrocketing energy use as millions of people sought relief using air conditioning and other appliances.

As Asia continues to develop, air conditioning will spread, spurring energy consumption and its resulting environmental consequences. In China alone, air conditioning adoption rose by more than 10 times in under a decade. China could soon eclipse the US, which has an 87 percent rate of ownership of air conditioners.

This post is a regular feature of PRI.org. It's a daily brief and email newsletter of stories, events and graphics that are catching the attention of our news staff. The World's Leo Hornak kicks it off from London and various folks on our editorial team around the globe contribute from there, like Cartoon Editor Carol Hills in Boston. Don't expect anything near the standard wrap of major news stories. This blog post and its email companion will be as idiosyncratic as our staff... and we'll want you to tell us what you like and don't like. Sign up for a PRI.org account and subscribe to our newsletter to get it delivered to your inbox.