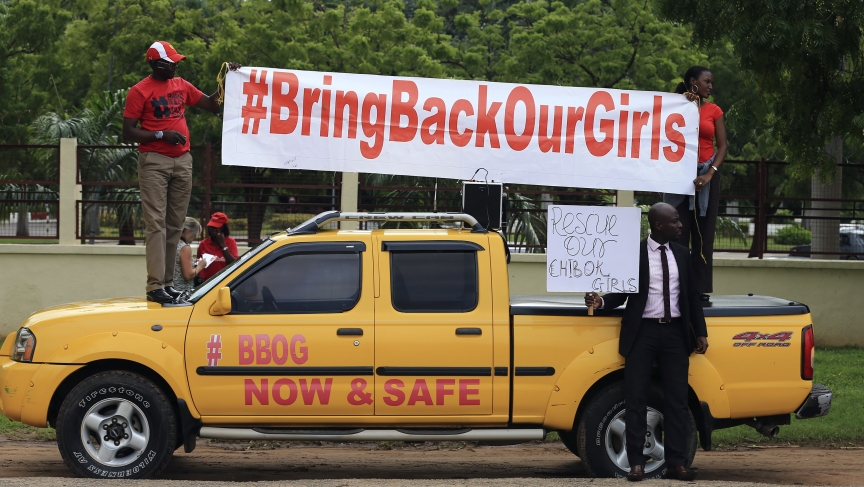 Demonstrators hold up a banner during a rally in Abuja that was held to mark the 120th day since the abduction of 200 schoolgirls by the Boko Haram Islamist groups on August 12, 2014.
Credit:

The Islamic militant group Boko Haram continues its push through Nigerian towns, and the United States has announced a major border security program to help Nigeria and its neighbors fight group terrorist groups. But it's not that simple.

A new documentary from Frontline titled "Hunting Boko Haram" shows that the situation in Nigeria is more complex than simply aiding the government: New video obtained by Frontline shows that some government troops going after Boko Haram are also torturing, beating and summarily executing local villagers.

Frontline reporter Evan Williams says the project started a year ago when he began to hear accounts of a pro-government militia searching for Boko Haram members. The militia members are young boys, teenagers who arm themselves with anything they can find — knives, machetes and even bows and arrows.

Williams obtained cell phone videos the militia members recorded as they conducted interrogations. "What they showed was all sorts of abuse," he says. "Torture, beatings and then men disappearing in the hands of the military."

Williams says it's not hard to join a militia, or even start your own: You essentially grab your friends and some weapons, then head out to set up checkpoints. And their actions — and the government's support of the groups — challenge the notion of who the good guys in Nigeria actually are.

Militia methods are often haphazard, Williams says. They will accuse a man of being a member of Boko Haram because of a mark on his finger, saying it's from firing a weapon. If the man is skinny, it's a sign he's been out fighting in the bush.

That's because the militias, despite early successes, have become an industry unto themselves. Because the government and the military pay the groups, Williams explains, they "need to find enemies."

Unfortunately, things don't seem any better when suspects are turned over to the military. Williams has uncovered hundreds of cases where people died in military detention.

The atrocities committed by government forces are putting the people in rural towns in tough positions. They don't want to join Boko Haram, but they are terrified and distrustful of the military. All of that harms the international community's effort to help confront Boko Haram.

Williams says that's why two militiamen gave him the cell phone videos: They want to show what's happening in the hope that it will spark some change. "They would like to see some process of accountability," he says.

Frontline’s new documentary, “Hunting Boko Haram,” airs on local PBS stations. You can view the first two segments of the film below: