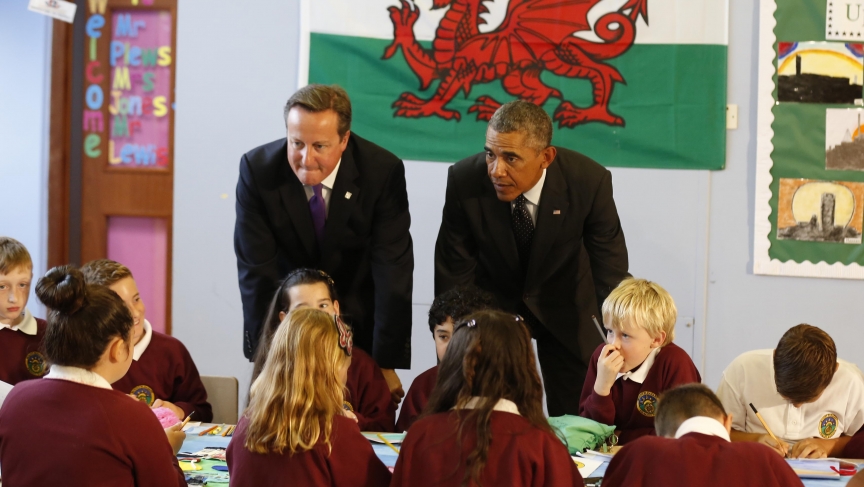 Barack Obama joins British Prime Minister David Cameron on a visit to a school prior to the NATO summit in Wales on Thursday. Western leaders are looking for strategies to deal with threats from Russia and the Islamic State.
Credit:

Some critics say American foreign policy under Barack Obama has been guided by his slips of the tongue: "Don’t do stupid stuff," and "We have no strategy."

President Obama came into office with a vision of a world at peace — a world where America re-built trust with old partners, and reached out to old rivals, even old enemies. That vision called for pulling American forces out of Iraq and Afghanistan and putting a renewed focus on the rising power of China.

Things didn't work out quite as the president envisioned.

Obama is currently at a NATO summit in the UK trying to figure out responses to a catalog of unexpected challenges, from Russian aggression in Ukraine to the chaos sweeping so much of the Middle East.

“Events in the world have a way of rearranging even the biggest grand strategy,” says Susan Glasser, editor of Politico Magazine, in an interview with The World.

Glasser cites Hillary Clinton, who said that you could have whatever plans you wanted as secretary of state, but managing the inbox was the one thing that wasn’t optional.

Glasser says this really applies to Barack Obama now. “We’ve tried over and over again to put a doctrine label on his foreign policy actions, but in reality he’s left reacting to his inbox — and right now the inbox is filled with overflowing crises.”

Critics of the administration say that under Obama, the United States is punching below its weight when it comes to exercising leadership in the world, and it’s not just critics on the right.

“I’ve been really struck by conversations over the last few months here in Washington with Democrats as well as Republicans who are openly voicing really significant concerns," Glasser says. Those Democrats want to know "the role the United States should be playing in the midst of these crises, seeing this as a real test of US leadership.”

Glasser says Obama’s failure to follow through on his "red line" over the use of chemical weapons in Syria hurt American credibility across the Middle East. Many felt that the US was “abdicating its leadership role.

“There is a broad concern and disaffection, even among America’s friends,” Glasser adds, “(that) perhaps we are turning away; perhaps we really are looking inward again, in a way that means the old security arrangements are going to be shaken up.”

But Glasser points out that this is all just a guess — something that the president may also want to fix. “I don’t know what President Obama’s view of the hierarchy of these crises is, because he hasn’t really spoken to it," she says. "He hasn’t really taken the time to communicate to Americans his view of what 'the world on fire' means right now.”