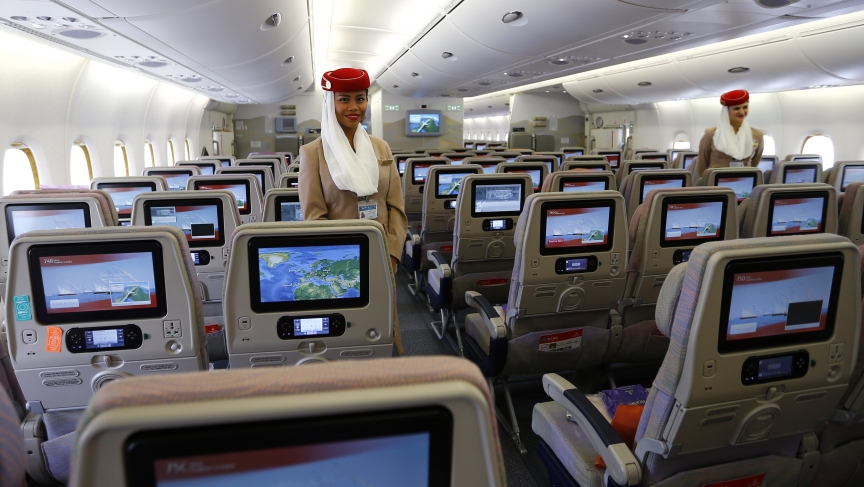 Economy class seats are pictured inside an Emirates Airbus A380.
Credit:

This summer, at least three flights were grounded due to passengers fighting over reclining their seats. That's triggered debate about whether a person should even be allowed to recline at all.

Fares may have fallen by about 50 percent compared to 30 years ago, but new airplane technology hasn't translated into a more comfortable travel experience — at least in economy class. Why does it seem like the only innovation in the passenger seat has been to make it smaller?

“The trend in recent years has to been to slim them down — not the passengers of course — but the seats themselves, to make them lighter,” says Barbara Peterson, an aviation correspondent for Condé Nast Traveler.

Lightweight seats help save on fuel costs, but Peterson says there's another obvious benefit: “These slim-lined seats also have the advantage, from the airline’s standpoint, that more of them can be put on a plane. That’s driving the trend.”

And more of those seats are carrying passengers than ever before. “There’s a higher percentage of those seats being filled,” Peterson says. “The load factor — which is the number of seats that are filled on average — has gone up from 56 percent right around the time of deregulation to more than 82 percent.”

As airlines cram more passengers into planes, is there still a sort of in-flight etiquette that applies? Apparently not.

“I’ve never even seen any recommendations about how to behave on a plane, it’s just not part of the travel experience,” says Peterson. “Consequently, if you do want to recline your seat, you have a right to do that.”

She half-jokingly suggests that, in addition to safety videos, airlines may want to consider providing reclining tips to passengers.

Frequent fliers are now buying gadgets like the “Knee Defender," which helps stop the person in front of you from reclining. The device was at the center of the latest in-flight reclining incident, and that's apparently helped boost its popularity.

“Sales have skyrocketed since these recent episodes,” Peterson says. “But the irony is most airlines will ban them precisely because it leads to this sort of rage in the air and diversion of flights, which are very expensive for the airlines." Personally, she says, "I think it’s pretty hostile to use those ‘knee defenders.’”

However, hope for restoring civility may be on the way — Bastian Schaefer, a designer who's the innovation manager with airplane manufacturer Airbus, says there are already seats available to airlines that don’t recline at all.

“These seats have a different angle of the neck rest so that the passenger is sitting more comfortably,” he says. “Seat suppliers are working on different concepts to solve this issue.”

The industry is also responding with more innovations like convertible seats, which can be expanded or contracted, or even different seating configurations.

This story first aired on PRI's The Takeaway, a public radio program that invites you to be a part of the American conversation.