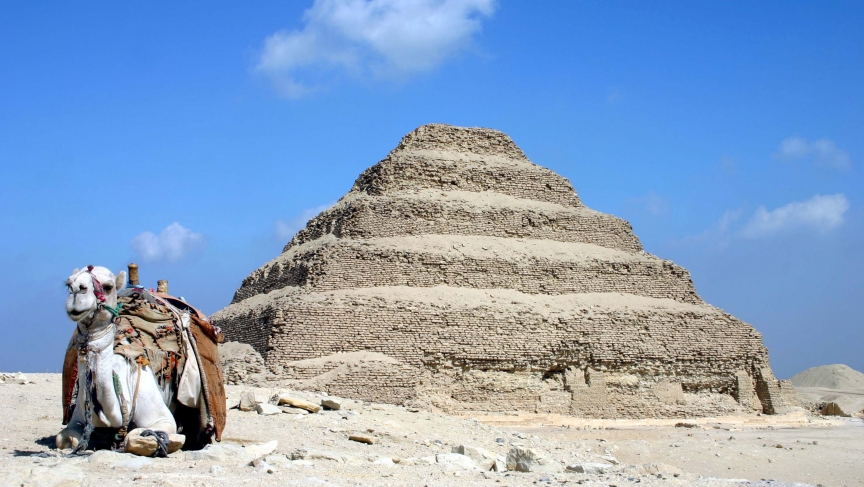 Efforts to repair the Pyramid of Djoser have ignited a controversy among critics, who say the company hired to do the rehab has actually made the situation worse.
Credit:

The Pyramid of Djoser in Saqqara is Egypt's oldest — and most endangered. In fact, it may be too late for the pyramid, because of a botched restoration.

Critics charge the country's government with incompetence for giving the job of restoring the pyramid, which is more than 4,600 years old, to the same company that was responsible for the collapse of a section of it. The company, called Shurbagy, has been operating for nine years, and hasn't successfully completed any of the six projects it has worked on.

According to the Egyptian Independent, protesters have attacked Egypt's Minister of Antiquities Mamdouh al-Damaty for his choice of firms. And they claim the restoration is violating international norms that limit the amount of new construction that can be added.

Who says monkeys don't need to go to school?

Researchers decided to show marmoset monkeys an instructional video in their own habitat. The video demonstrated various foraging techniques that might be useful to them. And the marmosets dutifully lined up in front of the video monitor to watch, kind of like kids in a classroom.

Discovery News reports that monkeys who watched the video were quicker and better equipped to try the foraging techniques than monkeys who did not watch it. This is the first time such a study has been conducted in the animals' native habitat. And it suggests a new way to teach animals important skills, perhaps to help those raised in captivity learn the skills they need before they are released into the wild.

Tiny Scotland is a leader in turning tides into electricity

Tides in the Pentland Firth waterway in northern Scotland move fast for 20 hours a day and are far more predictable than the wind. So the country is in the midst of an ambitious project to build the largest underwater power plant in the world.

Not only would the tidal generators be more reliable than the wind farms that have sprouted off the coast of several European countries, they would also be largely unseen. Eventually, Scotland hopes to generate 400 to 500 megawatts of power — about the same as a medium-sized coal or natural gas power plant.

PRI's Living on Earth reports that, for now, the country is being very careful in installing just four, 1.5-megawatt generators on the ocean floor. It will study the impact of the generators on marine life and the environment through 2016, before deciding whether to proceed with its big plans.

Why Saudi Arabia is considering destroying the tomb of Muhammad

The prophet Muḥammad is central to Islam and his tomb in Medina is one of the religion's most holy sites, close behind the Kaaba — a black granite cubed building said to be built by Abraham in nearby Mecca. Now, an academic has proposed a plan to destroy Muhammad's tomb to the Saudi authorities who oversee and manage the Medina mosque and holy site.  The prophet's remains would be interred in an anonymous grave in a nearby cemetery.

The plan, which is only under consideration and hasn't been formally decided, is intended to stop what some religious leaders consider idolatry of Muhammad, something that is forbidden by Islam. According to the Belfast Telegraph, if the Saudis were to go through with their plan, it could inflame intra-Muslim tensions — especially now that the rise of ISIS in Iraq and Syria has heightened those tensions.

People in Kazakhstan have been reading and writing using the Russian Cyrillic alphabet for years — though some say the letters don't allow for the proper pronunciation of their language. Now, as the country looks to Europe and the West for closer economic and cultural ties, Kazakhstan is considering ditching the Cyrillic alphabet and switching to the Latin script — a move that is sure to enrage Russia's prickly leader, Vladimir Putin.

The World in Words podcast from PRI's The World talked to a University of Kansas professor who's been enlisted in the effort to help Kazakhs come up with a version of the Latin alphabet that will work for them. Professor Allard Jongman, a phonetics specialist, has been working on the project since late 2013.

A new kind of migration is creeping up in #China - the #trafficking of ‘international brides’: http://t.co/kORlKgfxtx

If you live in the Northern Hemisphere, you've undoubtedly noticed the days getting shorter. In a few places, including Barrow, Alaska, the Canadian Rockies and even Wyoming, winter arrived this week, with reports of snow — and the pictures to prove it. According to the Washington Post, 4.4 inches of snow fell on Barrow, the third-snowiest day on record. Just east of Barrow, in the mountains, another five to 10 inches were expected on Wednesday. It seems a little early for boots and parkas, but winter is on the way.