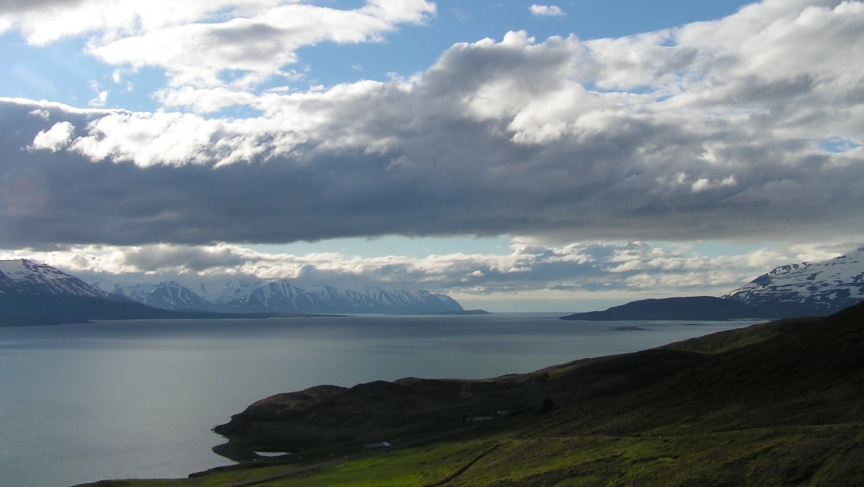 I was totally ready with my playlist for driving across Iceland. It was a binge of Bjork, Sugarcubes and Sigur Ros. But when we got in our little rental car, bad news.

There was no MP3 jack. No jack, no playlist. And no playlist, no roadtrip. That meant one thing. We had to find an actual record store.

Lucky Records in Reykjavik was the place. The guy at the counter sent us over to a wall of Icelandic CD’s near a big easy chair, and a CD player.

The first one I put on was Somber Air, by some band named Epic Rain. Cool name. Funky album art.  But I figured it was just another wannabe band. Boy was I wrong.

Their music is kind of like Tom Waits crossed with cabaret, and a big dose of hip hop. These dark cinematic hip hoppy dreamscapes made me want to hear more. I randomly picked one of their two albums to buy and got a few other Icelandic CDs. Then I  popped Epic Rain's Elegy into the car stereo.

A perfect soundtrack to Iceland

Epic Rain's music and lyrics reflected the imagery — the birds, horses, and stark beauty of the sea and sky. It also evoked the solitude and quiet I found in the emptiness of the land. And it even captured some of what our own inner landscapes might look like too.

I wasn't expecting an Icelandic band to nail both what I was seeing as we toured Iceland, as well as what my own daydreams and nightmares might sound like.

Within days of buying that one CD I had downloaded their EP Murder of Crows. When I got back home, I ordered their other album.

Johannes Palmason, the lyricist and rapper of Epic Rain, is actually of Lebanese descent, not Icelandic. But in retrospect that kind of fits. There’s an outsider ethos to the words he writes.

A trip isn’t a trip without some kind of souvenir.

Most people visiting Iceland come home with a toy puffin or a big wool sweater. I came home with something more in keeping with the literal meaning of "souvenir" — a new favorite band that made me feel oddly connected to the country I visited. A vacation sountrack that reminded me that the point of travel is to find yourself in the midst of the unfamiliar — and that sometimes, you just want to turn it up!