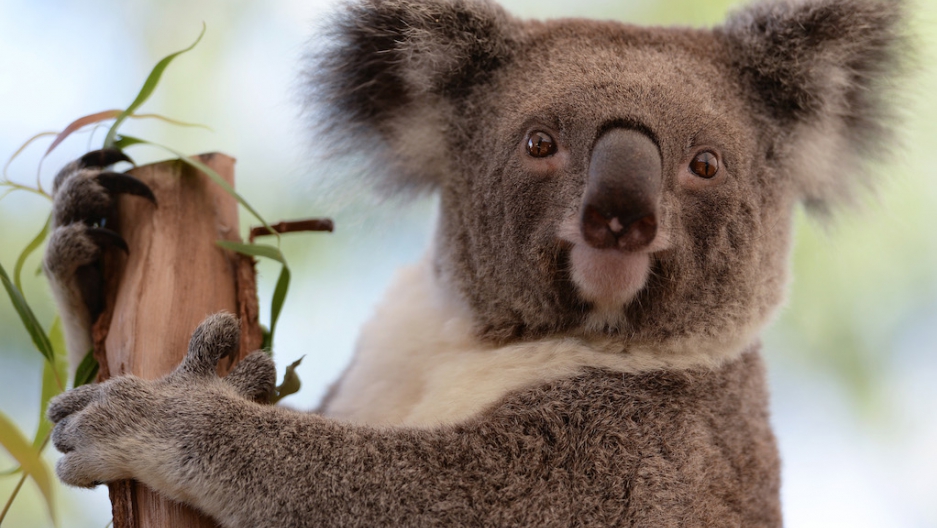 Not only is this nose painfully cute, but it may help save the koala from extinction.
Credit: Greg Wood
Share

BORDEAUX, France — When Janine Duffy first saw Clancy, he was nothing more than an arm poking out of his mother’s pouch.

The tiny marsupial was cute and cuddly, and he was already clued in about life on the outside.

“He would have been listening to us in his mother’s pouch, because she has known us since she was a baby,” says Duffy.

“I firmly believe that he’s grown up thinking we’re a normal part of the forest and that our voices and our smells are 100 percent natural out there. He’s never shown much fear of us and his mother doesn’t either, so I suspect he’s picked it up from her.”

It’s been five years since Clancy first poked his arm out into the bush in southeastern Australia. In that time he’s played a starring role in one of the most comprehensive citizen science projects ever undertaken — and one that may very well help save the beleaguered koala from extinction.

Duffy believes Clancy is the first wild male koala to ever be monitored from pouch to independence without a collar — an accomplishment that could have huge ramifications for conserving a species on the brink of the endangered list.

The Australian Koala Foundation estimates that fewer than 80,000 koalas remain in the wild, though this number could be as low as 43,000.

The koala — a cultural icon Down Under — is in serious decline, suffering from the effects of habitat destruction, wildfires, and a chlamydia epidemic that has decimated the population.

Until now, researchers have tracked koalas in the wild using radio or GPS collars, an intrusive method that involves capturing and releasing animals.

But Duffy has pioneered a technique that could revolutionize koala research, recognizing for the first time that koalas have the equivalent of human fingerprints — on their noses.

The revelation that each koala’s nose pigmentation is unique was a light bulb moment for Duffy.

“Yes, I remember it perfectly,” she said. “I was out in the bush, it was cold and it was very early in the morning. I was looking up at one koala thinking, ‘Gee, I wish I could tell you guys apart’ and I just looked at the nose.

“I ran back to the other koala I’d been with before and I looked through my binoculars and I thought ‘Oh my god! They’re all different.’ It’s amazing now because it’s so obvious, but nothing’s obvious until you find it. I knew this could be important because I’d found a way of learning about koalas without having to touch them.

“Koalas are animals that get stressed easily, and wild ones like to keep their distance from humans. Catching and dragging them out of a tree to do research can be very harsh.”

That was 16 years ago. Since then Duffy, who runs Echidna Walkabout, her own wildlife-based research and tourism company, has been photographing and sketching the noses of some 98 koalas in the forests where she works.

In that time, she’s watched generations of koalas pass through her forests — some, like Clancy and his mother, surviving; others not being so lucky.

“I was starting to see family lines and whole generations of koalas living in the same area of the Brisbane Ranges National Park, but then we had a bush fire and it killed 90 percent of the koalas in our area,” says Duffy.

“It was absolutely devastating. We did follow the 10 percent that had remained but we had to relocate to the You Yangs Regional Park because we’re also a tour operator and the business is funding all our research — we just had to keep operating.

“All I needed was someone who was willing to go out on a limb to check the research to see whether it was worthwhile. Scientists are busy people and I totally forgive the Aussie scientists who haven’t jumped on this because, you know, they must get requests from all sorts of crazies — how did they know that I wasn’t one of them?”

Instead, her 16 years of data caught the attention of two American academics: Jeffrey Skibins, assistant professor in the Recreation, Sport and Tourism Management Department at the University of St. Francis Illinois, and Peg Shaw-McBee, assistant professor of Wildlife and Outdoor Enterprise Management at Kansas State University, who are in the process of validating the research and preparing it for peer review.

Duffy will present the research at an international wildlife management conference in Colorado in October.

Skibins is confident the research is solid. So far, Duffy’s 19,000 photographs and sketches, verified using computer-generated imagery, indicate that her nose identification method is accurate 93 percent of the time.

He says the technique could transform koala tourism in Australia, creating “an excitement around viewing wild koalas similar to whale-watching.”

Duffy envisions a national online koala database, with tourists and locals contributing photographs to help identify koalas and track their movements and behaviors.

“It’s part of my grand dream that every koala in Australia would be known,” she says. “You’d get good data out of that — for instance, evidence of them moving long distances. It’d take the research out of the You Yangs and Brisbane Ranges and across the country.

“But just as importantly, the people who sent these photos in would be invested in that particular koala and that kind of investment in an animal is what moves conservation outcomes.

“Koalas breed well in captivity, so it’s not that that we’re worried about. It’s the in the wild populations that have barely been studied. What we’re looking at now could end up being one of the last stable populations of koalas in Australia. I hope not but that’s what it’s looking like at the moment," Duffy says.

“The thing that drives me," she continues, "is that if we can still show people koalas in the You Yangs in 20 years, then we will have done something amazing. The chances are that’s not going to happen — numbers there are as low as 200 — so we really need to get our butts into gear.

“But you know what? When Australians realize the situation is so dire, they will throw everything behind saving this animal. Australia really needs to get behind this little guy before it’s too late.”