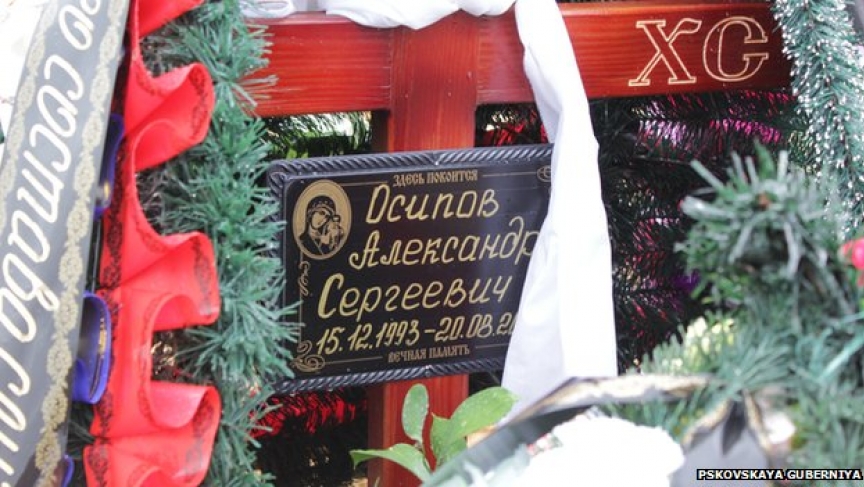 According to a local newspaper in Pskov, Russia, this is the grave of a Russian soldier who died last week. The grave is close to the base of the 76th airborne division cited for heroism by President Vladimir Putin last week.
Credit:

Russia denies it, but the evidence is clear: Russian military units are now actively engaged in combat inside Ukraine.

There is also a string of clues within Russia itself: Russian soldiers are coming home in bodybags, and dozens of wounded are reported to have been flown to St. Petersburg for treatment. Last week, Russian President Vladimir Putin even issued a directive awarding the Order of Suvarov to the 76th Airborne Division for heroism and bravery — without specifying where or when.

All of that was enough for President Obama to say on Thursday that "Russia is responsible for the violence in eastern Ukraine."

But from Moscow, there's only continued denial. “The official line is what it’s been all along,” says Moscow-based reporter Charles Maynes. “Russia has no role to play in Ukraine. Russian forces are not on the ground there, although Russia has promoted attempts, for example, to bring in humanitarian convoys.”

Maynes says generally Russians are buying the story, although some cracks seem to be appearing. The Mothers of Russia protest group says it has documented 11 deaths of Russian service personnel, and says that in each case the deceased's family was also given a military discharge dated before the date of death.

AFP also reported dozens of soldiers' wives staged a protest in the central Russian city of Kostroma on Thursday, demanding to know where their husbands have been deployed. Some of the prisoners paraded by Ukraine say they were based at Kostroma, while other were based at Pskov, near the Estonian border.

Ukraine calls the Russian action a full-scale invasion, but it seems to be something less than that. “One thing that’s clear,” Maynes says, “is that this appears to be a repeat of the Crimea scenario. This is when [in March] Russia de facto sent troops in but didn’t acknowledge them for a long time.”

Maynes says what really matters is the intended goal of the incursion, and there are a variety of possibilities. One is that Russia is simply trying to bolster the flagging rebellion in eastern Ukraine. Another is that it wants to seize control of a land corridor linking Crimea with the main part of Russia.

Meanwhile, as it becomes increasingly clear that Russia is taking an active role in the fighting in eastern Ukraine, freelance journalist Oliver Carroll says the mood in Kiev is one of gradual disillusionment.

“There a sense that ‘We’ve been hung out to dry,’” Carroll says. “[Ukrainians] were expecting more severe sanctions from the US and Europe and they’ve come to understand that those aren’t forthcoming and they don’t understand why.”

The feelings of ordinary Ukrainians toward their new president, Petro Poroshenko, are also mixed. Carroll says Poroshenko is in a difficult situation because, unlike in Russia where presidential power is absolute, Ukraine's corrupt oligarchy wields considerable influence over the relatively weak state. And in the wake of the Maidan protests that toppled former president Viktor Yanukovich, civil society has become an increasingly powerful force.

In April, Carroll spent time reporting in the town of Lugansk in eastern Ukraine and witnessed that lack of supplies and equipment first hand.

And while the lengthy struggle has worn out many of the activists from the Maidan, Carroll says many more are prepared to dig in for another potentially tumultuous winter.

“They have been through so much," he says. "So much blood has been paid that it’s a very difficult prospect at the moment to see that part of Ukrainian society back down.”