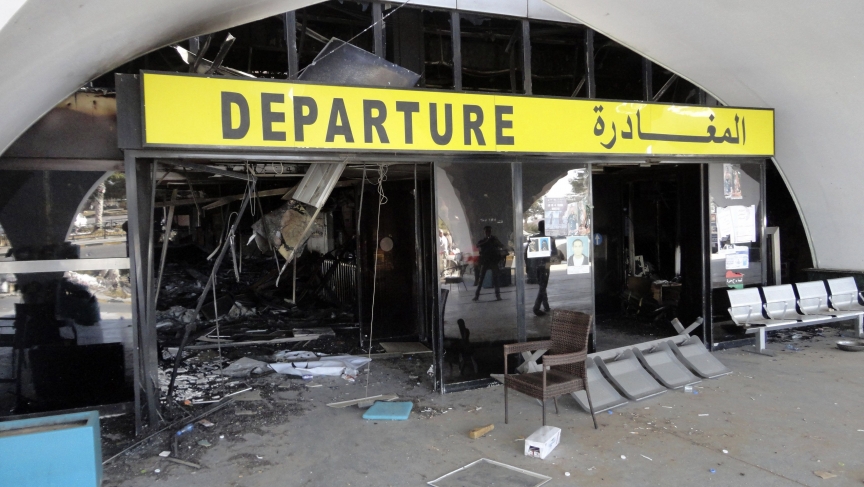 Western airstrikes helped topple Libyan dictator Muammar Gaddafi three years ago. Now the country is dealing with another crisis that threatens to become a full-blown civil war. And this time around, Washington wants no part of the conflict.

The US also doesn't want others to intervene, but it's too late for that. Egypt and the United Arab Emirates reportedly worked together to launch airstrikes against Islamist militias in Libya over the past week — twice.

Those airstrikes caught Washington off guard. "It's really quite striking — almost shocking — that Egypt and the Emirates, two really very close allies with the United States ... conducted these strikes without telling Washington," says New York Times correspondent David Kirkpatrick, who just left Tripoli, the Libyan capital. "It shows they have a high degree of distrust toward Washington in the aftermath of the Arab Spring."

Egyptian authorities have denied involvement, and there has been no comment from the UAE.

There's also another concern for the Obama Administration, and that's whether American weapons were used in the air attacks. The US provides military aid to both Egypt and the UAE, including F-16 fighters.

"I couldn't get a straight answer from US officials," Kirkpatrick says, "but it would raise eyebrows in Washington if it turns out that the strikes were conducted across borders between countries in the Middle East, against US policy, but with US weapons."

Two rival political groups are fighting for control of post-Gaddafi Libya. On one side are the Islamic militants who led the uprising against Gaddafi and who've held a majority in the country's parliament. On the other are former members of Gaddafi's regime who oppose the domination of the Islamists.

The violence between the two factions is the now at the highest level since the overthrow of Gaddafi. "The situation is bad, it's certainly dark," says Kirkpatrick.

But he says there's still a slim ray of hope: "Libya has successfully overthrown a brutal and capricous tyrant who ... ruled the country in a kind of mafia-like fashion for more than 40 years. And the conflict that followed is a consequence of Gaddafi's 40-year rule. It might just be a long dark and painful period that Libya has to get through if they really want to build a modern state."

Which side is the US on? "The US does not want to take a side in this regional battle and the US continues to hope other things will stabilize. But there are obviously forces pulling in several directions at once and I'm not sure how American policy makers think they're going to steer through these waters," says Kirkpatrick.

A previous version of this story incorrectly stated the length of Gaddafi's tenure.