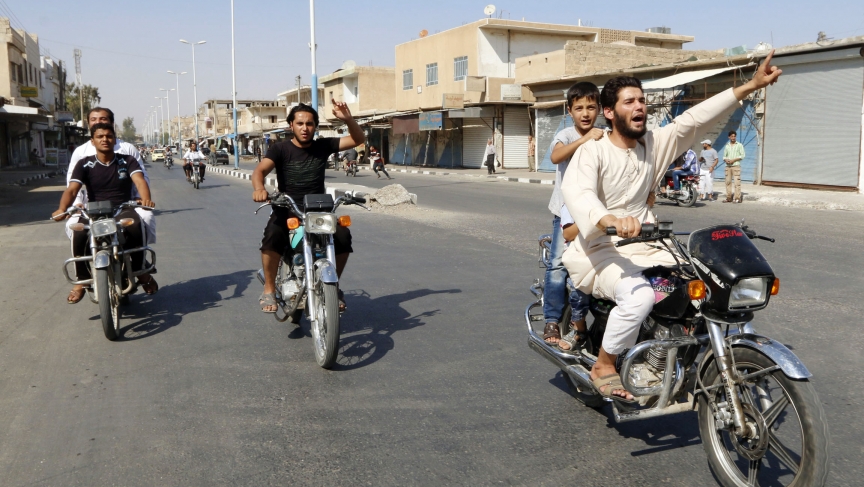 People in the Syrian city of Tabqa toured the streets in celebration after Islamic State militants took over a government air base nearby on August 24, 2014.
Credit:

In launching airstrikes in northern Iraq against ISIS militants, the US already took a major step. Now the Obama administration is considering going even further.

President Barack Obama is looking at options for expanding US military action against ISIS — the armed Islamist group that now calls istelf the Islamic State — including the possibility of doing something it has tried to avoid for more than three years: Opening up a bombing campaign inside Syria.

Gen. John Allen, the retired US Marine Corps commander who served in Iraq's deadly Anbar province, sees the beheading of journalist James Foley as a wakeup call. “Make no mistake, the abomination of [the Islamic State] is a clear and present danger to the US,” Allen wrote in a column titled “Destroy the Islamic State Now" for Defense One, a website that covers defense policy.

Allen isn't alone: High-level US officials have echoed the sentiment. Defense Secretary Chuck Hagel said ISIS poses an “imminent threat” to US interests, while Gen. Martin Dempsey, the chairman of the Joint Chiefs of Staff, said the Islamic State had an “apocalyptic” vision that will eventually have to be “defeated.”

But can the US actually defeat or destroy ISIS? “No, of course not,” says Marc Lynch, a professor of political science at George Washington University.

There are things the US could do to stop the advance of Islamic State militants in Iraq, Lynch says. “But the kind of exaggerated rhetoric that [some Obama officials are] using, really does raise the stakes,” he says. “It could come back to haunt them.”

As an example, Lynch points to Obama's declaration in 2011 that “the time has come for [Syrian] President Assad to step aside." Three years later, Assad is still in power and the US has been widely criticized in the Middle East for inaction in Syria.

It's not just the administration that has fallen into this rhetorical trap, according to Stephen Biddle, a counterterrorism scholar at George Washington.

“Many voices in the American public square right now are saying, 'We must defeat [the Islamic State]. We must destroy [it],'” Biddle said. “And yet, none of the public policy prescriptions that even the most forceful voices in the public debate are calling for are remotely adequate to do that.”

In fact, the US military has already fought against ISIS — or at least against a previous incarnation called al-Qaeda in Iraq. It did so with some 150,000 American soldiers on the ground, a large-scale air campaign and lots of help from thousands of local Sunni tribesmen. But that fight took years, roughly from 2003 to 2008, to come to an end. Clearly, the results then weren't as definitive as desired.

Now, Biddle says, what's being considered is a much narrower deployment of up to 15,000 American ground troops. They would mostly act as spotters for American air strikes and trainers for Iraqi forces. Such a deployments, Biddle says, “excludes anything that could plausibly defeat or destroy [the Islamic State].”

Both Lynch and Biddle said the Obama administration needs to focus its efforts on working with the Iraqi government, which must split the mainstream Sunni population in Iraq from the radicals of ISIS. One way to do that is by giving Sunnis a stake in Iraq's political system. That, they say, was part of the deal that Washington made with Baghdad when it first authorized American air strikes in Iraq a few weeks ago.

The deal was essentially this: The US would provide military assistance to stop the advance of ISIS in northern Iraq, but only on the condition that Iraq's Shiite-dominated government became more inclusive for the nation's Sunnis. But Biddle worries that the deal is falling apart, with the administration showing more willingness to expand American military action in Iraq regardless of Iraq's progress on political reform.

Whatever the administration ultimately decides, Biddle says, "the aims and the means have to be brought into alignment" if the plan is going to succeed. “Right now, we're articulating very ambitious aims, very limited means, and that's not going to work."