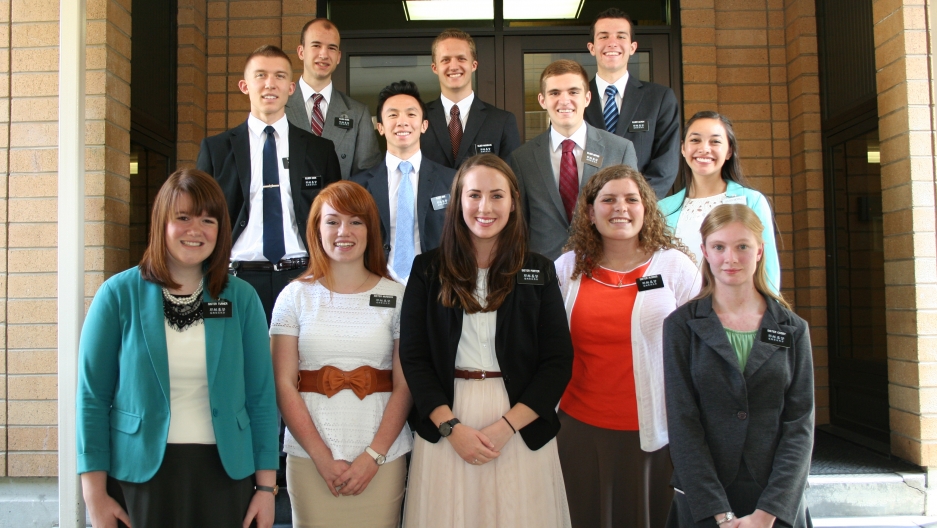 A class of young Mormon missionaries pose at the Missionary Training Center in Provo, Utah.
Credit:

On this day at the Church of Latter-Day Saints' Missionary Training Center in Provo, Utah, 500 fresh-faced young men and women arrive for the first time. Soon they'll venture out across the world to spread their Mormon faith.

These 500 people are just a tiny fraction of the crowd here. “Right now, we’re training about 36,000 missionaries at this Missionary Training Center,” says Spencer Christensen, the center’s head of operations. And more and more of those soon-to-be missionaries are young women.

Back in 2012, the church announced a policy shift lowering the mission's entry age for men from 19 to 18 years old — and from 21 to 19 for women. Women have embraced the change.

“Before that change, the [ratio of female missionaries] would have been close to between 10 and 15 percent,” Christensen says. “It’s more than doubled the amount of young women serving missions and, of course, we’re very excited about that. They’re outstanding missionaries.”

As an attempt to boost the overall missionary force, it's also been a success. The number of missionaries has jumped from 58,000 at the time of the policy change to nearly 90,000 today.

But there's still that gender gap in the ages for missionaries. Why does it exist? “I’ve got to be honest and tell you I don’t know all the reasons for that,” Christensen says with a laugh. Women also serve as missionaries for 18 months while men serve for two years.

Despite the gender differences, many Mormons have celebrated this move as a step forward for the faith. Gender roles have long been clearly defined in Mormonism — traditionally a woman’s first duty was to marry young and have lots of children.

Missions are tough, involving leaving one’s family for the duration of the trip. They live a regimented life with no luxuries like TV and almost no time alone. Of course, there’s no alcohol or premarital sex. And the training is intense: Scripture, gym and many language classes.

They teach 55 of them here at the training center, and no one gets to choose which one they study. One group bound for Taiwan has only nine weeks to hone its Mandarin skills. They also don't get to choose where they go. Some are asked to learn a foreign language so they can focus on converting ethnic minorities in an English-speaking country.

That’s exactly what Mikaela Merrill did. She just returned from a mission in Manchester, England, where she spoke Chinese. Now she teaches Mandarin at the center.

“I loved it — I have a very special place in my heart for Manchester,” she says, recalling her mission trip. “Our purpose in the mission is to help people grow closer to Jesus Christ and learn more about him. So we worked a lot with Chinese students at the universities in Manchester and Liverpool, and we met a lot of people who did grow closer to the savior, did learn more about Jesus.”

Two of Mikaela’s students, Megan Porter and Rachel Cosby, signed up specifically because of the recent change in age rules. Both are 19 years old.

“I’d been thinking since 14 I was going to go,” Porter says. “[The age requirement] was 21 before, and I thought that age was a little hard. ... So when it lowered, that was the tipping point for me to say, ‘Oh yeah, I really want to go.’”

“It has given [women] more of an opportunity,” Cosby says. “It’s made it more of something they can do to start their adulthood the right way — in a righteous way, and following Christ.”

Mike Otterson, the Mormon Church's managing director of public affairs, touts the expansion of opportunities for young women. “There’s plenty of opportunity, but for some who want to do more — maybe who are not ready to get married or whatever — how do you utilize that talent?" he asks. "How do you magnify that, make the person feel completely fulfilled? That’s a healthy discussion to have and it’s happening already.”

But some discussions aren’t so healthy, as one Mormon woman recently discovered. Kate Kelly, a former missionary, led a campaign to allow women to become ordained priests — something that is currently not allowed in the LDS faith. She was recently excommunicated from the church.

"We’re going to have tens of thousands of theologically-trained women injected into the ranks worldwide,” says Otterson, and he's clearly excited about it. But he's also clear that there’s no prospect for them becoming priests.

As for the prospects of evening up the ages and terms for men and women going on mission? Elder Jeffrey Holland, one of the church officials in the missionary department, was asked that question during a press conference. His answer: “One miracle at a time.”