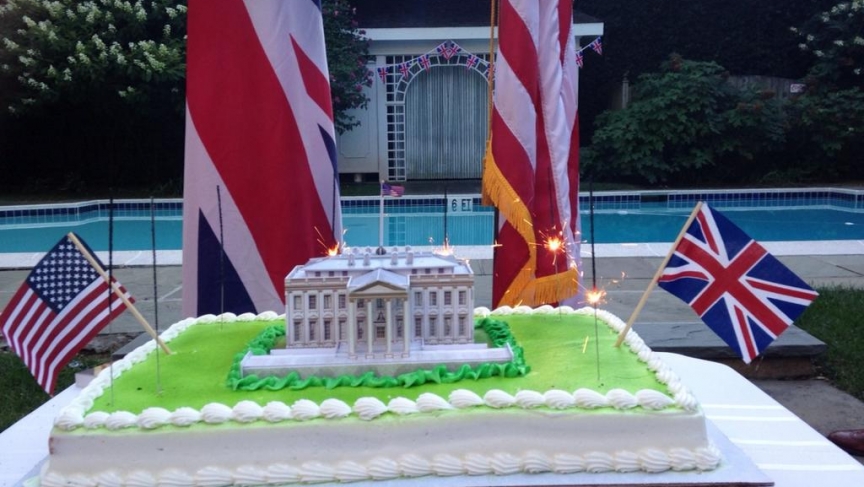 The British Embassy in Washington, DC, tweeted this photo to commemorate British troops burning down the US White House 200 years ago.
Credit:

Which diplomat at the British Embassy in Washington, DC, thought it would be funny to tweet a message "commemorating" the 200th anniversary of British forces burning down the US White House?

The tweet, with this picture of a White House cake and sparklers, quipped, "Only sparklers this time!"

More than 4000 tweets later, the Washington Post noted that Americans weren't quite ready yet to joke about the event, which occurred during the War of 1812.

David Powell (@PowellWrites) captured the mood with his tweet back: "I got a kick out of @UKinUSA's White House tweet. Looking forward to @GermanEmbassy dropping firecrackers on a London-shaped cake in 2140."

The YouTube 'Ice Bucket Challenge' gets challenged around the globe

Who could be against the YouTube challenge spreading across social networks that has celebrities and others dousing themselves with buckets of ice water to raise money to fight ALS? Plenty of people, it turns out.

First, doctors fear the practice could be risky for expectant mothers and those with heart conditions. Then, there are Californians who are living through a drought and using the hashtag #droughtshaming to tweet their amazement that anyone would celebrate wasting fresh water.

In China, protesters in drought-stricken Henan province snapped a shot of themselves raising empty red buckets above their heads, with a message to just say "no" to the ice bucket challenge.

The Guardian reports that a journalist in Hyderabad, India, is proposing an alternative — the Rice Bucket Challenge — which has a more direct charitable link. To do it, you give a bucket of rice to someone who needs it.

When James Foley was beheaded by ISIS terrorists in a video released on social media last week, it sent shivers down the spines of many around the world who have loved ones still being held by terrorists in Syria and elsewhere. But for the family of American journalist Peter Theo Curtis, the nightmare ended over the weekend.

Curtis was taken by the extremist al-Nusra Front nearly two years ago and he was released after negotiations led by Qatar.

The circumstances around his release remain unclear, but his family is ecstatic beyond words. PRI's The World talked to a journalist and high school sweetheart of Curtis — who described him as a a “high school mischief-maker” turned “fine intellect.” So far, Curtis has not made a public appearance or commented about his time in captivity.

Faster than a speeding bullet and more valuable than a soaring bitcoin ... It’s Superman!

Action Comics #1 just sold for more than $3.2 million on Ebay. And for those not in the know, that's the comic book that introduced Clark Kent, Lois Lane and Superman to the world, starting the superhero comic book genre. It is now officially the most expensive comic in the world.

So what makes it so valuable? For one thing, CNET reports there are only about 50 unrestored copies of it left. For another, this copy was near-pristine, because it was kept in a cedar chest at high altitude in the mountains of West Virginia by a guy who bought it from a newstand. So it remained soft, with white pages and brightly colored images. The collectibles dealer who discovered it and auctioned it on Ebay calls it the "Mona Lisa of comics" and says he was proud to have owned it.

Could a change in farming reverse climate change?

Plants depend on carbon to grow — they convert it to energy without releasing it into the atmosphere. But a bedrock practice of modern farming — tilling, or breaking up and turning over the ground — releases carbon fixed in the soil and limits the carbon dioxide that plants can remove from air.

Journalist and writer Kristin Ohlson says there's strong evidence that farmers should stop tilling, for their own sake and for the sake of the environment.

PRI's Science Friday talked to Ohlson about how keeping the soil as undisturbed as possible leaves intact the organisms and systems that feed on carbon and keep it out of the atmosphere. Ohlson says farmers who practice "no till" farming are producing as much yield as farmers who till, and at much lower cost. She estimates that changing farming practice, by itself, could counteract much, if not all, of today's human-induced rise in greenhouse gases.

Millions of Africans (like myself) puzzled by all the hoopla of taking a cold water bucket shower. @penelopemstarr @viewfromthecave

Surfers from California to Mexico are in for some massive waves and challenging conditions this week as Hurricane Marie churns off the coast over the Pacific Ocean. The storm, which isn't expected to pose a threat to land for the next five days at least, packs sustained winds of 135 mph (217 kph). According to the National Hurricane Center, "life-threatening surf and riptides," as well as minor coastal flooding, are possible.