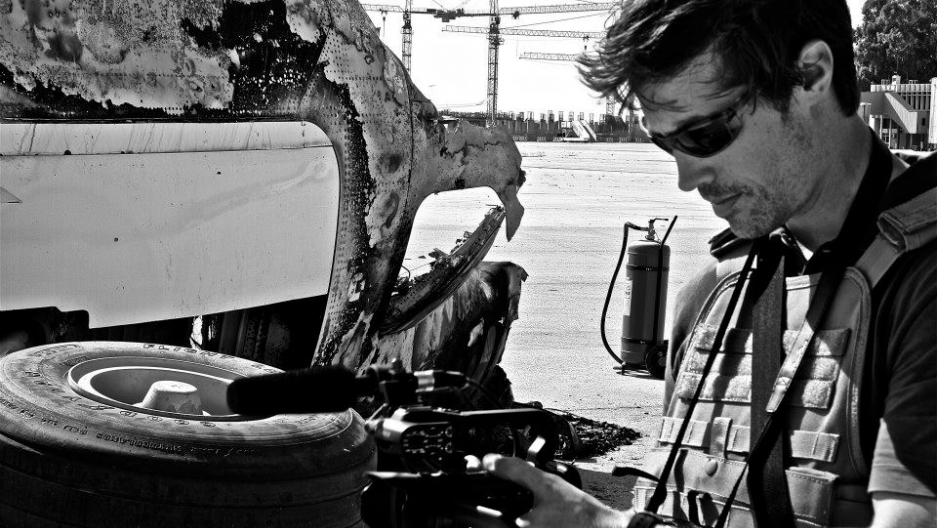 The email was from Nicole Tung, a talented freelance journalist who had been working closely with Jim in Syria, and who was actually waiting for him on the other side of the border in Turkey.

She was relating to us that he never arrived from an assignment and, according to the driver and translator working with him, was taken at gunpoint just outside the area of Taftanaz in northern Syria. It was the first alert at GlobalPost that something was wrong. We had experienced this kind of terrible moment before with Jim when he had gone missing in Libya in 2011. That time he was eventually released after 44 days in captivity. But here we were again. Consumed with worry. Desperate for more facts about what happened and where he was.

That email was forwarded to GlobalPost Co-founder and CEO Philip Balboni and from that moment he personally shouldered the task of trying to get Foley home. Following protocols established from the situation in Libya, Balboni set out to build a core group of stakeholders that included private investigators, experts on hostage negotiation, security officials and several veteran journalists familiar with the terrain. Balboni worked tirelessly for the next two years to assemble every scrap of intelligence and information on Jim’s whereabouts and to relate what was known to the Foley family.

We all did what we could to keep the faith that we would get Jim home safely.

Balboni was gathering layer after layer of information, and had received a demand for ransom of 100 million euros, or more than $130 million, sent by email in December 2013. That followed a "proof of life" exercise in which questions were asked of his captors that only Jim could know the responses to. When they came back answered perfectly, Balboni knew the investigating team was in fact dealing directly with Jim’s captors.

Earlier investigations had led GlobalPost to believe that Foley was held by elements of the Syrian regime, but the ransom demand and other facts later suggested it was more likely Islamist militants were holding him.

Then the most recent and most disturbing communication came on Tuesday, Aug. 12. An email to the Foley family that was filled with anger against America and which declared that Foley would be executed in retaliation for US airstrikes against the Islamic State.

The email was published in full by GlobalPost Thursday with permission from the Foley family.

Nearly two years since that first email that told us Foley was missing, our very darkest fears about his fate were confirmed in a video uploaded to the internet Tuesday and deemed authentic by US intelligence agencies the following day. As everyone at GlobalPost and the larger community of journalists who cover conflict struggle with the news, there is deep soul-searching going on about what we do, how we do it and whether the risks are worth it.

Was Jim reckless? Should we pull back from working in places like Syria where the peril seems to be thickening like a dark, toxic plume on the horizon? Will this change the way we cover stories?

The short answer is: Of course this event will change us. It sobers us. It reminds us that the work journalists in the field are doing is increasingly perilous. It confirms that we have to redouble our efforts to stick to standards and practices for working safely in the field.

In “GroundTruth: A Field Guide for Correspondents,” we codified these standards. Included in it are a set of essays by correspondents focused on "lessons learned" in the field. And among the most powerful and haunting of those essays is the one that Jim Foley wrote after he returned safely from Libya. In it, he struggles with mistakes he made in the field and what he put his family and his colleagues through.

"Many journalists have a desire to get to the front lines to experience what the feeling and taste of the conflict is really like. For some of us who cover conflict, this is an undeniably alluring part of the job, but the front can carry an attraction that is perhaps more of an infatuation with taking risks than with real journalism," he wrote. "My decision making that day was clouded by an adrenaline-influenced desire to be there first, to push the limits further. I had had some success covering the front lines, and I wanted more of that. And in aggressively pursuing that desire, I failed to more carefully assess the terrain. That was the key mistake."

The essay is self-effacing, but Jim concludes with the belief that the work matters, the work makes a difference, and it's work he should keep doing. There was just no question that Foley was going to be back out in the field.

After tracking down that 2012 email from freelance journalist Nicole Tung this week, I reached out to share condolences. We began to talk about her friend Jim, about the work he did and how she felt about her own work going forward.

“Well, I feel compelled to keep doing it. I know, if anything, Jim would want us to keep going. He was just that kind of person. He would ask, ‘Why are you stopping? You’ve gotta go for it!’ I can hear him saying it. And I really think it would be a disservice to him to stop, or to hold back or be deterred. … It was his life and his cause,” she said. Tung and a group of Jim’s colleagues were gathering later at the Half King, a Manhattan pub owned by conflict reporter Sebastian Junger, to raise a glass to Jim in a place he loved.

Junger started a training course called Reporters Instructed in Saving Colleagues (RISC) after his dear friend and colleague Tim Hetherington was killed in April 2011 while reporting in Libya. Junger also knew Foley and invited him to take the RISC course, where he learned first aid and how to handle hostile environments. I asked Tung if she thought Foley was reckless.

“He was not a reckless person. He was just so driven by the story. He was just in it and passionate. He had no death wish. He was the opposite. He had so much life, and a loving family. So what do I take away from all of this? I guess I take away a greater sense of caution, a pause for reflection. Keep asking the questions. Is this road we are going down or this trip we are taking necessary? That’s a good thing. None of us ever want to go down this road again with losing a colleague like this.”

But Tung sounded as certain as Foley when she said she hopes to be back in the field soon, reporting from Iraq: “This won’t stop me. If we stop, that means they would have won. And I don’t want to give the killers the satisfaction of that. They can’t win.”

GlobalPost Co-founder Charles M. Sennott is the Executive Director of The GroundTruth Project, a non-profit partner of GlobalPost, which trains and mentors the next generation of international correspondents.