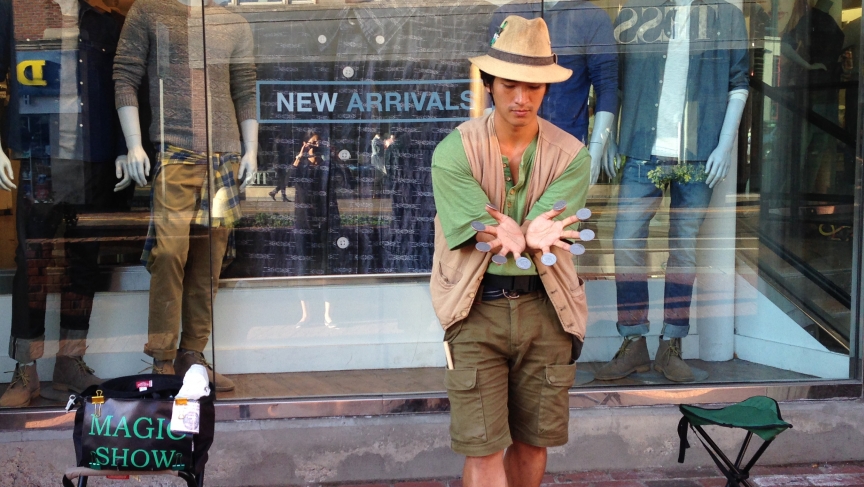 Makoto was born in Japan. His adoptive parents brought him to the US when he was two years old.
Credit:

Summertime in the city means you're likely to come across one specific group of people: Street performers.

That's definitely the case in Harvard Square in Cambridge, Massachusetts. If you've been here, you already know that as the sun hits the sidewalks, so do the performers from all over the US — and the world.

Lately in the square, I've noticed a new face. He’s a small, five-foot-something guy wearing a fedora, shorts and a vest. He stands out because there's always a big crowd surrounding him whenever I walk by. "You guys want to come up to the line. I'll do a little warm up trick for you," he yells.

And he certainly does. He makes cards disappear and end up in his shoe. He makes small rubber balls vanish and then takes them out of his mouth. He balances coins on the tip of each of his fingers making the shape of a flower. His tricks are the best I have ever seen a street performer do.

"If you believe everything your eyes tell you, you'll believe a lot of stuff in the world that just isn't true," he says. It's an ironic thing for this 22-year-old named Makoto to say. His name means "honesty" in Japanese. But he says he loves the inadvertant joke.

"I actually like the meaning of my name," he says. "I lie for money. Magicians are inherently deceptive and my name means honesty. It's a neat name to have."

Makoto says he wouldn't be a magician if it wasn't for one important event in his life. "I was born in Japan and I was in an orphanage almost immediately because my biological mother had a mental disorder that made it impossible for her to care for me," he explains.

When he was two years old, a couple adopted Makoto and brought him to the US, where he grew up in California. But Makoto's adoptive mother is also from Japan, and his parents wanted him to get to know the place he was born. So, every summer, he would go back to Japan for summer camp.

"It really was a culture shock," he recalls. "The kids there wore well-fitted uniforms — white shirts and shorts for the guys and I think dresses for the girls — and I was there in jeans and a big, baggy T-shirt, very suburban Californian."

He doesn't know what his life would be like if he'd never left Japan, but he says he probably wouldn't have been a magician. From his experience, the Japanese don't really connect all that well with street magicians. When he tried performing there, most people didn’t stop to watch.

That’s not like his experience in South Korea. "My whole show was about five minutes long and I had 40 to 50 people watching me back-to-back. I think I made $70 an hour," Makoto says. “A friend of mine said that, in Korea, if they see someone who looks like he’s doing something, they assume he’s famous and they stop and watch."

Back here in Cambridge, once you see the expressions on the faces of the people watching him, it's difficult to imagine Makoto doing something else. But as fall approaches and the weather gets colder, the street performers start to pack up.

Makoto is already back home, finishing up his studies at the University of California, Riverside, where he's a creative writing major. He says his goal is to come up with more of his own tricks and, one day, make a big name for himself.

So if you happen to be in Cambridge next summer, make sure you check out the guy in the fedora and shorts. He might not be performing his magic on the sidewalk for long.