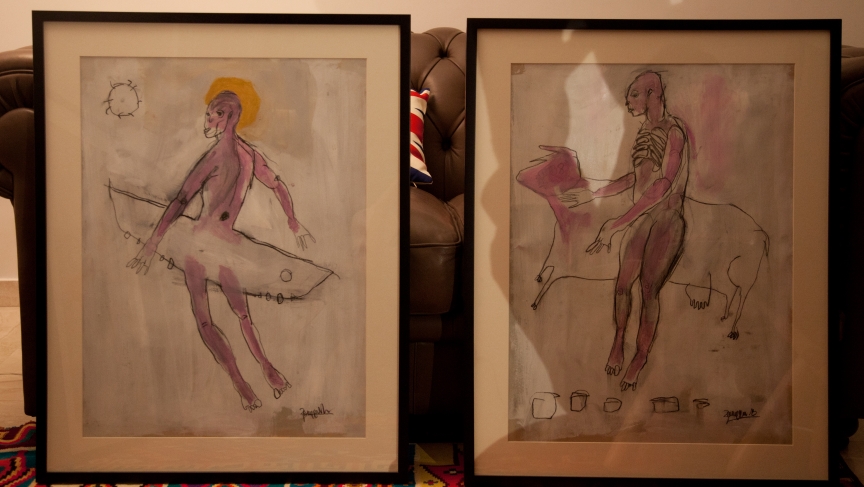 One former soldier recalled the sight of livestock wandering around abandoned villages. Their owners had fled and left them behind. Sofiane Zouggar made these haunting images.
Credit:

Anytime I had a conversation with a cab driver in Algiers about elections or unemployment, they’d always drop a reference to "the Black Decade" — the civil war in Algeria that ended more than 10 years ago.

Algerians can recall the curfews and massacres, and friends and family disappearing after going out for bread. People here still live with the fear that any instability will spark another war. That’s why shops still close at sunset and the capital is still a ghost town at night. Dozens of towns where massacres took place in the 1990s remain abandoned.

If the Black Decade is anything but a distant memory for Algerians, it's a memory that's constantly being suppressed.

“Even when they try to remember it, they remember to forget it,” says Sofiane Zouggar, an artist based in Algiers. “The idea of change, you know, it’s become a fear. We don’t want a Black Decade again.”

Zouggar is on a mission to force Algerians to address the Black Decade and help them move past it. For his latest project, he interviewed fighters on both sides of the war and recorded their stories, whether on paper, in photos or on canvas.

One former soldier he interviewed recalled the sight of livestock wandering around abandoned villages. Their owners had fled and left them behind. The image lingered in the soldier’s memory.

“He said when [he] saw these animals, [he] saw phantoms of these people,” Zouggar explains. “They left their lives behind in this village, looking for another place with security.” So he used the theme of the cows in some of his paintings, creating haunting, evocative images of lone animals circling abandoned villages.

During the project, Zouggar has come face-to-face with the people he and other Algerians had feared the most during the Black Decade. Even as the process has, at times, been traumatizing all over again, he's intent on confronting the past and using his art to get Algerians to do the same.

“When you have a scar, the best way to get over it is to talk about it with someone — with the person who made that scar — to close it,” says Marhoun Rouggab, a young entrepreneur in Algiers. He's also an art collector with an interest in Algerian art that depicts the Black Decade. “I think the artists are exposing the scars. Unfortunately not everybody is seeing it — only a very small number of people.”

That’s because the only art galleries in the country are funded by the Algerian government — a government that has treated the Black Decade as taboo. The Ministry of Culture hasn’t approved a single exhibition addressing the topic. That, compounded by the lack of private gallery space in Algeria, means that most Algerians will never get to see art like Zouggar’s.

Zouggar says people ought to hear these stories. Many of the people he’s interviewed, former militants and soldiers alike, still call him. They want other Algerians to understand and to perhaps move on.

“I wanted to share these stories, to show it to the people that are concerned with this period,” he says. “If you know these special personal stories, you’ll have a better idea about what’s happened.”

A German TV correspondent who covered the war in Algeria once wrote something that haunts me.

“It’s like after a war and yet it’s completely different,” he said. “Because you don’t see any destroyed buildings. The facades of the buildings are intact; it is the souls of the people that have suffered enormous damage.”