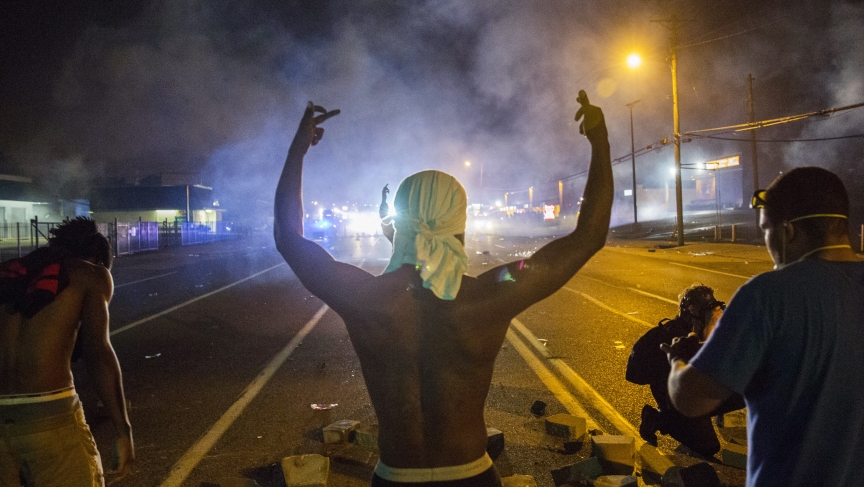 Demonstrators face off with police after tear gas was fired at protesters reacting to the shooting of Michael Brown in Ferguson, Missouri August 17, 2014. Shots were fired and police shouted through bullhorns for protesters to disperse, witnesses said, as chaos erupted Sunday night.
Credit:

In the streets of Ferguson, Missouri, unrest continues as questions over the death of 18-year-old Michael Brown remain unanswered.

Over the weekend, the release of a surveillance video, which law enforcement officials say shows a looming 6-foot-4 Brown shoving a convenience store clerk before stealing cigarillos, reignited anger in the community.

A preliminary private autopsy revealed that Brown was shot six times, including twice in the head. On Sunday, Attorney General Eric H. Holder said the Justice Department would conduct its own independent autopsy.

On Sunday, chaos erupted in the St. Louis suburb when, according to the police, a Molotov cocktail was thrown by protesters, gunshots were fired at police, and buildings were looted. At least one person was shot. Police responded with smoke canisters and tear gas. Despite the violence, Governor Jay Nixon said the overnight curfew was effective in upholding relative calm.

But Sunday night marked the most violent confrontation between the police and the community yet, prompting Nixon to deploy the National Guard early Monday morning.

“Tonight, a day of hope, prayers, and peaceful protests was marred by the violent criminal acts of an organized and growing number of individuals, many from outside the community and state," Gov. Nixon says in a statement. "Given these deliberate, coordinated and intensifying violent attacks on lives and property in Ferguson, I am directing the highly capable men and women of the Missouri National Guard to assist [Missouri Highway Patrol Supt.] Colonel Ron Replogle and the Unified Command in restoring peace and order to this community.”

Nixon also revoked the curfew, but a new restriction on assembly was put into place. Capt. Ron Johnson of the Missouri Highway Patrol, who has taken over the local police operation, spent time this weekend appealing to the community in Ferguson, making an appearance before a packed audience at the Greater Grace Church.

“I wear this uniform, and I should stand up here and say that I’m sorry,” Johnson said to a long round of applause. “This is my neighborhood — you are my family, you are my friends and I am you. I will stand and protect you, and protect your right to protest. And I'll tell you right now, I came in here today and I saw people cheering and clapping, and this is what the media needs to put on TV."

St. Louis Public Radio Reporter Jason Rosenbaum is on the ground in Ferguson, and was there when Johnson spoke.

"I was actually at that rally, sitting about five feet away from Capt. Johnson," says Rosenbaum. "I don't use these words lightly: It was an unbelievable speech that brought the crowd to its feet."

Though Johnson's words instilled an initial feeling of hope and calm in the community, Rosenbaum says after 9:30 Sunday night, things in Ferguson "spiraled completely out of control."

"The words that both Capt. Johnson and everybody else at that church spoke seemed to be a distant memory with tear gas, broken windows and every other force of destruction you can imagine," Rosenbaum says. "As soon as I saw the TV screens after coming back from that rally, I knew that it was an inevitability that the National Guard was going to be called in."

Rosenbaum says that there are currently dozens of FBI agents combing the streets of Ferguson for information, and St. Louis County is also conducting its own investigation.

"People want quick action for this, but the reality is these investigations take a lot of time to complete," he says. "There's a lot of witnesses that need to be talked to, and a lot of evidence that has to be looked at by investigators. The people that want an immediate indictment or some sort of action, I don't think they're getting that right now and I don't think they're going to get that just because of the way investigations work."

Since the beginning, Brown's death has been marred in controversy, which has led several different law enforcement agencies to step in.

First, the local Ferguson police force responded to the protests and upheaval, and then St. Louis County took over. On Wednesday, the Missouri Highway Patrol stepped in to manage crowd control in the area. At that point, it seemed like calm had been restored, but over the weekend, violence returned to the streets.

"I don't think people know what to expect with the National Guard — this is a military force that is usually used to either respond to natural disasters, or in some cases they're jettisoned out to foreign conflicts," says Rosenbaum. "I don't really know what the reaction to the crowd is going to be."

Nixon says the National Guard will be used to secure the command center, so more law enforcement can be deployed to respond to crowds and crises.

Rosenbaum says there will likely be no problem for those who have so far remained peaceful during demonstrations. But he does point out that some protesters are intentionally breaking the government-mandated curfew and trying to confront governmental authorities.

In many ways, Brown's death has now reached beyond the borders of Ferguson.

"The people that I've talked to that have been protesting, some of them are from Ferguson, but a lot of them are from the surrounding communities, which are either partially or predominately African-American," Rosenbaum says. "This has now stretched beyond Ferguson's borders, and is now not only an entire St. Louis issue, but I think as you're seeing, it's become national and international."

Churches throughout Ferguson have played a major role in trying to solve this crisis by attempting to build bridges between local officials and the community at large. St. Stephen’s Episcopal Church, where the Reverend Steve Lawler leads a multiracial congregation, has become a central food pantry for the community since the protests began.

Rev. Lawler says, in many ways, the community's response to the crisis happens moment-to-moment.

"We have become a food collection place so the parish hall is filling up with food, and people all over the community are ready to help out," Lawler says.

Individuals of all ages and walks of life are trying to lend a helping hand in Ferguson. Lawler says a small, 3-year-old girl came by with her grandmother to offer a can of food and a crayon drawing of people eating. A man whose son was murdered less than three years ago also came by to offer food. Lawler says he showed a resounding sense of compassion for the family of Michael Brown, for the police officers, for the community and for the neighborhood.

"The congregation has been really great and responsive," says Lawler. "A number of people, myself included, are starting to feel some of the fatigue. The shock came immediately, but the fatigue is there now for more people."

In addition to fatigue, Lawler says that his congregation is "heartbroken" and "shocked" over Brown's death and by the events playing out in the streets of Ferguson, and are "confused" about what will happen next. Additionally, the reverend adds that the voices of concern are coming from individuals of all races.

"People who are on the ground and who live in Ferguson are sharing many of the same questions at many of the same gatherings," he says. "There's a lot of different responses — everything from, 'We've got to get the violence settled down and figure out how to manage that' ... to 'I don't understand why people would loot and I don't understand why these small business owners are the victims.'"

The last week has been a challenge for the people of Ferguson, but Lawler says the community is looking forward to the grand jury's findings.

"The community is not divided in most ways," says Lawler, who adds that Ferguson is a community that has a history of being multi-racial. "There's some hope, but each night that we have destruction and violence, it's a real setback."