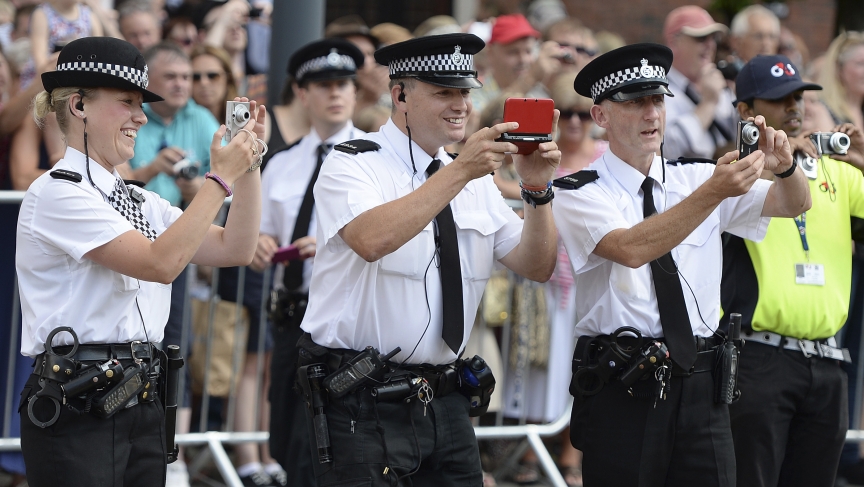 Police officers take pictures of giant puppets as they move through the streets of Liverpool, northern England July 25, 2014.
Credit:

In 2012, 409 people were shot and killed by American police in what were termed justifiable shootings. In that same year, British police officers fired their weapons just once. No one was killed.

In 2013, British police officers fired their weapons all of three times. No one died. According to The Economist, "British citizens are around 100 times less likely to be shot by a police officer than Americans. Between 2010 and 2014, the police force of one small American city — Albuquerque in New Mexico — shot and killed 23 civilians; seven times more than the number of Brits killed by all of England and Wales’s 43 forces during the same period.

The Economist argues that the reason for this disparity is actually quite simple: guns are comparatively rare in the UK. Most cops don't carry them and criminals rarely have access to them. The last time a British officer was killed by a gun was in 2012. In the US last year, 30 police officers were shot and killed in the line of duty.

In December, PRI's The World reported on Icelanders grieving after their police force killed a man — for the first time in the country's history as a republic.

In Beijing, you can commute on your recycled plastic bottles

No, this isn't a manufacturing breakthrough that recycles bottles into rollerblades for commuters. This new tech is even easier on your legs. Beijing has installed 34 machines that turn your plastic bottles into free passes to use on public transit.

Pangea Today reports that the machines scan and classify your bottles, so your pass is linked to the recycling value of what you put in. The beauty of the scheme is that it's a double environmental incentive — it encourages recycling and public transit. Officials hope it will increase the 15,000 tons of bottles currently recycled in Beijing each year. And if you aren't a commuter? Then you can get a phone card instead, so you can stay home and lower your carbon footprint that way.

Researchers turn measles into a weapon to fight cancer

Doctors at the Mayo Clinic in Minnesota may have developed a tool for the treatment of previously untreatable forms of cancer. It involves using versions of the measles virus to attack and kill cancer cells. During a phase one clinical trial, a patient with previously incurable multiple myeloma went into complete remission after being treated with a high dose of the measles virus, PRI's Science Friday reports.

The idea, called oncolytic virotherapy, isn't new, but this is the first time it's been documented to work. The therapy is based on the fact that cancer cells have comparatively weak immune systems, making them susceptible to infections. The measles virus was trained to target and grow on cancer cells, making it safer and more effective. The research is in very early trials and is a long way from being a widely-accepted treatment. But doctors at Mayo are moving ahead with a large, phase two trial, in order to test their early success.

In Liberia, Ebola is killing people who don't even have the disease

Muhammed Sheriff's sister died of a pregnancy complication in Liberia, though it wasn't a fatal condition. The real complication was that three clinics and three private doctors were unwilling to help her, at any price. They were too afraid of contracting Ebola.

Liberia has had 786 cases of ebola so far, according to the World Health Organization, and more than half of those patients have died. Buzzfeed reports that several dozen health care workers have died and basic supplies are running low, spurring some of Liberia's hospitals and clinics to close or turn away patients. The other side of the crisis is that some Liberians are scared of visiting clinics because they don't understand why so many are dying in them. The result is that Liberians are now dying of treatable diseases and injuries ... because of Ebola.

On this Scottish island, you can fully unplug. But not for long

According to some, one of the greatest benefits of the Isle of Coll off the coast of Scotland is its relatively complete lack of cell phone service. Others say it's actually one of the biggest drawbacks. Now, that is set to change in the near future, through a partnership between the Scottish government and the local population of about 200 people that will pay to install a cell phone tower and finance its ongoing operation.

PRI's The World talked to some island residents about what they like and dislike about their current cell phone-free status. Many worry it will hurt the island's tourism industry, which touts the need for people to unplug. Other business owners, though, are looking forward to having better Internet and communications access, so they can keep up with the competition.

Whites half as likely (37%) as blacks (80%) to say Ferguson raises important issues about race http://t.co/45tqSOskEY pic.twitter.com/GeGoF65YgZ

A volcano in Iceland is making a whole lot of American and European airlines very nervous. With memories of an eruption four years ago that crippled international aviation for days, they are worried about signs that a huge volcano in Iceland could blow any day now. According to Business Insider, the risk of eruption at Bardarbunga, a volcano in Iceland located under Europe's largest glacier, is now at the second highest of five threat levels. The volcano is under 700 meters of ice, so an eruption would require a lot of energy. If it does break through, it would likely produce a large plume of ash and cause flooding as the glacial ice melts.

Editor's Note: This Global Scan was updated to include a link to The World's story on Iceland's grief after the country's police killed a man for the first time in its history.