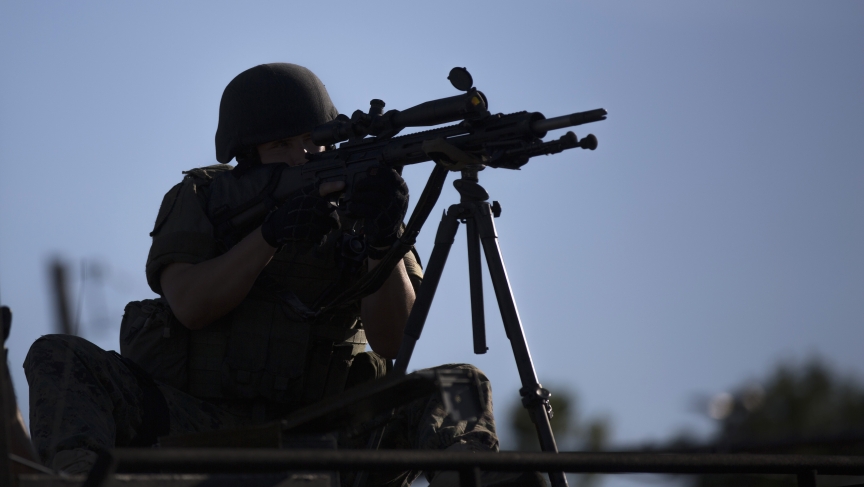 A police officer aims his weapon while demonstrators protest the shooting death of teenager Michael Brown, in Ferguson, on Wednesday.
Credit:

Veterans of Iraq and Afghanistan are speaking out against the militarized response of the police in Ferguson, Missouri, earlier this week.

Police in camouflaged uniforms, with helmets, body armor, armored vehicles and all kinds of guns confronted protesters outraged at the killing of an unarmed teenager.

‘Ferguson's cops are armed like I was in Iraq.’ That’s the title of a new piece in the Daily Beast by former Army Capt. Phillip Carter.

Carter served a year in Baquba, Iraq, in 2005 and 2006, as an adviser embedded with Iraqi police. He’s also a lawyer, and in 2009 served as a deputy assistant secretary of defense. He’s now a senior fellow at the Center for a New American Security in Washington.

“They don’t have the on-call artillery and helicopters that we did,” Carter says. “But in terms of what they’re carrying, it’s almost exactly the same gear. The same body armor, the same rifles, and in some cases the same vehicles.”

“It’s a jarring comparison,” Carter says. “It doesn’t sit well, and it makes me wonder whether the militarization of our police force has gone too far.”

He calls the response "absurd."

“This is not a war zone. These are not insurgents. These are our own people. And the police there ought not use the same level of force ... that we did in Iraq.”

“There’s a sense that this isn’t the country we fought to protect,” Carter adds. “That we don’t want to see our streets become war zones, and that there’s something jarring about seeing the same force we used as part of an occupation used at home, whether it’s in Ferguson or Los Angeles or any other city around the country.”

Carter says police departments here could take a leaf from the army’s counter-insurgency field manual, as well as taking the army’s weapons and armor.

"Sometimes, the more force is used, the less effective it is."

Thursday night, after an outpouring of criticism over the level of military response, police took a much softer stance — and demonstrators by all accounts were mostly peaceful.