In a federal courtroom in McAllen, Texas, 27 people are awaiting criminal charges. Nearly all are Mexican nationals, but many claim to have spent years in the United States. Some say they grew up here.

They’ve all been caught entering or re-entering the US by illegally crossing the Rio Grande River. They sit shoulder-to-shoulder on benches, most in T-shirts and jeans. Their shackles, taken off for the hearing, are piled in the back of the courtroom.

The magistrate judge in McAllen, Peter Ormsby, reads all the defendants their rights together at once —  the right to remain silent, to a trial, to an attorney. The men, and a few women, wear headphones so they can listen to a Spanish interpreter.

Then, one by one, the defendants rise and face the judge. He addresses them individually but asks the same questions: Did you knowingly enter the US illegally? Do you understand the charge? How do you wish to plead? “Culpable,” they all say: Guilty. Each exchange takes about 30 seconds.

Then the judge goes back down the line and a prosecutor makes a sentencing recommendation dependent on prior offenses. The public defender asks for something lighter. The judge settles on something in between.

Ormsby is compassionate with most of the defendants, making gentle pleas to respect the law. “I assume you were trying to come here to work to support your family," he says to one migrant. "But please don’t come back again illegally.”

Then he issues the sentences. One guy gets 180 days in prison. Another gets off with a warning. Most are sentenced between one and three months in prison. Within 90 minutes, 26 of the 27 people are off to serve their sentences, ushered out a back door by US Marshals.

This system of fast-tracking immigration cases started nine years ago. It has made criminal courts like the one in McAllen a common destination for migrants who are caught crossing the border illegally. Now, migrants caught sneaking across the border are almost certainly going to jail. Critics say this style of border justice is a “cattle call in the courts.”

“It was put forth under the Bush administration as a way to increase prosecutions,” says Ruthie Epstein, a legislative policy analyst with the American Civil Liberties Union in Washington.

It has done exactly that: The latest Justice Department numbers show more than half of all government criminal prosecutions are against people violating immigration and customs laws. Go visit a federal prison and you’ll find nearly as many people serving time for immigration offenses as drug offenses. The average sentence for illegal re-entry into the US is 19 months behind bars.

This zero tolerance approach, sometimes called Operation Streamline, has been used off-and-on in districts in Texas, Arizona and New Mexico. Federal prosecutors in California rejected the approach, choosing whom to prosecute rather than automatically prosecuting everyone.

The federal government argues that pushing migrants into the criminal system is a deterrent: If migrants know they’ll almost certainly face jail time, they’ll stop trying to cross the border illegally. But Epstein argues there's no need to create a separate criminal process for immigration cases.

"We have a civil system that is in place to deal with unauthorized migration," Epstein says. “The [Obama] administration has an opportunity to make a choice, a choice whether to funnel people into the criminal justice system using taxpayer dollars to prosecute, to incarcerate people who are going to be deported anyway, or just to send them straight into the civil system where the ultimate outcome of their case, if it’s deportation, will happen regardless."

She also argues there's there’s no data to suggest that Operation Streamline is really deterring migrants.

The Department of Homeland Security didn’t respond to emails regarding Operation Streamline. A Justice Department spokesperson said they don't track the statistics we were requesting.

Consider an anecdotal example: On another day, in a federal criminal court in Brownsville, Texas, a judge sentenced a migrant who claimed he came up from Mexico to help his four kids — here in the US — get ready for school. The judge sent the defendant back to Mexico, not prison. But if the migrant showed up in his court again, the judge said, he’d get at least a year in jail — and maybe more.

Hector Garza, a federal public defender in Brownsville, says the man was still likely to come back illegally. “I would do it if my children are here and they keep deporting me," Garza says. "My children are here, my wife is here. I am going to try to be with them. And we see this all the time. It’s unfortunate, but it’s a fact. It happens over and over again."

Jodi Goodwin, a private immigration attorney, is also sure he'll be back: “You take me away from my kids and tell me that I can’t cross this line, damn straight I’m going to cross that line. And I’ll cross it many, many, many times.”

She says she's not in favor of open borders, but she still argues there has to be some discretion about who gets sent before the judge. Most of the migrants she sees are simply trying to support their families in the US and shouldn't be in criminal courts.

There’s also a finite amount of resources for what comes next in the process: US taxpayers are paying an estimated $1 billion a year to incarcerate people convicted on criminal immigration charges. Many are housed in private, for-profit prisons.

It's not even clear when and where Operation Streamline is in effect. The program seems to come and go from the courts without people knowing if it's officially being implemented or halted — even for those inside the court system.

“We cannot find out ahead of time. If [US authorities] are going to enforce it, they’re not going to tell us,” says Hector Garza, the public defender. “We see the difference in the numbers of clients we see in court.” 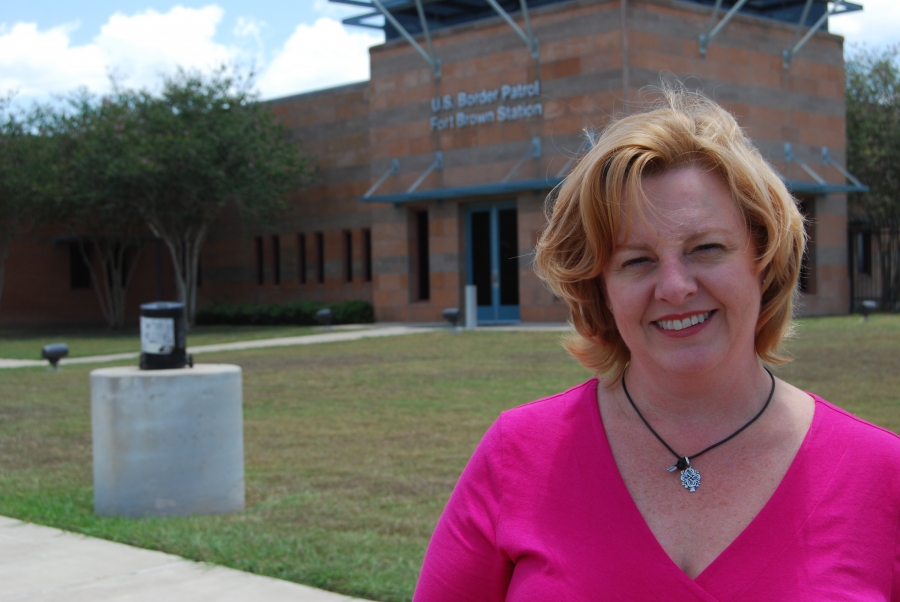 Immigration attorney Jodi Goodwin argues that too many migrants are being tried in the criminal courts, that more discretion should be applied for whom to prosecute.
Credit:

“It’s completely shielded, everything that we hear is rumor via word on the street,” said attorney Jodi Goodwin. “We get that information from courthouse banter back and forth with the [Border Patrol] agents that come in to prosecute the cases. ‘Hey, what’s going on? Hey, did you hear that Streamline is coming back? It’s going to be busy.’ That’s how we find out the information.”

None of the several magistrate judges in the Rio Grande Valley contacted about the process responded to interview requests. When asked if Operation Streamline is currently in effect in the valley, Kevin Oaks, the area's top Border Patrol agent in the area, seems uncertain.

“I don’t think we do much Streamline,” he says. But he can't say that definitively. A lot of agencies are involved in making the determination, and he just became chief of this section in April.

None of this confusion surprised Ruthie Epstein with the ACLU: “It’s less important what we’re calling it, than whether the prosecutions are actually happening or not." And they are. On that, at least, everyone can agree.