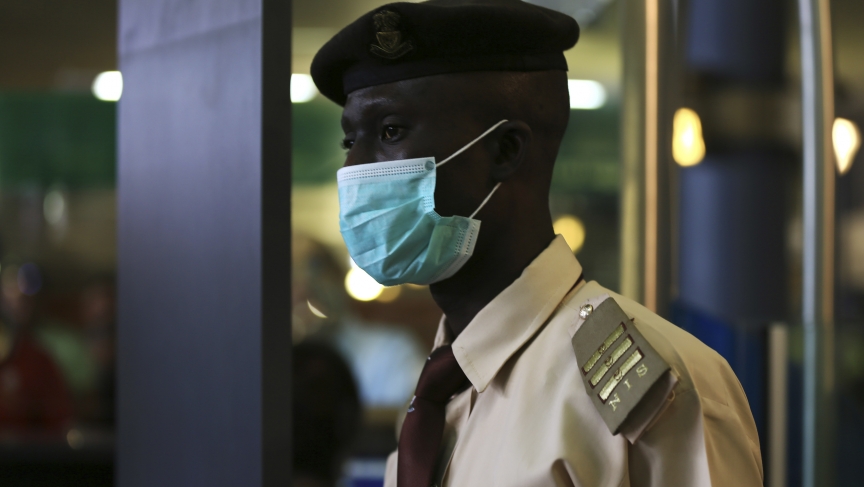 An immigration officer wears a face mask at the Nnamdi Azikiwe International Airport in Abuja, August 11, 2014. Nigeria's commercial capital Lagos has 10 confirmed cases of Ebola, up from seven at the last count, and two patients have died, including the Liberian who brought the virus in, the health minister said on Monday.
Credit:

The medical relief agency Doctors Without Borders is used to battling disease and working in war zones. So when the agency says the Ebola outbreak in West Africa is like "wartime," pay attention.

Now that war is spreading even farther: Nigeria has reported Ebola cases, joining Guinea, Sierra Leone and Liberia in the outbreak.

BBC reporter Tomi Oladipo says health officials at Murtala Muhammed Airport in Lagos have begun screening incoming and outgoing passengers in response to the danger. "The passengers seem to be fairly calm," Oladipo says. "Officials brief them when they arrive and tell them why they're being screened. They have to fill out some forms telling about any possible symptoms of illness that they've had, and I saw them as well using thermometers to check people’s temperatures — just to be sure that nobody who's ill with the Ebola virus is coming in."

On the whole, Oladipo says, "Nigerians are generally concerned. I wouldn't say there's a state of panic. But people are concerned and everywhere you go, there's talk about how to stay safe."

And for good reason: The population of Lagos, Nigeria, is 21 million — almost the same as the populations of Guinea, Sierra Leone and Liberia combined. That makes the city a potentially fertile petri dish for Ebola.

"There are worries that if the virus was to come into this densely populated, dirty, chaotic city then it would just cause havoc," Oladipo says. "That is the main worry, and I think that is the concern of the authorities as well, which is why they are trying to contain the initial cases and make sure the virus doesn't spread beyond those people. Because if it does get out into the public, into the rest of Lagos, it’s almost unimaginable what would happen."

Nigeria's health care system is considered more advanced and better equipped to deal with an Ebola outbreak than Guinea and Sierra Leone, but it faces its own severe challenges. "At the moment you have a doctor's strike that's been going on for months," Oladipo exlpains. "In fact, the Nigerian president just announced that 16,000 of those doctors will be sacked as a result of their staying away, especially during this crisis, so that's the challenge that Nigeria faces at the moment. So this is a tough one for Nigerians to face."