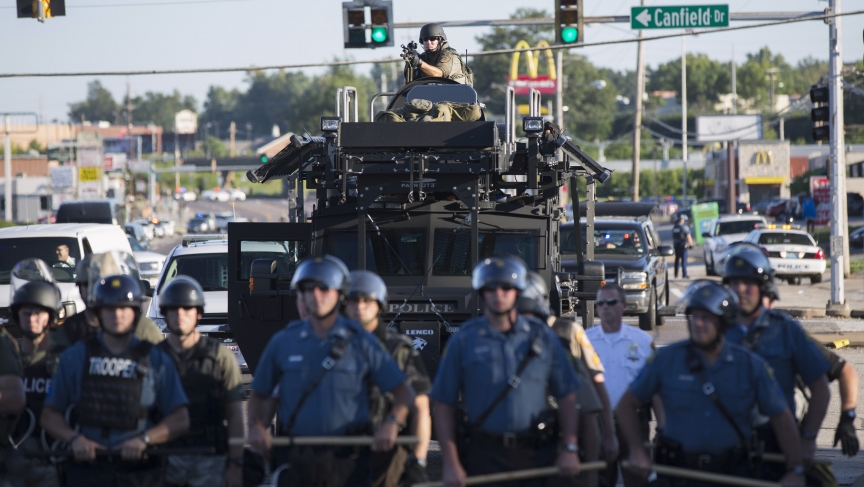 It’s been five days since the fatal shooting of 18-year-old Michael Brown by a police officer in Ferguson, Missouri, and tensions have only increased between demonstrators and police officers — sometimes causing violent clashes.

On Wednesday, the deployment of armored vehicles and scores of police in military-style gear during the day led to use of tear gas and the arrest of journalists during the evening. Jon Swaine, who has been reporting from Ferguson for The Guardian, says the military equipment is tough to explain to people back in the United Kingdom.

“The way I explain it is that, after several years at war overseas, the United States has begun, as it scales down those efforts, transferring and sometimes selling military equipment and hardware to regional police forces," Swaine says. "We might not have, until now, seen the result of that in full beam and it’s kind of shocking when it does come into view like that."

Many protestors whom Swaine has spoken with over the past five days describe the scene as an “urban war zone.”

The police are carrying equipment reminiscent of what the military would use in Iraq and Afghanistan. “There are stun grenades, there’s tear gas grenades. They’re carrying assault rifles, they’re driving these huge armored trucks atop of which police officers with sniper rifles and night-vision goggles are perched with their guns trained on protestors,” Swaine says.

Yet the show of force is not deterring the protesters. “The thing they keep stressing is that this is not sending them back to their houses — this is angering them and getting them back out in the streets,” Swaine says.

It turns out that some of the gear was, in fact, once in the hands of soldiers. G.W. Schultz, the homeland security reporter for the Center for Investigative Reporting, says there are two avenues local law enforcement agencies can use to get military equipment.

The first is the "1033 program" operated by the Department of Defense. Schultz says it enables local and state police to obtain surplus military equipment, but not all of it is weaponry or heavy equipment. The program also covers items like canteens, radios and protective gear.

The second way is through the Department of Homeland Security. Schultz says that, after September 11, Congress flooded state and local governments with federal cash for anti-terrorism efforts. But while the psychological blow from September 11 was huge, terrorism events are rare. “So a lot of communities had a difficult time figuring out how to spend that money,” Schultz says.

As Schultz puts it, money is everything: If Washington dangles billions of dollars in funding for a purpose like counterterrorism, communities often find a reason to get that money. Schultz says communities found threats that arguably didn’t exist prior to September 11. "So suddenly we had a whole lot of money to spend on an issue that, to this day — well over a decade after 9/11 — we’re still struggling to define.”

So what does it do to the public perception of law enforcement when local police look and act like a military force?

Schultz says the police are less focused on public perception than on protecting their officers. But it’s hard to see the images coming from Ferguson and not question what exactly denotes protective gear. When picking out the photo for this story, The World had to double-check to make sure it was from Ferguson and not from eastern Ukraine or Iraq.

“If you’re head to toe in lots of very thick protective gear, you can radiate an image of being in a war zone in a country that’s very unsettled by that," Schultz points out. "And that’s a problem.”

It's potentially a huge problem for Americans, since the images aren't coming from some foreign land, but the place they call home.