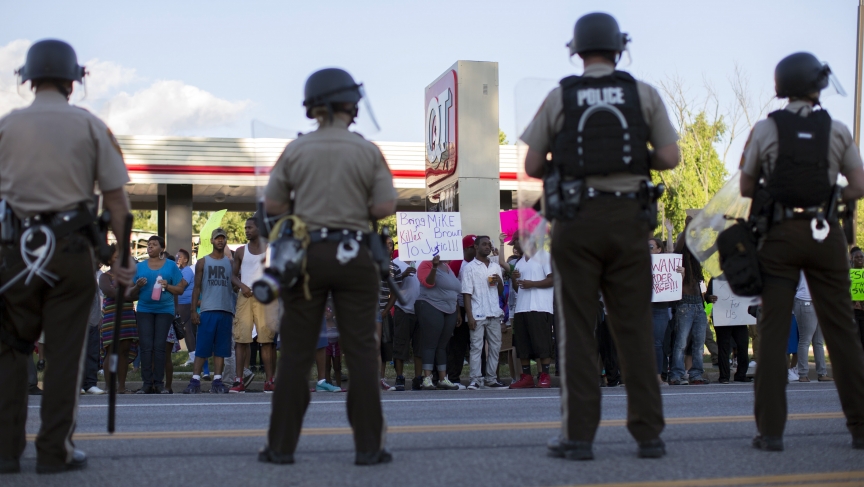 Demonstrators took to the streets in Ferguson, Missouri, again Tuesday, where community members are looking for answers in the death of Michael Brown, an unarmed 18-year-old teen killed by a police officer over the weekend, allegedly after a struggle.

Ferguson is a suburb of St. Louis and home to about 21,000 people, nearly 70 percent of whom are black. The town is part of a quilt of diversity and racial and economic disparities that have been the source of tension for decades.

On the heels of Brown's death this past Sunday, 12 business were damaged by rioters who broke windows, looted and set fire to a local convenience store. Police arrested 32 people in the incident, and two officers received minor injuries.

As the FBI and the Department of Justice's Civil Rights Division each open separate investigations into the fatal shooting, St. Louis County Police Chief John Belmar remains cautiously optimistic about the town.

"I have enough confidence in our community, I have lived here my whole life, that calmer heads will prevail moving forward, but I am planning for a worst case,” Chief Belmar said at a news conference this week.

But racial and economic divisions run deep in Ferguson. In 1917, East St. Louis erupted with some of the most serious racial violence in U.S. history after clashes broke out between African-American workers and whites who feared for their jobs and wage security.

The community was also the home of Dred Scott, a slave who unsuccessfully sued for his freedom and whose name is immortalized in the landmark Supreme Court decision declaring African Americans no citizens, and therefore having no standing to sue for their freedom in US courts.

Garrett Albert Duncan, an associate professor of African and African-American studies at Washington University in St. Louis, says there is a complicated history to the racial divisions in the community.

"A lot of what has gone on in St. Louis, as well as East St. Louis, is similar to what is happening in other northern cities," says Professor Duncan. "It goes way back to reconstruction, when the state began operating in support of white property ownership, and whites in general. We still see that going on, where the imperatives, especially for the white elite, are met and the African-American communities are actually excluded."

Professor Duncan says that St. Louis — a place he has lived in for 18 years — is very much divided along racial lines.

"This is not something that just happened," he says. "Part of what's going on, very specifically as it relates today, is the industrialization. If you go to north St. Louis, which is a code word for 'black,' you see all of these vacant buildings. There used to be a prosperous, predominately black community. But when our economy shifted and manufacturers left, you had vacant buildings, a loss of jobs, and the inability of black residents to go into the suburbs or predominately white communities to get jobs. There's always an economic twist to this."

According to Duncan, some people who attended the recent vigil over the weekend were from communities other than Ferguson.

"Some of the destructive behavior is actually from outside of Ferguson," he says. "You have folks coming in to exploit a situation that has nothing to do with Michael Brown. But everything is being conflated because no one knows who's who. In many ways, it's inflaming this notion of black criminality. But the fact of the matter is, if you watch carefully, those associated with the death of the young man are pleading for peace."

Duncan says that there is a history of tension between law enforcement officials and the community, adding that county and city police forces are reluctant to engage with citizens.

"Part of the political machines are involved in this as well — there's a refusal to meet people or to establish citizen review boards," he says. "That's not going to happen in my lifetime in St. Louis. There is this intense distrust because things to always go in a way opposite of the interests of the black community."

"There might be some superficial changes," he says. "I don't see any major movement going forward out of St. Louis. There are certain cursory, certain short-term solutions, but I do not see any long-term solutions."