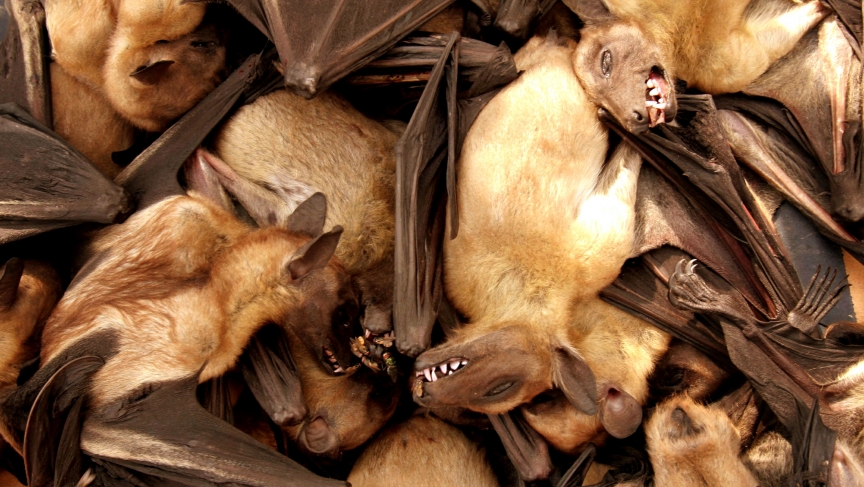 Fruit bats are seen for sale at a food market in Brazzaville, Republic of Congo.
Credit:

Scientists are warning West African communities where the Ebola virus has been aggressive to stay away from fruit bats, and to be wary of hunting bush meat, in general, too.

West African communities not only come in contact with the bats, but they prepare them in soups and other dishes. As the name suggests, the fruit bats only eats fruit and live in densely forested areas.

The disease, which has now claimed more than 1,000 lives and has been called the deadliest Ebola outbreak in history by the World Health Organization, has prompted the use of experimental drugs and vaccines. The disease erupted in Guinea and has since spread to Liberia and Sierra Leone.

The medical community is desperate to slow down the rate at which the disease is being contracted and is hoping getting people to stay away from fruit bats, in particular, and bush meat in general, will help.

Dr. DeeAnn Reeder, a professor of biology at Bucknell University, says bush meat hunting has happened in these communities for thousands of years.

“It’s a common cultural practice,” Reeder says. “It’s a good source of meat. The risk always in bush meat hunting of fruit bats or other animals is to the hunter or to the butcher. ... Whoever is basically preparing the carcass to eat is exposing themselves to blood and tissues and saliva and maybe even has sustained a bite. It’s not so much the meat after it’s been cooked — we don’t think that that’s a problem — but it’s that initial human contact where the risk occurs.”

The problem is that the culture of bush meat hunting is so ingrained in the community that it would be difficult to convince residents to stop altogether. “There’s so much infrastructure that needs to be put in place in order to provide alternatives to bush meat hunting,” Reeder says. “People are hungry. And my experience, at least, in South Sudan is that they really like the taste of bush meat. It’s something that they’ve lived with for a very, very long time.”

Reeder says cutting back fruit bat habitat can make it easier for viruses to spread. “By doing these sorts of deforestation events, we are increasing the contact rate of bats and people and that’s a worldwide issue in terms of emerging diseases.”

Bush meat hunting is a complex issue, says Reeder, and it has a long cultural and historical standing. But for now, slowing the consumption of the spicy fruit bat soup may help some ward off the deadly virus.

Dr. Reeder answered listener questions about the spread of the Ebola virus on August 13, which you can see in the comments below.