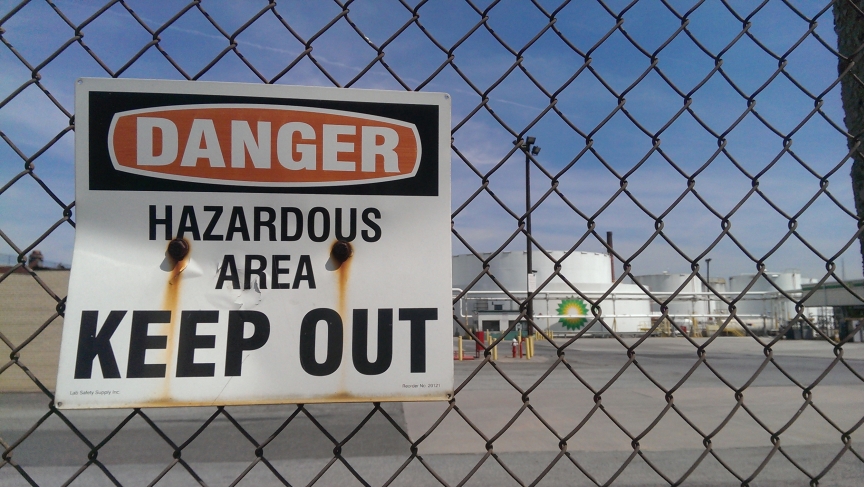 The BP Amoco yard in Greenpoint, Brooklyn is one of the stops during The Poison Cauldron tour. Refining ceased along Newtown Creek in the 1960s, and today the name of the game is petroleum distribution from fuel barge fed tank farms like this.
Credit:

It is a beautiful Saturday morning in July and I am standing at the top of a gentle rise on the border of Brooklyn and Queens, gazing down at the placid water below. Only I am not lying on a beach towel, curling my toes into the warm sand. In fact, I’ve been instructed to wear close-toed shoes.

“The bottom of the creek is covered in a 15- to 20-foot layer of a material we refer to as ‘Black Mayonnaise,’” explains our guide, Mitch Waxman. “It has the consistency of mayo, it smells of petroleum, and it’s a composite of 150 years of industrial waste, human excrement, petroleum residue and coal tar.”

You could call this “The Un-beach.”

For four years, Waxman has been leading a tour called The Poison Cauldron, showcasing one of New York City’s most toxic landmarks: Newtown Creek. It’s not some do-gooder thing, either — the crowd here today is mostly young and tattooed. They are fans of a form of fun-seeking somewhere between “urban exploration” and “dark tourism.”

Though Waxman offers a different name for it.

“There’s some who just come out for the pure old thrill of being able to say that they visited a Superfund site on the weekend ... the hip kids have started calling it ‘Superfun’ without the ‘d.’”

I prefer the term “anti-tourism,” for people like me who’d rather poke around an abandoned subway tunnel than take a selfie in front of the Eiffel Tower any day.

My tour mates let me know I’m not alone. Sam Poucher is visiting New York from Sydney, Australia, for the first time. He planned his entire, month-long vacation around excursions like this one with the help of Atlas Obscura, an organization that throws cocktail parties in graveyards and brings curiosity-seekers together in search of things like books bound in human skin.

“I think you can learn more about a city by learning about the dodgy history, the dirty stuff that the city doesn’t necessarily want you to know about,” he says. “I come from a pretty sort of glitzy, touristy city, and I’ve never really been interested in any of that. I don’t want to see the best part of the city that the city’s trying to push on the tourists.”

“If you flush a toilet anywhere below 79th Street in Manhattan, it comes to the sewer plant in Greenpoint,” Waxman says.

But maybe taking the subway to your local waste transfer station isn’t your idea of a vacation. For most people, summer means an exotic getaway to a foreign land. Then why not relax in a rogue nation with Young Pioneer Tours, a Beijing-based travel agency whose motto is “Group Tours for People Who Hate Group Tours.”

Who are these group tour haters, exactly?

“They’re the people that don’t want to do a two-week, fully-inclusive, cruise around the Med or something,” says Gareth Johnson, the founder of Young Pioneer Tours. “These are people who want to see real life. And a lot of them want to be able to judge a place for themselves. Two places, for example, where we go are North Korea and Iran. Two places that are absolutely vilified in the media. And people want to go there and see which bits are true and which bits aren’t.”

After two American tourists were detained in North Korea for leaving their bibles lying around, some may argue these places are a lot more dangerous than your local Superfund site. But Gareth disagrees:

“Every person that’s been arrested has been arrested with context — nobody’s been arbitrarily arrested. ... The main [thing] we say to people is, ‘You’re in somebody else’s country, respect the laws, respect the customs,’” he explains. “For example, we go and visit the statues and we’re required to bow. If people don’t want to bow, they’re allowed to wait on the bus and stuff like that, but it’s about not showing disrespect.”

Young Pioneer has taken respectful thrill-seekers to destinations as far-flung as Antarctica, Burma and the abandoned ghost cities of Inner Mongolia. They’ll even take you to places that don’t exist:

“There’s something like seven unrecognized countries in the world and most of them are based in the old Soviet Union. And we visit — at the moment — three of them. ... They’re basically frozen conflict zones. They have their own president, they have their own army, they have their own currency. But if you talk to 90 percent of the population, they don’t even know they exist.”

And Young Pioneers has big plans for the future. Recently, Gareth found a list of the 25 least-visited countries in the world.

“The bottom one is either Tuvalu or Nauru, I can’t remember,” he says. “And there’s nothing much going on there but it’ll be like, yeah, I’ve visited the least visited country in the world.

For now, I’m content to be an armchair traveller when it comes to Nauru — which mostly consists of a giant phosphate mine, by the way.  Besides, there’s still so much to see so close to home, as Waxman explains.

“And we are standing, right now, ground zero, on the second largest oil spill in the United States.”

Who needs the beach, right?