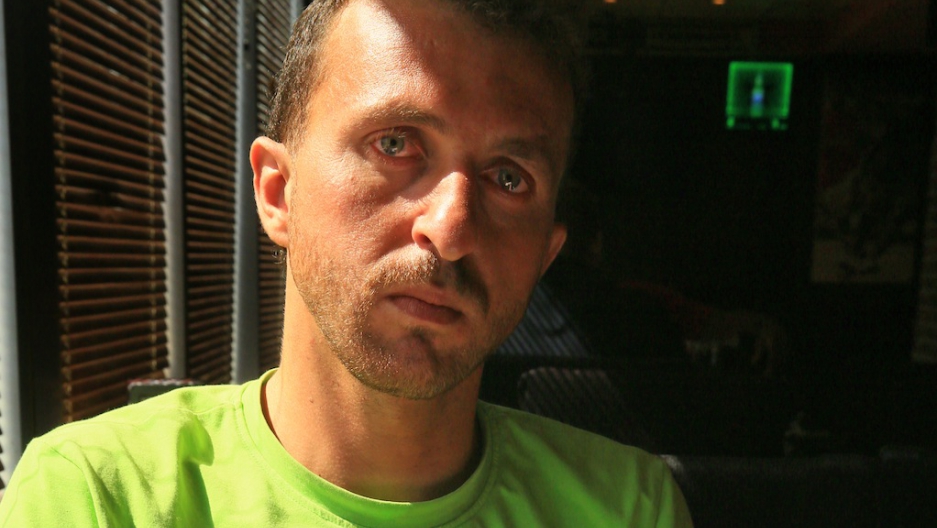 Assad Haig in Erbil. Sixty-three members of Haig's family in Sinjar were taken by IS militants a week ago.
Credit: Tracey Shelton
Share

ERBIL, Iraq — On Friday, Assad Haig received a call from his mother's phone number. On the other end was a militant of the Islamic State. Haig's family, the man said, were going to be executed.

Haig is 23 years old. He works in the Kurdish capital of Erbil. He comes from Sinjar, a town that was overrun by Islamic State militants on Aug. 3. Almost every relative he has ever known — 63 in total — was in Islamic State custody at the time he got the call. Most of them are, or were, women and small children.

Just a week before, Haig's dozens of relatives in Sinjar were still free. “My mother called and said IS were coming into the city,” Haig recalled of that morning. He struggled to hold back tears as he clasped his hands together in an attempt to keep them from shaking. “I begged them to leave everything and just run, but it was hard with so many kids. My little sister Rama, she is just three, and Iyhab is only five.”

Haig tried to call his mother back repeatedly. When someone finally answered it was a male voice on the line.

“We took them all. They belong to us now,” the man said before the line went dead.

All but Haig's father, who escaped to the Sinjar Mountains, and his grandmother, who is 84 and can't walk. IS left her alone in the family home but threatened to return and shoot her if she didn't leave Sinjar. She has no way of leaving the home on her own.

Most residents of Sinjar, like Haig, are Yazidi, an Iraqi minority group estimated to number 600,000. The ancient Yazidi religion is shrouded in mystery, and a misunderstanding of Yazidi beliefs has led to many labeling them “devil worshipers,” resulting in centuries of mass persecution.

Details of the Islamic State takeover of Sinjar just over a week ago are still sketchy. Those who escaped said captives were given two options: convert to Islam, or die. Others reported mass executions of men, while women and children were taken prisoner.

On Sunday, Iraq's human rights minister Mohammed Shia al-Sudani told Reuters he had evidence that at least 500 Yazidis had been executed by IS, among them women and children. Some had been buried alive.

IS media posted photos of some of the executions online. Several images showed around 20 men said to have been killed in Sinjar, with a quote from the Koran saying, “Slay them where you catch them.”

Kamil Amin, the spokesman for Iraq's Human Rights Ministry, said that many Yazidi women under 35 had been captured and were being held in Mosul.

"We think that the terrorists by now consider them slaves and they have vicious plans for them," Amin told the Associated Press.

Many fear that IS militants are following ancient battle customs practiced by the Prophet Mohammed and his men.

In stories about conquering villages of people considered "infidels" or "apostates," both the Koran and the Old Testament of the Bible speak of killing the men and taking the women and children for sale as slaves. The practice of having sex with female slaves is mentioned several times in the Koran.

“Blessed are the believers who restrain their carnal desires except with their wives and slave girls, for these are lawful to them,” reads one verse of the Koran.

"Prophet, we have made lawful to you the wives whom you have granted dowries and the slave girls whom God has given you as booty."

Accounts from witnesses so far suggest IS tactics against the Yazidi population are mimicking such practices, but the militant group hasn't yet released official statements about their intentions.

Haig prepared documents listing every one of his missing relatives — their names, ages, and phone numbers — to submit to the Kurdish police and US authorities. His grandmother helped him complete the list by phone from Sinjar. As he read through the papers on Friday, he was overcome with grief when he reached the names of his mother and sisters.

“Some people say they have been raping the women, maybe 6 or 10 men with one woman,” he said, staring vacantly out the window, in tears. “Some say they have even forced FGM [female genital mutilation] on them.”

Assad Haig holds documents that list the names and ages of his missing relatives. (Tracey Shelton/GlobalPost)

On Friday, as Haig was en route to the US Consulate in Erbil to yet again beg for help, he received a call from a man claiming to be an IS member. The man informed him that his family had been collectively sentenced to death for refusing to convert to Islam.

“They will be executed tomorrow,” the man told Haig.

Haig’s father was the only one who escaped IS capture. He fled to the Sinjar Mountains above the city where he remains trapped with thousands of others. An estimated 50,000 people were stranded there for the past week, with no supplies, no food, and no shelter, slowly dying from starvation and thirst. Reports on Sunday said that about 20,000 had managed to escape the mountains after US bombings of IS targets helped cleared the way.

In a report released on Aug. 8, UNICEF said at least 25,000 children were among those trapped in the mountains, and 40 were already confirmed dead from starvation or dehydration. The real number of dead is assumed to be much higher, the report said.

The US has been conducting humanitarian drops of food and water and launching targeted strikes against militants near Sinjar and Erbil since late last week. Iraq and Turkey were also reportly making aid drops beginning Wednesday. But on Friday, Haig said nothing had yet reached the desperate, besieged families he's in contact with. The mountain range spans 60 miles, and air drops of large containers can only be so precise.

“Every time I see on the television they have air dropped supplies I call my father and he says, no. There are no helicopters, no food, no soldiers,” Haig said. Haig's father turns on his phone every day to check in, then off to conserve the battery.

Some reports said the first US drops of food and water exploded on impact, but Defense Secretary Chuck Hagel said Friday that 80 percent of US air drops had reached their targets.

Relief supplies continued to be delivered by air throughout the weekend, with the US reporting a total delivery of 36,224 ready–to-eat meals and 6,822 gallons of water. At time of writing, British aircraft were also en route to deliver supplies.

For Haig, the wait and the uncertainty are unbearable. He's filed reports with both the Kurdish military and the US seeking help to find his family. On Thursday he attempted to drive to Sinjar himself, but was turned back by Kurdish forces.

“It’s all lies! No one is fighting the IS. No one is helping to get my family back,” he said. “Give me a weapon and I will go to fight. Give the weapons to all the Yazidi men. Just give us a chance to fight for our families or die trying. That’s all I ask.”