A water merchant in Nairobi sells to the city's poor.
Credit:

Every spare nook in Caren Gekonge’s home in Kibera is filled with bright yellow jerry cans and large black drums of water. She hauls all this water home in a wheelbarrow, making sure to stock extra. There’s often water shortages here. “What I have can take me for two weeks,” she says.

The city of Nairobi does not provide running water to people squatting in the slums, so they rely on what’s known as the water cartel.   The cartel sells water at around 6 cents for a 20 liter jerry can -- much more than wealthy Nairobians pay who have running water. These poor slum dwellers often spend around 20 percent of their budget on clean water.  “It was very expensive buying from there,” says Caren.

Caren would eventually develop a model that would get around having to buy dirty water. But before then, she would buy water from a water merchant like Paul. He didn’t want his last name used.  He says as far as Kibera occupations go, it’s not bad. “It’s an income earning business,” he says.

It’s basically pure profit. The business is based on stealing water by tapping into city lines. I asked if he worries about the police catching him, and he just laughed.

He does not worry.  The police rarely bother with serious crime in Kibera, much less the illegal water business that people rely on to survive.

But there is intense competition for business. The water merchants are constantly sabotaging each other.  Paul tells me his lines are cut almost every week by competitors. You can see the results of these water wars. The lines running along the sewers have been repeatedly patched together. 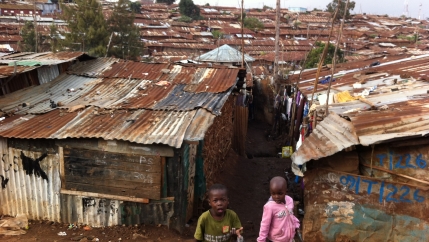 Walk along Kibera’s lively avenues, and the first thing that hits you is the smell. Because there’s no sewage system here either, Kibera residents often resort to defecating in plastic bags and throwing them in the street. They call them “flying toilets.”  For Caren and other Kibera mothers, the lack of a water infrastructure has been a hazard.

"For drinking we must boil it," she says, "because we now it's contaminated with all this dirt, the flying toilets.  If you give children like that they start diarrhea-ing."

So, Caren and other women began to look for an alternative.  They weren’t alone.

Vicky Mayo works for the Nairobi Water Utility. Until recently, the utility did virtually nothing to provide water for the poor.  For one thing, the slum is illegal and the government doesn’t want to encourage more squatters. “So many people did not see why they should work in the slums?” she says.

But a new constitution passed in 2010 makes water access a universal right. “So of course the company had to go back to the drawing board to figure out how can we serve these people?” she says. “We can no longer wish them away.”

But in some ways, the utility’s hands are tied. You would have to evict half of Kibera to build the necessary infrastructure.  So, for now, the utility must partner with Kibera residents.

Four years ago, the utility connected with Caren Gekonge and a group of a dozen independent business owners known as the ‘Wise Women”.

The Wise Women is a microfinance cooperative. And they got together to figure out how to build water and bathroom facilities in Kibera.

"So we decided if we get this," says Caren, "It will help us financially and will help the community to have a hygenic place to do their cleanness, their hygenic ways."

The Wise Women got funding for the construction through an NGO called the Kenya Water for Health Organization. The Nairobi Water utility provided the pipes and the water meter.  The group now gets free water for their families, and also earn money from the fees that others pay to use the facility.  Caren proudly shows me the small cement complex where they provide clean water and pit toilets. It has a whirring pump that brings water to a catchment tank on the roof. “They come, they shower, they use the toilets, they even take the water home from here,” she says. “We know it’s clean water, it’s never contaminated.”

That’s because no one can vandalize their pipes. The Nairobi Water utility installed a metal pipe deep underground.  And Caren is doing well for herself. She’s moved to the nicest neighborhood in Kibera. Back at her cozy cement home, she shows me what is by Kibera standards the ultimate luxury item -- although she has to fill the tank by hand. “And then I flush the toilet,” she says, proudly showing off the porcelain fixture. “And it’s done!”