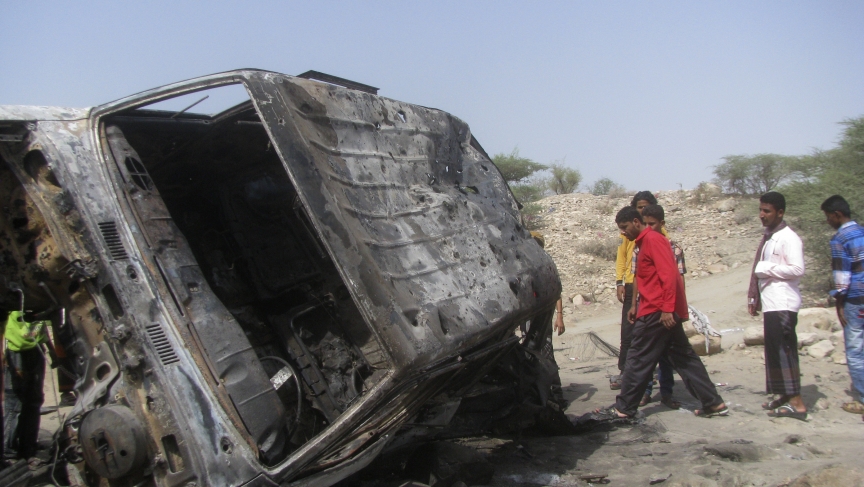 People gather at the site of a drone strike on the road between Yafe and Radfan districts of the southern Yemeni province of Lahj on August 11, 2013.
Credit:

December 12, 2013, began on a happy note for members of two Yemeni tribes as they celebrated the union of a young couple. After the wedding, a convoy of men took off to escort the bride to her new home. Twelve of them never made it.

The men were killed in an American drone strike targeting a man named Shawqi Ali Ahmad al-Badani. He was a young Yemeni who the United States believed was part of a plan to attack the US embassy in Sana'a, the Yemeni capital.

The US government says that the 12 men killed by the strike were militants. But Gregory Johnsen, a national security reporting fellow at BuzzFeed, talked to people on the ground who said none of them were. The Yemeni government also says that the men were civilians.

Johnsen says that Mohmmad al-Tuhayf, a sheikh from another tribe, became the mediator between the victim's families and the Yemeni government after the strike. He soon realized that the victims were civilians and a settlement was necessary.

"Essentially, they have this very long, drawn out negotiating session in which the central question is basically what is the value of a human life?" Johnsen says.

In many cases, Johnsen says, the men who were killed were breadwinners for large families. Those they left behind were now in need of help. Johnsen discovered that the families were paid about $800,000 in total and given 105 rifles as well.

What is not clear is where the compensation money came from. Johnsen points out that the Yemeni government has recently been in financial trouble and is unable to make payroll for public workers. That means it's possible that the money came from the United States, which would be odd given the American stance on the men's activities.

"The US says the people who were killed were militants. If the US is right, then someone gave the families of these militants money and rifles," Johnsen says.

There's no concrete evidence, Johnsen says, but his discussions with people on the ground and Yemeni government officials point to American money being used.

Overall, he says, these kinds of attacks by the US haven't helped the fight against al-Qaeda in the Arabian Peninsula, as the group's local branch is known. "I think what's happening in Yemen is that the US is sowing very bad seeds in an incredibly radical environment," Johnsen argues. "Instead of al-Qaeda getting weaker, it's getting much bigger."