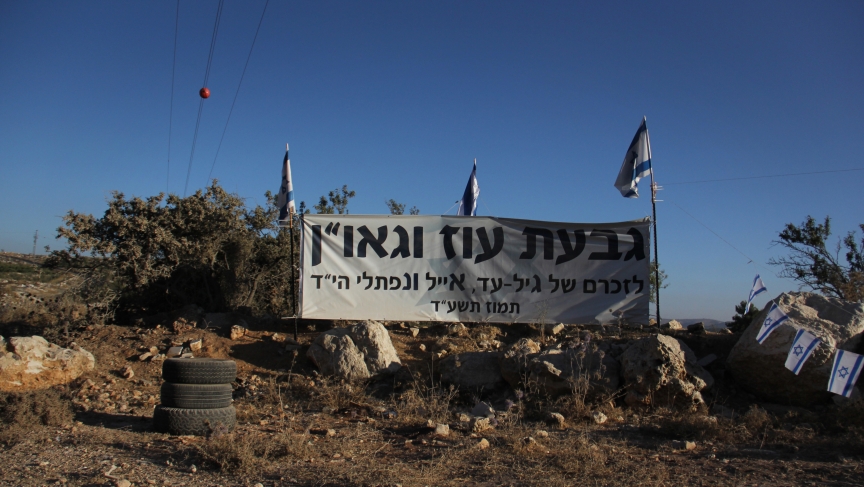 A sign stands at the entrance to Giv’at Oz veGa’on, a new outpost established by Israeli settlers in the West Bank in the name of three teenagers killed in June.
Credit:

On a rocky hilltop in the West Bank, a few dozen Israeli settlers gather around wooden picnic tables. They’ve pitched tents on the hilltop among the trees, some draped in Israeli flags.

“We are here on this hill in the heart of Judea, a few hundred meters [from] the hitchhiking place where our three boys were kidnapped by Arab terrorists a month and a half ago,” says Nadia Matar, co-chair of Women in Green. “They were found dead, murdered.”

She’s referring to Gilad Shaar, Eyal Yifrah and Naftali Fraenkel, the three teenage settlers who were abducted and killed in June. Women in Green is one of several Jewish settler organizations setting up Giv’at Oz veGa’on, which in Hebrew is an acronym for the names of the three boys. It’s a new outpost started in their memory.

More than 1800 Palestinians and 69 Israelis have been killed in more than four weeks of fighting in the Gaza Strip, but this conflict actually started in the West Bank. The three Israeli teenagers were found dead in the village of Halhul, just north of Hebron.

“The day we were told the boys were found, we came here to this hill,” Matar says.

But what Matar calls a hill in the heart of Judea, the biblical name for the area south of Jerusalem, is in the heart of the Palestinian West Bank. This area is part of the land promised for a Palestinian state under the Oslo peace accords. Since the signing of these accords 20 years ago, more than 300,000 Jewish settlers have moved into the West Bank.

Many of the settlers who live here are guided by the belief that God promised them this land. They are now protected by the Israeli army.

It was Defense Minister Moshe Ya'alon and Prime Minister Benjamin Netanyahu who proposed a new settlement here in response to the murder of the three teenagers. That plan would run counter to commitments the Israeli government has made to the US government over the years; new settlements are considered a violation of international law.

Right now, these tents are temporary, but the hope for many here is that this will become a permanent settlement in the West Bank. Young men shovel gravel and pour cement to form walkways on the hilltop.

Nearby, five caravans claim another hilltop at Tekoa Heh, also established in the name of the teenagers.

Nadia Matar says Giv’at Oz veGa’on has received donations from all over the world. She won’t say from where but many of the people staking a claim here have American accents. Romi Sussman, who moved from Los Angeles to a West Bank settlement 10 years ago, lives nearby. She’s here to help.

“It’s a good way for my kids to turn around the terror they felt when the three boys were taken and murdered,” Sussman says. “To do positive, like they are doing something for the land.”

When the teenagers were abducted, the Israeli government was quick to say Hamas was behind the attack, but Hamas denies this. A day after the Israeli teenagers were buried, a 16-year-old Palestinian named Mohammed Abu Khdeir was kidnapped, beaten and burnt alive in East Jerusalem, apparently in retaliation. Sussman and others here say they don’t condone the murder of Mohammed Abu Khdeir, but they do support the operation in Gaza, which has killed so many civilians.

But while Wells and others here say that building this outpost is a peaceful response to violence, as the Israeli settlements expand, cutting into Palestinian land, they continue to be a major obstacle to any peace talks.