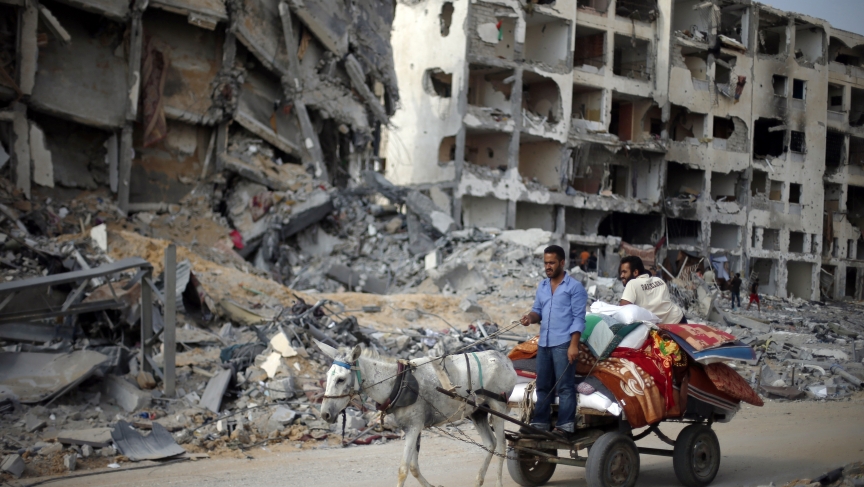 Palestinians ride a donkey cart past what's left of residential buildings as they return to Beit Lahiya in the northern Gaza Strip.
Credit:

Now that the war in Gaza is on a three-day pause, residents of the territory are returning to their homes. Many of them, says Azmi Keshawi, seem to be in a daze as they wander through flattened neighborhoods.

"It just breaks your heart to see those people," says Keshawi, a journalist who lives in Gaza City. "All their memories, all their dreams, all their future and past has been wiped away. They cannot afford to dream, even."

Keshawi has walked throughout Gaza during the 72-hour cease-fire. He met a family in the city of Beit Hanoun sifting through dirt and dust for the remains of their relatives.

"They told me a horrible thing," he remembers. "Two days ago they dug out three legs and one head. The rest of the eight bodies are under rubble and they're afraid the cease-fire might be over before they'll be able to dig out the rest of their loved ones."

Many other Gazans are simply sitting in front of their damaged houses, shocked at what has become of their neighborhoods. "The only thing left is sometimes the minaret of the mosque or schools which have no walls," he says. "The amount of damage for the infrastructure used by civilians is devastating."

The halt in the fighting is due to expire on Friday morning. Hundreds of miles away in Cairo, Egyptian mediators are continuing talks with Israelis and Palestinians. Egypt's intelligence chief has met separately with Israeli representatives and a Palestinian delegation. The hope is that these indirect talks will lead to a longer truce between Israel and Hamas. Meanwhile, Keshawi says, Gazans are waiting anxiously for the results.

"Last night and this morning my wife and my little daughter — especially the young ones — were worried. 'What's gonna happen? What's gonna happen?,'" he says. "The closer we get to the end of the cease-fire, you can see the fear on their eyes. They hope the cease-fire will be renewed and they don't have to go through the horrible experience again. "

Keshawi says if the cease-fire isn't renewed, his children won't leave the house Friday. And although he'd like to see a continued halt to the fighting, he still hopes Gaza residents will get something out of the negotiations.

"I don't want it to end like this," he says. His family is without electricity and clean water, and his children's schools have been damanged. "As a Palestinian, my hopes and my dreams are that the siege will be lifted, and my kids will be able to start dreaming again about a better future."