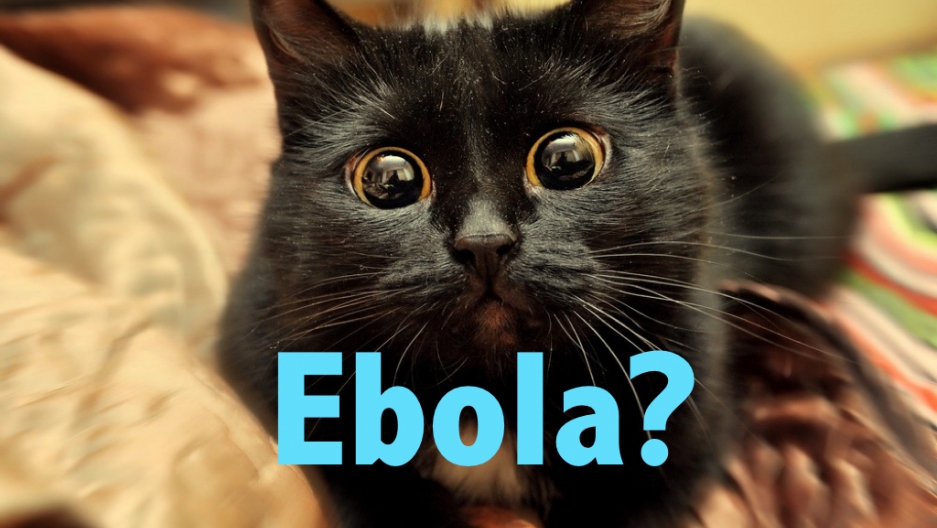 Okay, the cute animals are coming. But let's get serious for a moment.

People around the world are really confused about Ebola. It's true especially here in the United States, where politicians are saying incredibly uninformed things while television news outlets are doing everything in their flashy-graphic-making power to turn a devastating and tragic Ebola outbreak that's been going on in western Africa since March into a THREAT TO AMERICA today.

More from GlobalPost reporters: Should the experimental drugs that have been given to two Americans be sent to Liberia?

We're one small step away from seeing Anderson Cooper reporting live from the White House lawn wearing a Hazmat suit. Just look at this banner headline on Fox News: Are you kidding?! Within 48 hours of this broadcast, the patient in question tested negative for Ebola. Shocker.

If that's not enough, you've got an elected member of the US House of Representatives warning that unaccompanied minors arriving from Central America might be carrying Ebola.

"We need to know just from a public-health standpoint," said Rep. Todd Rokita, a Republican from Indiana, said, "with Ebola circulating and everything else." The US Office of Refugee Resettlement, responding to the entirely baseless concern, said that none of the more than 30,000 children who've arrived this year have Ebola. There are also no incidents — ever — of a person contracting Ebola in the Western Hemisphere. That's no incidents IN THE HISTORY OF EBOLA. Rokita said he still wasn't convinced.

Americans are freaking out because politicians and most of the media can't or won't explain simple facts about the disease, despite an abundance of simple, available tools for doing so. Like this infographic from the Centers for Disease Control.

To help everyone out, we turned to some adorable animals who are also having trouble understanding the basic facts of Ebola. Let's work through this together, shall we, in true internet fashion? All information comes from Ebola information pages at the Centers for Disease Control and Prevention and the World Health Organization. Answer: Good first question, polite raccoon. Ebola is a virus that causes a hemorrhagic fever disease. It has a high mortality rate. Between 50 and 90 percent of people who contract it die. Early symptoms resemble the flu. Death is caused by internal bleeding and organ failure. Q: That's horrible. :(  Why does Africa they have Ebola so bad? A: Yes it is horrible. The outbreak in West Africa is so bad because of a variety of interrelated problems having to do with sanitation, healthcare infrastructure, social services, political and financial stability, and public health education. A: You can only get Ebola through direct contact with an infected person or with the body of a person who has died from the disease. The virus is only passed through blood and other bodily fluids. You can't get it from air, water, or food.

I think I have Ebola. A: You don't. Stop. You're making everything worse by acting this way. A: Because you are a pet dog who lives in the United States and the outbreak is confined to West Africa. There have been no cases of a person or dog contracting Ebola in the Western Hempisphere. Ever. In history.

Q: But isn't there Ebola in New York City and Atlanta? I heard that. Two Americans — an aid worker and a medical doctor — contracted Ebola in Liberia. They were brought back to Atlanta for treatment in the past few days. Their transportation was very high-tech and so is their present quarantine.

A person was recently being tested for Ebola in a New York City hospital after traveling from West Africa and experiencing flu-like symptoms. The New York City Health Department reassured everyone that it was "unlikely" the patient had Ebola. The patient tested negative for Ebola on Aug. 6.

Q: But what if? How many people did those people come into contact with??? And once it's taken over metropolitan areas what's stopping it from taking over the United States?! WHAT IF?!! Second of all, medical infrastructure in the United States is well prepared to deal with any isolated cases. If you live in the United States, you don't need to worry about Ebola. The Centers for Disease Control and Prevention — the federal agency in charge of public health — has tried every way possible to tell Americans that they are not at risk.

Q: Why am I only hearing about this now? A: Because the two American Ebola patients just got here. Our entertainment-oriented news media knows that a dramatic story about an imaginary Ebola threat in the United States will, unfortuntately, be more appealing to many American viewers than a story about a terrible outbreak in West Africa. The outbreak has being going since March.

But I was watching Fox News and CNN and they said... Q: Okay but let's just say hypothetically, how would I get it? A: First, you'd have to fly to Guinea, Sierra Leone, Liberia, or Nigeria. A: And then you'd have to come into direct contact with the blood or bodily fluids of an infected person or body. A: No, Ebola is not food-borne.

Q: Can I get it from water? A: No, Ebola is not water-borne.

Q: Is this guy giving me Ebola right now? A: No, Ebola is not transmitted through casual contact.

Q: This cat's breath smells. Is he giving me Ebola? A: No, Ebola is not air-borne.

Q: Does Tom Selleck have Ebola? A: If you live in the United States, you have no reason to be. Stop. A: If you live in the United States, you have no reason to be, so just get out of the minivan and go be a dog.