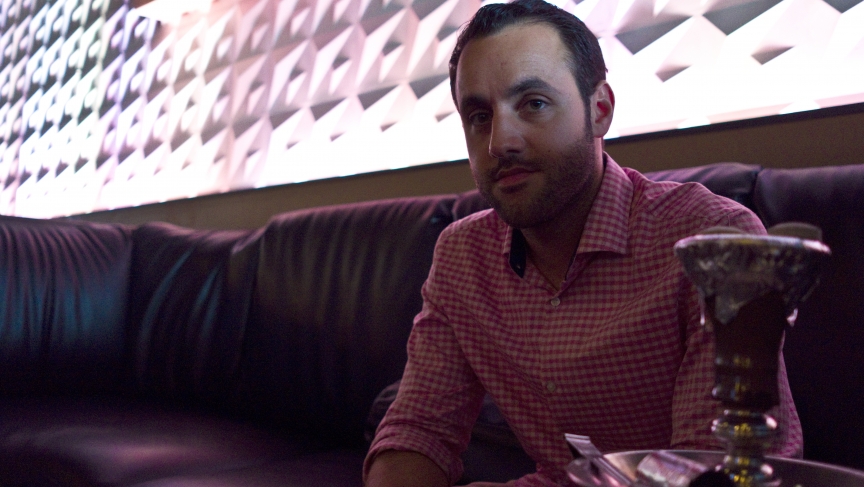 Iraqi-American rapper Tommy Hanna, aka TIMZ, is pictured at the Sheesha Lounge in Rancho San Diego, California. After a 2007 Iraq war protest video went viral, Hanna says he "wasn’t just a rapper anymore, it was like I was a spokesperson for these people. And I felt the responsibility of that.”
Credit:

Rapping under his stage alias TIMZ, he recorded an Iraq War protest song back in 2007. The lyrics are told through his Iraqi-American point of view on the conflict.

The song went viral. All of a sudden, Hanna was on Fox News, Al Jazeera and MTV, making his case against the war. All that at only 22 years old.

"From one website to the next, from one blog to the next, it was just like, I couldn't keep up with it," he says. "We reached corners of the world that I never — we never — thought that it would."

Hanna was born and raised in San Diego, but his parents hail from Baghdad. He says he hasn't been to Iraq since he was a kid — back when Saddam Hussein was still in power.

Though he covers heavier topics now, he started out rapping about girls, partying and the San Diego Chargers. After his Iraq War song, he says, that all changed.

"I kind of got into this position where I was like the de facto Iraqi-American voice, or face," Hanna explains. "I wasn't just a rapper anymore. It was like I was a spokesperson for these people, and I really felt the responsibility of that."

His next release in 2010 told the stories of Iraqi refugees struggling in the United States.

"Now he's a refugee / in the land of the free / but nobody's in the street / passing bread out to eat / and he can't find a job because no matter where he goes / they tell him sorry, jiddu, you're too old."

Hanna went on to law school and got an internship at a human rights organization. This summer, he was ready to put out a new album of songs about Iraqi-American life.

Then, in June, the Sunni extremist group ISIS seized control of parts of Iraq and declared a new war on Christians — like Hanna — and other religious minorities. Ethnic cleansing has driven hundreds of thousands from their homes. But, Hanna says, he felt wrong writing music about it.

"What's happening now is so tragic and so terrible, that I kind of felt like I should say something, I should do something. But at the same time, I didn't want to pop my head out and say, 'Oh hey, now I'm going to record a song and put it out,' because I didn't want it to be about me."

But he started getting messages. The first one came from a fellow young rapper — an Iraqi refugee in Michigan — asking him when and if he was going to write a song about the situation.

Hanna is not what you would call a famous musician. He recorded his first tracks in his bedroom closet, works a day job, and doesn't have a record deal. But he soon realized he had a platform.

"I feel like somebody needs to say something, and if I don't do it myself, then I won't be able to look myself in the mirror, because I have the opportunity to do it."

So he started writing. However, facing down deadly conflict with words and music isn't easy.

"I've been going back and forth for the past couple weeks, writing lyrics and scratching them out," he says. "I have this microphone in front of me and people are listening to me so I need to make sure that what I'm about to say is important."

The task presented many questions for Hanna: Should the lyrics call out George W. Bush? Or President Barack Obama for pulling out US troops? Prime Minister Nouri al-Maliki? And what kind of song do you write about terrorists like ISIS?

"What do you say to them? And what can you put in a song that would have any effect?"

He doesn't have an answer, he says — no one really does. He does, however, have the beginnings of a song he hopes to have out online by the end of August. He gave a preview of some of the lyrics:

"If I ruled the world there would be no God / no hell no heaven above just love. / The one commandment / it's not blasphemy if you understand it. / No religion, no Bibles / no prophets, and no idols. / Just us on this little blue ball / suspended in space tryin' not to fall."