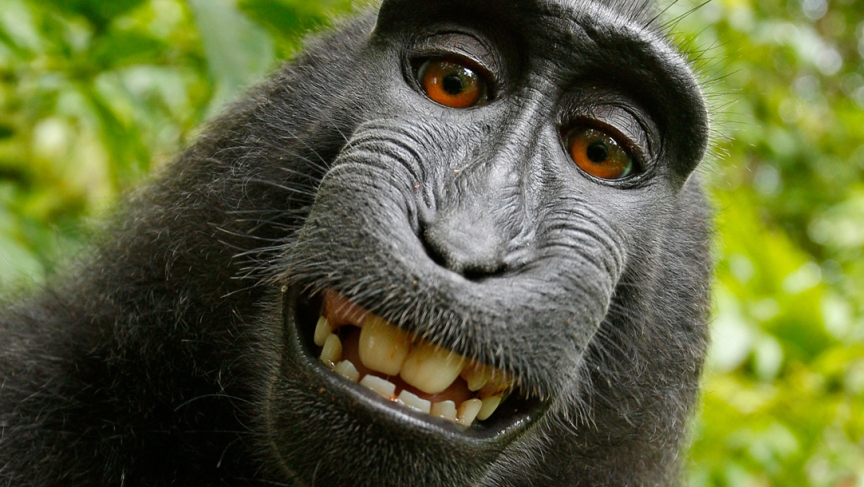 One of the photos of a crested black macaque monkey that David Slater says belongs to him. Wikipedia claims that, because the monkey pressed the shutter, the photo is a public domain image whose copyright belongs to no one.
Credit:

It's a whole new twist on The Shot Heard 'Round The World: A photo of a female crested black macaque monkey grinning for the camera in classic selfie pose. The photo is now an international sensation for the bizarre copyright battle it has sparked.

Here's how British photographer David Slater remembers the photography shoot back in 2011:

"I went to northern Sulawesi, Indonesia, and spent several days following a troop of crested black macaques around so much so that they became very happy in my presence, began to look interested in my camera. I became accepted as part of the troop, they touched me and groomed me ... so I thought they could take their own photograph. I set the camera up on a tripod, framed [the shot] up and got the exposure right ... and all you've got to do is give the monkey the button to press and, lo and behold, you got the picture."

The Macaque monkey selfie spread fast on the Internet and Slater sold it to a bunch of magazines. But the photo eventually found its way to Wikipedia. And much to the dismay of Slater, Wikipedia says it only publishes photos that are legally in the public domain.

Slater says Wikipedia has no right to publish his photo and that the site has cost him tens of thousands of dollars in lost earnings. He didn't technically take the picture, but he says the photo is still his property: "I had the vision of that, even though people say your vision isn't part of copyright. But I definitely did the sweat and tears of it, I learned about the camera, I've processed the image since, and why shouldn't it be my copyright?"

He's asked Wikipedia to take it down, but they say it's not actually Slater's photo. According to Wikipedia spokeswoman Katherine Maher, nobody owns the copyright.

"Because the monkey took the photo and the photographer — although it was his camera — didn't take that photo, there's nobody who copyright belongs to in this particular instance. It doesn't belong to the monkey, it doesn't belong to the photographer. And in cases like that, images and other works fall into the public domain. And so when something's in the public domain it can be used by anyone for any purposes."

So who's right? You can imagine law students going ape over this question. It can't be the monkey — US law says non-humans can't own the copyright. Even if you said that the monkey was something like an assistant, Slater says he'd still be in the right: " In legal terms, if I have an assistant who presses the shutter on my behalf, it's still copyrighted to myself."

Slater's pleas haven't worked so far "I haven't heard from Wikipedia. They don't care about facts, they are just punting their opinion around," he says. But he's not giving up the fight, which he sees as a battle for photographers as a whole. "It's a rights grab. And not just on my images but, I believe, on many other photographers' images."

A National Geographic photographer editor echoed Slater's opinions, saying that it happens all the time. Photographers publish their photos online and they're used all over the place with little or no regard for copyright. It happens so much that some photographers are apparently now reluctant to share their photos publicly because it can undermine their ability to make a living.

That's where things stand for now. As for the crested black macaque — also known as the Sulawesi crested macaque or the black ape — they might now be the most famous monkeys on the planet. And as a species threatened with extinction, that's probably not a bad thing.