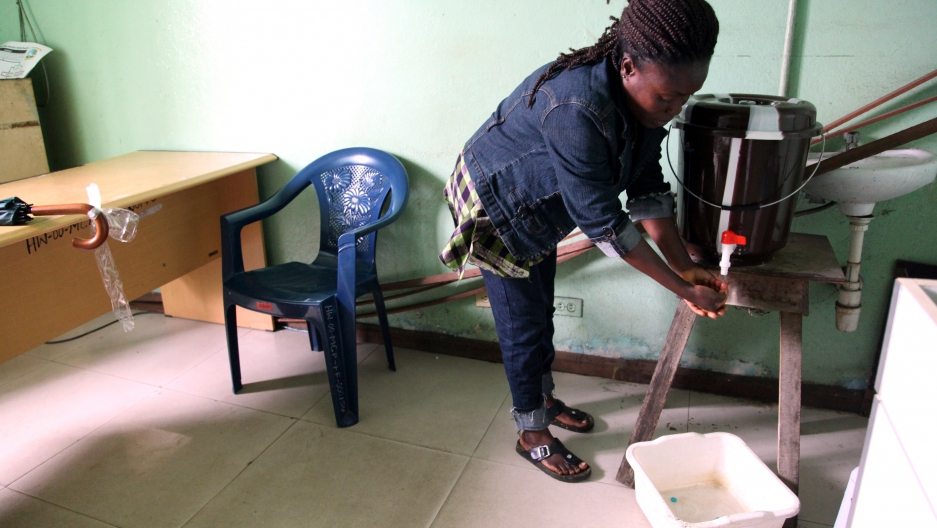 A woman washes her hands with chlorine water as a precaution against contracting Ebola in Monrovia, Liberia's capital.
Credit: Stringer
Share

NAIROBI, Kenya — Should untested, experimental drugs to combat Ebola be made widely available? This potentially life-and-death debate is raging as the disease continues to claim lives in West Africa, where the death toll has now reached 932, according to the World Health Organization.

Two American missionaries who contracted Ebola while working in Liberia have shown a marked improvement in the past week after being given an experimental drug called ZMapp that had up until then only been tested on monkeys.

This past weekend, Kent Brantly and Nancy Writebol were flown to the United States where they are receiving medical care at Emory University Hospital in Atlanta. Samaritan’s Purse, a Christian charity they were working with, said the two “had received a dose of experimental serum while still in Liberia.”

The news has sparked an ethical debate over equality of access to medical care and racism as two white Americans were given potentially life-saving treatment denied to hundreds of Africans.

Three eminent London-based professors argue that the seriousness of the current Ebola outbreak means there is a moral imperative to abandon normal stringent testing and get the experimental drugs to sufferers as quickly as possible.

“African governments should be allowed to make informed decisions about whether or not to use these products,” wrote Jeremy Farrar, director of the Wellcome Trust, David Heymann, head of the Chatham House Centre on Global Health Security, and Peter Piot, director of the London School of Hygiene and Tropical Medicine and one of the original discoverers of Ebola.

In their Wall Street Journal op-ed published Tuesday, the doctors hinted at an underlying racism, that African lives are worth less than Western ones. “It is highly likely that if Ebola were now spreading in Western countries, public-health authorities would give at-risk patients access to experimental drugs or vaccines,” they said.

J. Stephen Morrison, director of the Global Health Policy Center at the Center for Strategic and International Studies in Washington, agreed there is a debate about “racism, equity, wealth and Africa versus the West” but said there are parallel questions over “the ethics of rushing forward with experimental [drugs] that haven’t been put through any clinical trials and whose safety and efficacy are unknown.”

Others say the drug is as yet unproven, nor is there much of it around. “We cannot say right now that this drug is particularly promising,” said Dr. Anthony Fauci, director of the National Institute for Allergy and Infectious Diseases in Maryland.

"The animal data are very good and the use of it in the two patients is suggestive that it may have a favorable effect, but since there are only two patients I think you have to be careful about making any definitive decision,” said Fauci. He plans to start clinical testing of a potential Ebola vaccine in September, but says it is unlikely to be ready before the end of 2015.

The San Diego company that makes ZMapp, Mapp Biopharmaceuticals, said in a statement that its drug was only identified as a possible Ebola treatment in January this year “and has not yet been evaluated for safety in humans.”

It added that “very little of the drug is currently available,” meaning that even if the will were there the means are not.

After a lethargic initial international response to the Ebola outbreak, which began in Guinea in February, efforts to combat the spread of the virus are gathering pace.

Television trucks on Madison Avenue outside Mount Sinai Hospital Aug. 4 in New York after officials announced a male patient who recently traveled to West Africa is being tested for the ebola virus. (Stan Honda/AFP/Getty Images)

An emergency two-day summit is underway at the World Health Organization (WHO) in Geneva to decide whether to declare a global health emergency. Such a declaration could lead to travel bans and border closures.

Last week the WHO announced a $100 million response plan in the three most affected countries of Guinea, Liberia and Sierra Leone. The World Bank announced a further $200 million on Tuesday.

Meanwhile, the virus continues to spread, taking lives in West Africa and making inroads outside the region.

Nigeria’s health minister on Wednesday confirmed seven cases of Ebola in the capital Lagos, a megacity of perhaps 20 million people, with international flight connections across West Africa, Africa and the world.

Two of the victims have died. The first was US citizen Patrick Sawyer, who arrived in Nigeria by plane from Liberia last month, and the other a nurse who treated him.

Another man is being tested at Mount Sinai Hospital in New York City after returning from West Africa and complaining of fever and stomach aches. In Jeddah, Saudi Arabia, a man in his 40s was tested for Ebola, after returning from Sierra Leone. He died Wednesday, with it still unconfirmed whether or not he had contracted the virus.

But it is medical aid workers — who spend the most time in close proximity to Ebola victims — who run a very high risk of contracting the virus. Sheikh Umar Khan, the doctor leading Sierra Leone’s Ebola response, died of the virus in late July. Dozens of other health workers have also died, including foreigners.

Apart from the two Americans under treatment in Atlanta, three Spanish aid workers are due to be evacuated from Liberia after testing positive for Ebola.

On Tuesday British Airways suspended flights to and from Liberia and Sierra Leone “due to the deteriorating public health situation in both countries.” However, other airlines have not followed suit. Delta Air Lines continues to fly to Liberia, while African leaders Kenya Airways and Ethiopian Airlines are also maintaining normal schedules to the affected countries.

Airlines and health ministries in countries with flight connections to Guinea, Liberia and Sierra Leone are screening passengers on arrival, but the screening only works if a patient is already showing symptoms.

Ebola has an incubation period of up to 21 days, raising fears that people carrying the virus might travel widely before being identified.

“There is certainly a danger and a risk of a person who is infected getting on a plane, going undetected and landing in a US airport and being a threat,” Morrison said.

Western health authorities’ confidence in their capacity to prevent the spread of the virus domestically through quarantining and treating patients has done little to dampen the panic caused by even the mention of a disease that has an unparalleled capacity to instill fear.

Over the weekend, entrepreneur and TV personality Donald Trump exemplified the popular hysteria in a string of Twitter posts: “The US cannot allow EBOLA infected people back. People that go to far away places to help out are great-but must suffer the consequences!” he wrote, adding, “The US must immediately stop all flights from EBOLA infected countries or the plague will start and spread inside our ‘borders.’ Act fast!”