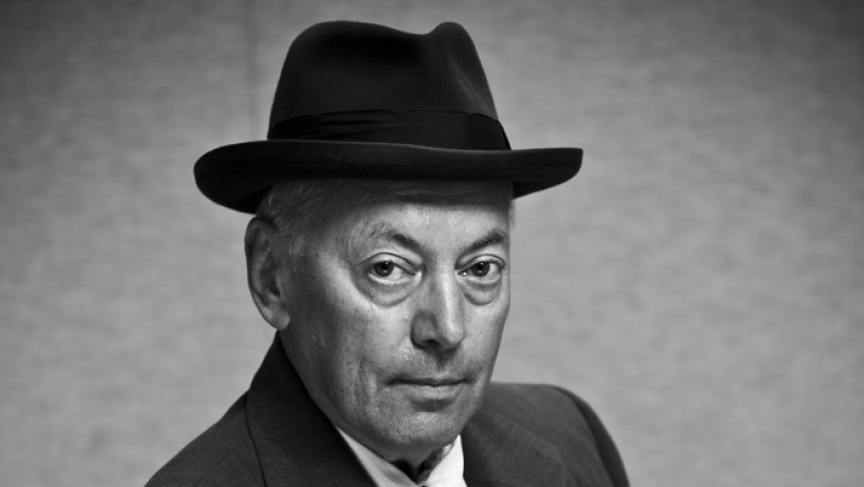 A film still of physicist Alexander Vilenkin from the set of "Dau". He was flown to Kharkov for a week to play the role of a scientist in the movie.
Credit:

In July of 2011, my dad, Alexander Vilenkin, called me. He said he was returning to Kharkov, Ukraine, the city my family left as political refugees almost 40 years ago, and he was leaving in two days. And that wasn’t even the weird part.

He was going back in time, to a country that no longer exists, to play a role in what might just be the grandest experiment in film history.

The film, Dau, is Ilya Khrzhanovsky’s epic biopic about the Nobel-prize winning Soviet physicist, Lev Landau. It may be the strangest, most ambitious movie you’ve never seen. It was filmed for five continuous years in a built-to-scale working model of a 1950s Soviet scientific institute.

“The scale of this whole project is totally mindboggling,” my dad says. “They closed the main street of Kharkov for two days, they closed the airport and they changed the signs from Ukrainian to Russian. They were shooting a scene where hungry people ate some cabbage, so they brought 70 tons of cabbage and they sprayed it with cement to make it look rotten.”

His friend and fellow physicist, Igor Klebanov, was also flown in from the US to play a role in the film. He had grown up in Kharkov as well, and, like my dad, this was his first time back. The set of Dau turned out to be less than a mile from his old home.

“It was kind of touching,” Igor says. “Just the fact that I knew the area and I could see our neighborhood from the windows of the studio, in some strange sense I was the local there and they weren’t. Because almost all the people at the studio were from Moscow or St. Petersburg, so there was this peculiar element of that.”

Except for the three lead roles, everyone who participated in the filming of Dau played their own doppelganger: Physicists played physicists, former Communist Party bosses played party bosses, and ex-KGB agents played — you guessed it.

“This was like nothing else that I saw before," my dad says. "Inside there was, like, a yard, and some KGB person would walk around the perimeter. And there was always music and it was always kind of threatening music, which kind of suggested some approaching catastrophe. Obviously all that was kind of intended to press on your psyche.”

It probably presses on your psyche even more if you were once blacklisted by the KGB, as my dad was. He spent years as persona non grata in his own hometown. Igor, on the other hand, left Kharkov as a teenager. For him, this was a walk on the dark side of Communism he never knew.

“When I went in, they took me to Pervi Otdel — basically the KGB — and they had me write out these long statements in Russian,” Igor says. “And that was quite an experience, having this guy, who is like the KGB guy, basically stare at you and dictate to you and then you’re supposed to repeat it and write it all out.”

“I had to do that, too,” my dad says. “And I remember that, you know, the meaning was that I will not tell any secrets under any circumstances.”

“That’s right, that’s right,” Igor says. “Maybe they’ll be after us soon.” They both laugh at that.

Then Igor adds, “The whole thing, I didn’t perceive it as a particularly Soviet. I mean, it was an allegory of Soviet life, but my immediate impression was that the Soviet life was far more bleak than what they created at this institute.”

Sadly, it doesn’t look like I’ll ever get the chance to see my dad navigating this weird parallel universe. Dau has been scheduled to premiere at Cannes for the past three years in a row, but remains stuck in post-production.

At least he brought home some souvenirs. “I understand it was the custom when a scientist visited the institute. When he left he was given some presents," Dad says. "I left most of them, but I took a roll of toilet paper, which was a very kind of nostalgic thing. It was a deficit when I lived in Kharkov, very hard to get. It still decorates my house.”

Now you know what you get when your dad goes back in time to the USSR — a roll of toilet paper. There’s got to be some symbolism there.