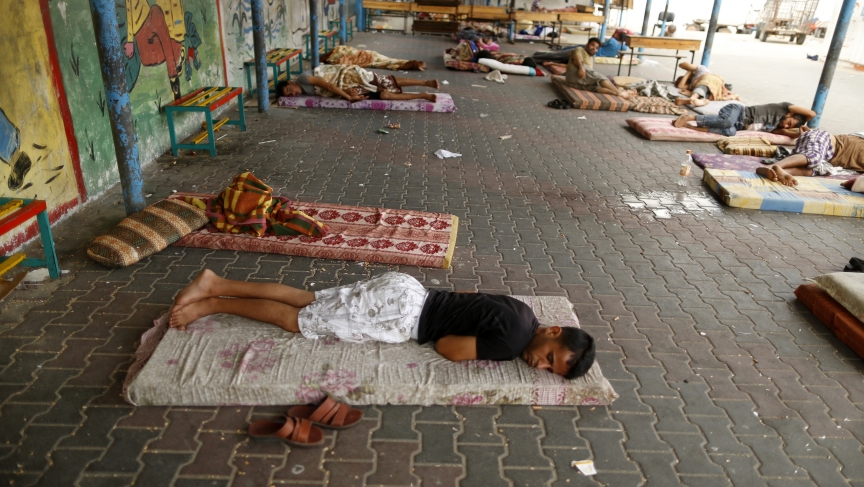 Palestinians, who fled their houses during an Israeli offensive, sleep at a United Nations-run school, sheltering displaced Palestinians, in Gaza City August 3, 2014.
Credit:

On Monday, Israel and Hamas agreed to a 72-hour cease-fire proposed by Egypt. With a long-term truce in mind, an Israeli delegation headed to Egypt Tuesday to begin indirect talks.

Meanwhile, Israeli ground forces have already begun to withdraw from the Gaza Strip. Palestinian negotiators have already been working in Cairo in recent days. The temporary respite comes after Friday's cease-fire collapsed amidst heavy fighting and an attack near a UN shelter in Gaza that killed 10.

Many such cease-fire promises have come and gone in the past month of fighting — fighting that has displaced more than a quarter of a million people, killed nearly 2,000 Palestinians and more than 60 Israelis, the vast majority of them soldiers.

What will Hamas and Israel talk about? Is this a negotiation about trading tunnels for peace?

Griff Witte, London Bureau Chief for the Washington Post, says during the 2012 conflict between the Israelis and Palestinians, Egypt played a key role in negotiating a cease-fire. But Egypt has changed quite a bit in the last two years.

"At that time, the Muslim Brotherhood was in power, this time around the military is in power in Egypt," says Witte. "There's a real lack of trust here, not only between Israel and Hamas, but there's also a real lack of trust between Hamas and Egypt. I think that's going to be an issue as these talks get underway."

Hamas is likely feeling the pressure during these negotiations, since Gaza has paid such a high price during the most recent onslaught of fighting.

"Gaza has been absolutely decimated by this conflict," Witte says. "Hamas really has to do something for its people now after all of the sacrifices that they've endured. Hamas is going to be under really severe pressure to show the people of Gaza that all of it was worth something. It's not clear that they're going to get anything out of this."

While the outcome of these negotiations remain unclear, Witte says Hamas is hopeful that a final deal will include open borders and a lifting of restrictions that allow for the free flow of people, goods and services.

"But Israel is going to surely drive a hard bargain in these negotiations — Israel feels like it can last longer than Hamas can," Witte says. "Hamas is going to be in a very, very difficult position."

Though Witte describes the suffering in Gaza as "enormous," he says Israel will not back down easily in negotiations.

"Israel feels that it has Hamas in a very strategically weak position," he adds. "It doesn't feel like it wants to give Hamas anything that could be construed as a reward for firing rockets."

During past conflicts, the Israeli people have questioned whether the violence was indeed worth it, says Witte. But that's not the sentiment many citizens have right now.

"There continues to be very strong support in Israel for this campaign, and a sense that the sacrifices, as great as they are, are worth it," he says. "I think the tunnels have really spooked a lot of Israelis. The Israeli military has said it destroyed 32 tunnels between Israel and Gaza over the course of this operation, and there was a real fear among Israelis that Hamas planned to use these tunnels to dig down under Israel and take Israelis captive. That's loomed very large in the Israeli imagination."

As Hamas and Israel come to the table, is there any real hope for a negotiated solution that could satisfy both parties? It's still too soon to tell, Witte says.

"The fear here is that this conflict will just endlessly repeat itself," he says. "We've now seen three iterations of this conflict — in 2008/2009, in 2012 and now 2014. Although, in each case, Israel feels like it has proved itself to be far, far superior militarily, the underlying reality here has not changed."

Witte says that the underlying reality in this conflict is that, despite Israel's reservations, Hamas remains very much in control in Gaza.

"[Hamas] has weapons, and Israel would like to demilitarize Gaza in exchange for some sort of opening in the territory," he says. "But Hamas is not interested in giving up its weapons — that's the source of its power; that's what gives it strength. If it begins to allow itself to be demilitarized, it would face problems in terms of maintaining its hold on Gaza."

Though this most recent conflict involves Gazans, Hamas and the Israelis, Witte says the Palestinian Authority is represented in these talks as well.

"I think there are moderate voices on both the Israeli and on the Palestinian side, saying this is an opportunity to use this conflict to give the PA more leverage, to give moderate Palestinian voices more of a say, more control in Gaza, and to limit Hamas's power there. How you get there is very unclear, and it's also unclear if that's ultimately what Israel wants," Witte says.