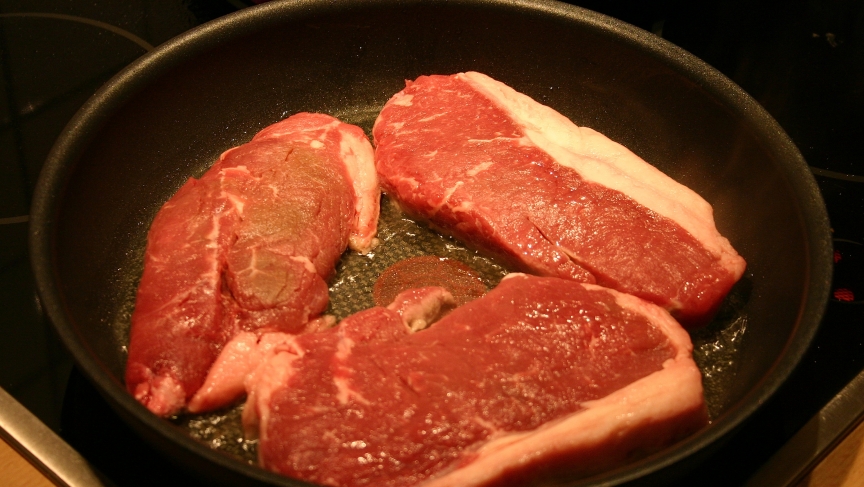 Steaks cooking in a skillet.
Credit:

If you're an environmentally conscious eater, a new study says you face a pretty stark choice when you look at the menu.

It's not even meat versus vegetables: “Basically, it is really beef versus everything else,” says Gideon Eshel, a research professor in environmental science and physics at Bard College who co-authored the study.

Eshel and his group set out to measure the costs of producing beef, poultry and eggs, and the results were staggering. Producing 1 mega-calorie of beef — or 1,000 calories — requires about 150 square meters of land. By comparison, eggs or poultry require about five square meters.

That's all big news because raising cattle is a big business in the US. According to the USDA, there are about 88 million head of cattle in the US — nearly one cow for every three people.

Beef is so resource-intensive primarily because of its biology, Eshel explains. Cows are "ruminants" — animals that have multiple stomachs that break down foods like grass and release their nutrients. “Rumination is a really magical and very evolutionarily clever trick,” Eshel says. “It opens up a whole world of sustenance that is entirely unavailable to mono-gastric animals like ourselves. But the price that they pay for that is staggering inefficiency.”

In other words, cows are the least efficient means of converting food energy into protein for human consumption.

Eshel grew up on a kibbutz in Israel, where livestock outnumbered people 10 to one. He says he loved being a kid on a kibbutz, growing up among cows.

“[But] when it comes to calculations, you check your beliefs and your faith at the door,” Eshel says. “They have no room in the calculation; the calculation is entirely blind to politics or faith. It’s just numbers — and you do the math as you know best.”

There is still much we don't know, Eshel says. He points out that the US has just about a quarter of the population of China. Throw in India, he says, and the US population is almost trivial.

“To know what’s going on in the [rest of the] world, where agricultural practices are dramatically different, would certainly be interesting. I’m working now with other people on how to figure climate change into this."