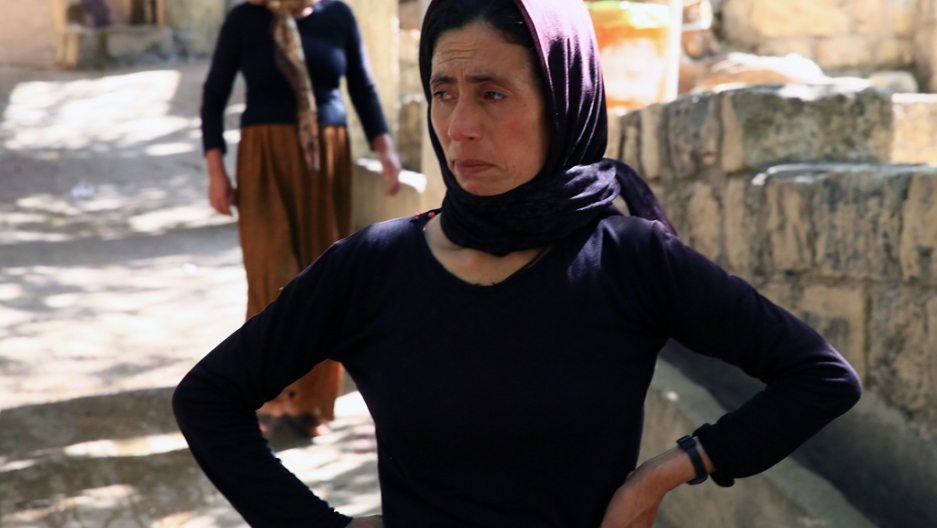 Just hours after Al Qaeda-inspired extremists, known as the Islamic State, invaded their hometown Sinjar in northern Iraq, a steady flow of newly displaced families poured into the holy city of Lalish.

Sinjar is a predominantly Yazidi town which had been under Kurdish control since the Iraqi army fled in June. The semi-autonomous Kurdish territory in Iraq now shares a border with the self-declared caliphate under Islamic State control.

Yazidis, who have been persecuted for centuries, adhere to a pre-Islamic faith linked to Zoroastrianism. Their religion is shrouded in mystery, but most Muslims consider them “devil worshippers.”

On Sunday, one man sat in the courtyard of a temple in Lalish, his face expressing anguish. He was unable to speak. The man next to him explained:

“They captured his whole family,” he said. “They made his wife and daughters cover their hair and faces. Then they made them renounce their religion and swear allegiance to Mohammed. After that, they killed them all.”

The man had been away from his home at the time of the attack. When he tried to return, he was informed of the executions by his companion who dragged him from the scene as thousands fled to the homes of relatives or to the temple, which is now sheltering thousands.

The United Nations says 200,000 civilians, most of them Yazidis, have fled Sinjar and warned of a burgeoning "humanitarian tragedy." While the majority of Sinjar’s population is Yazidi, there are also some Arabs and Assyrian families.

Yazidi families arrive at the Lalish temple, fleeing for their lives after IS seized the city of Sinjar. (Tracey Shelton via Instagram)

The Islamic State (IS) began shelling Sinjar and several surrounding villages in the early hours of Sunday. By midday they had entered the city. Many of the men from Sinjar stayed to fight, while locals say the Kurdish peshmerga forces, who had been protecting the city, fled.

An estimated 600,000 Yazidis remain in Iraq. Lalish, which houses the tomb of Sheikh Adi ibn Musafir, the main figure of the Yazidi faith, is normally a place of pilgrimage and worship. Today, it became a camp for internally displaced people.

While Kurdish media reported that peshmerga reinforcements were on their way, Islamic State members tweeted their victory over the towns of Zumar, Sinjar and Wana.

“IS will extend to Bashika, and Shahan — cities of the Satan worshippers — and Qaraqosh, Tul Kef in the next few hours God willing,” read one tweet shared with the hashtag #_ولاية_ نينوى.

The victories mark the second straight day of losses in the area for Kurdish forces, who had seized control in June after the Iraqi army fled.

“The IS attacked us by mortars and bombs,” said one woman in Lalish, who asked not to be named.

“When they entered the city they were covering their faces. They killed so many people. I saw the bodies. I saw so many people die …” she said, trailing off in tears.

Those arriving in Lalish said all the women and children who were able to fled.

“They are killing everyone,” said 16-year-old Evan. “The Sunnis are OK, but the Shia and Yazidis they are killing, even women and children.”

“Some families escaped to the Sinjar mountains, but they hit them with mortars. I think they are all dead now. I saw the explosions,” Evan said.

Arian, a young boy from the city of Bashika, said many of the families were fleeing his city fearing they may be next.

“My aunt was in Sinjar. They were coming here by car but the IS blew out their tires. I’ve been trying to call her back, but she is not answering her phone,” he said frantically.

Local media are so far reporting 100 deaths, including 30 executed in Sinjar city.

Anger over the abandonment by Kurdish forces was high.

“They told us they would send reinforcements,” said one man, himself a member of the peshamerga forces. “All the Kurds left and it was just us trying to fight. No one came. We had no choice but to run too.”

In the village of Asyan, fleeing families took shelter in the homes of friends and relatives.

A man who had served as the bodyguard of the head of the Iraqi police force in Mosul, before the IS takeover there, said most Yazidis had already fled the city due to almost annual mass killings of Yazidis carried out by Sunni extremists. Of the handful of families that remained, he said all managed to escape with their lives.

“When the IS came, we had to escape in secret,” he said, adding that personally they wanted him dead on two counts, for his religion and his work. “We left all our weapons, uniforms and vehicles behind so we looked like civilians. We know the back streets and managed to escape.”

The conversation was interrupted by a frantic Skype call — a sister living abroad, pleaded for the family to leave the entire district and flee to Erbil.

"In every home there are two or three families," said Dilshad Sluyman, a resident of Asyan who is also hosting Yazidis who fled Sinjar. "They all left everything behind, but the worst thing is not the killing but forcing us to become Muslim. This is worse than death."

Sluyman said many of those who fled said women were being forced to convert and then kidnapped by the IS. Man were executed directly.

“But this attack is not new for us. It has happened 72 times already," he said, referring to both modern and ancient history. The Yazidi community was almost wiped out by massacres at the hands of Ottoman Turks and Muslim Kurdish in the 19th century.

Yazidis protest in Erbil over the retreat of Kurdish peshmerga forces they say abandoned the city of Sinjar to Islamic State forces. (Tracey Shelton via Instagram)

In April, 2007, a bus carrying workers from a textile factory in Mosul was Hijacked. Muslims and Christians were released. The 23 remaining Yazidi passengers were executed. In August that same year, two trucks loaded with explosives almost wiped out two entire Yazidi villages killing more than 500.

The Yazidi faith, which predates Islam, is a closed religion. Converts are not accepted, and neither is intermarriage with other faiths. They revere the archangel Melek — who Muslims identify as Shaitan or Satan — who refused to bow down to God. But unlike the Satan of Christian and Muslim faiths, their Melek was not renounced by God and they believe evil exists only the hearts of wrongdoers, not in the form of a fallen angel.

As IS continues to push forward through the night, the Yazidi community is bracing for the worst.

"All people are sad for those killed and disturbed also because no one knows what will happen. We hear from many people they may be here in three or four hours. We are afraid they will destroy our temple," said Dilshad Sluyman.

“They believe that if they kill one of us it’s like an automatic visa to heaven.”