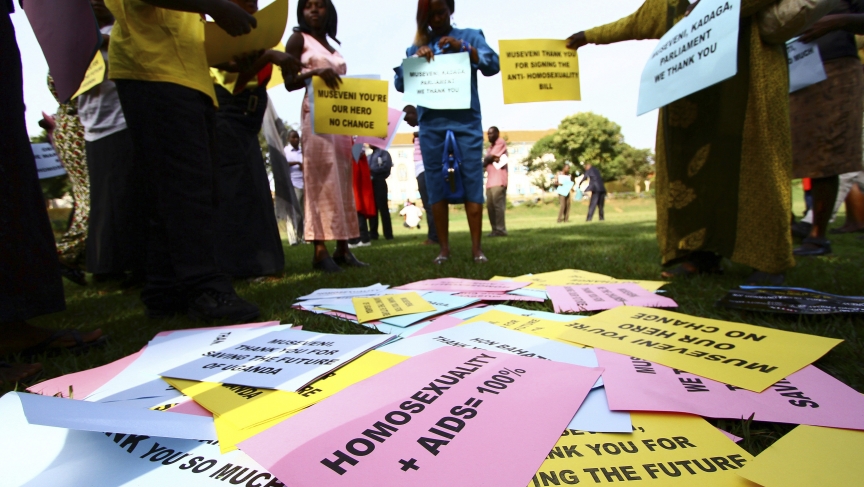 Supporters of the Anti-Homosexuality Act preparing for a procession in Uganda's capital, Kampala, in March 2014.
Credit:

Uganda’s Constitutional Court struck down the country’s Anti-Homosexuality Act on Friday, offering hope to Ugandan LGBT activists. But the law is not yet completely dead.

“[The Court] ruled on a very narrow basis,” says Lester Feder, a foreign correspondent for BuzzFeed. “What they found was that when Parliament held a vote on the bill on Dec. 20, there was no quorum present, which means there weren’t enough members in the room to be considered a valid vote.”

The tough anti-gay legislation was signed by Uganda’s President Yoweri Museveni in February. The law allowed for a life in prison for people charged with “aggravated homosexuality” or even simply “promotion of homosexuality.”

While the technical basis of the court’s ruling allows room for Uganda’s government to appeal, it’s still unclear whether the case will actually make it to the country’s Supreme Court. “The question of the appeal, I think, is open,” Feder says. “There is a possibility of an appeal here. There’s also the possibility that Parliament could simply vote on the bill again with a quorum."

But President Museveni may fight against that. The Anti-Homosexuality Act severely strained relations between Uganda and the West, and several countries — including the United States — either cut back or suspended aid to the east African nation after the law passed.

“What is clear is that when the law was passed initially," Feder said, "it was passed by surprise to the president and his officials. And if there’s a way for the president to put a stop to the bill without directly appearing to do so, he might find that an attractive option to preserve good international relationships he has remaining.”

Friday's court ruling was met with optimism from the Ugandan LGBT community. “LGBT people seem to be elated,” Feder says, “and what we can see on Twitter is the real feeling of a new beginning.”

But Feder says there’s still serious worry among many Ugandan activists: “I spoke to a couple of people who were in the Court right after the ruling, and the LGBT activists immediately went underground.”