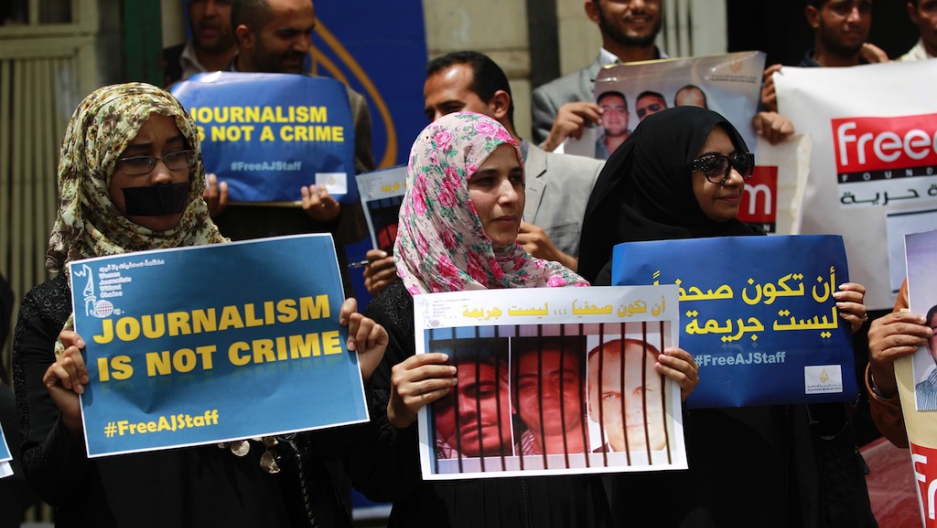 Yemenis, some of them being journalists, hold placards during a protest on June 25, 2014 in the capital Sanaa in solidarity with Al-Jazeera journalists (seen on the posters) jailed in Egypt.
Credit: MOHAMMED HUWAIS
Share

Eid — the end of Ramadan — has come and gone. Traditional pardons have been handed out. In Qatar, poet Mohammed al Ajami (Al-Dheeb), was not among them. He continues to live in a prison in the desert, serving a 15-year sentence for two poems, one praising the Arab Spring and the other critical of the Emir.

He and his poems “encouraged an attempt to overthrow the regime,” according to the charges.

The over 70 pardons granted in Qatar are reported to have gone to Asian workers charged with theft, rape, drug abuse, bribery, prostitution and more.

These workers will now likely be deported. If Mohammed al Ajami were released, he would also likely leave the country to reunite with his family and then perhaps accept a brief fellowship as a poet at a major university.

Throughout the Muslim world, Ramadan is a time when dispensations are handed out — as many as 1,000 prisoners were reportedly released in Saudi Arabia, 800 plus in Dubai, over 350 in Egypt — to individuals charged with violent and nonviolent crimes.

But the amnesties were not given to writers — not to poet al Ajami, not to Egyptian journalists or Iranian bloggers. The offense of words and ideas are perhaps judged more dangerous.

Writers in prison in the Middle East who did not get pardons include: three writers in Bahrain, five in Egypt, 35 in Iran, one writer in Qatar, two in Saudi Arabia, 11 in Syria, one in Tunisia, and two writers in United Arab Emirates.*