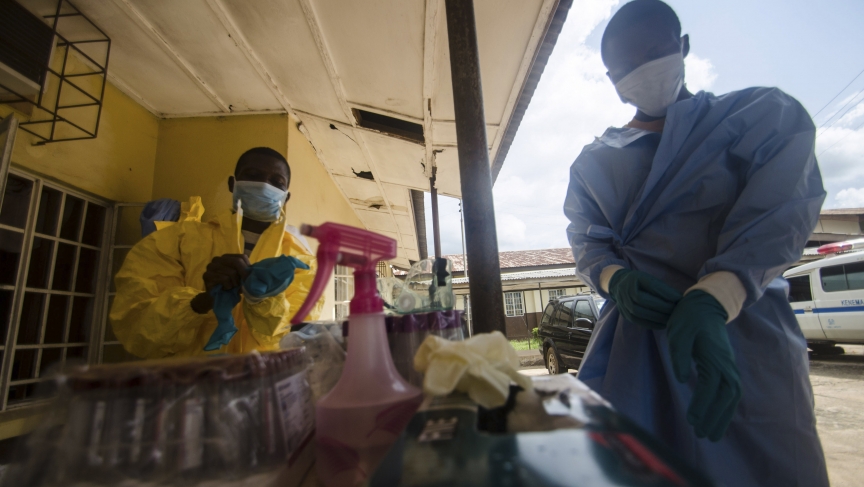 Medical staff put on protective gear in the Kenema government hospital before taking a sample from a suspected Ebola patient in Kenema, Sierra Leone.
Credit:

It was just a little more than a week ago when Liberian American Patrick Sawyer collapsed after arriving in Lagos, Nigeria, on a flight from Liberia. A short time later, he was dead — the first American victim of the Ebola outbreak in west Africa.

Sawyer was a naturalized citizen living in Minnesota, but he returned to his native Liberia for work. A father of three, had had intended to come back to Minneapolis in August to visit his daughters and his wife, Decontee Sawyer.

“He was so full of life," Decontee Sawyer says. "He was bigger than life. He would be in the room and you’ll know he’s there. He was a very passionate man."

That passion, according to his wife, is what brought him back to Liberia to work for the government. “He felt strongly about democracy and he wanted a better democracy for Liberia,” she says.

Before returning to work in Liberia, Sawyer was active in the Liberian community in Minnesota. The state has the largest Liberian immigrant community in the US, and there's where he met his wife. In the wake of his death, the community has rallied together to raise awareness and funds for Ebola-stricken areas in Liberia.

“I said it’s time we unite, it’s time we come together as one and do something together as one people to help people back in Liberia,” Decontee Sawyer says. She helped start a group, “Concerned Liberians Against Ebola,” that's raising funds for non-profits including Samaritan’s Purse and Global Health Ministeries. Both groups have been on the ground in Ebola-affected communities in Liberia.

Two healthcare workers with Samaritan’s Purse, both Americans, recently contracted the virus in the course of the work. The State Department announced on Friday that they would be medically evacuated to the United States for treatment at Emory University Hospital in Atlanta. No one knows for sure yet how Patrick Sawyer contracted the disease, though had been caring for his ill sister in the weeks before his death. She died after becoming infected with Ebola, and he might have contracted the virus from her.

For Decontee Sawyer, this current Ebola crisis harkens back to the terrors of the Liberian civil war during the 1990s.

“During the civil war, when I was here in the late 90s it was these phone calls — every day was a phone call from Liberia to say who died," she recalls. "Every day people were dying. Every day there was constant crying. And it’s taken me there."