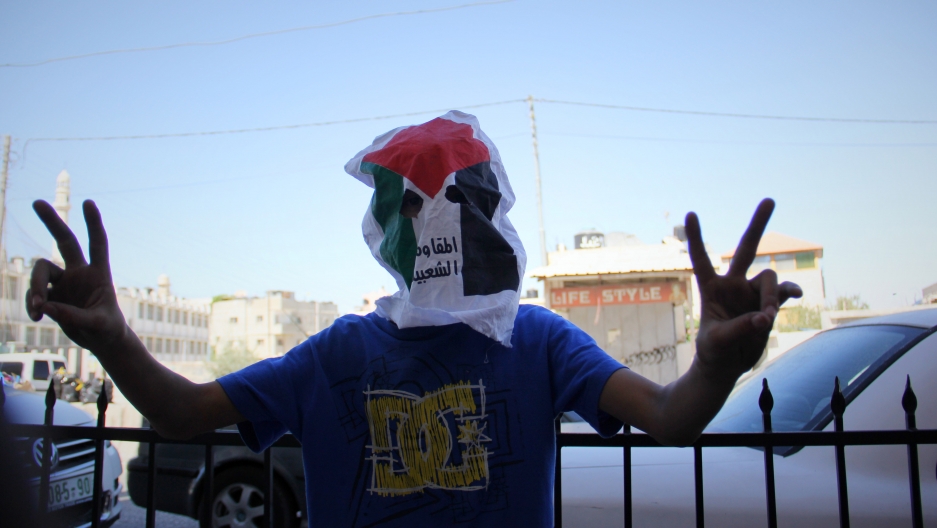 An 11-year-old boy lingers near the Qalandiya checkpoint as some expect fresh clashes with Israeli army.
Credit:

Three weeks of fighting between Israel and Hamas have resulted in more than 1200 deaths in Gaza. But until recently, the West Bank remained relatively quiet.

That changed last week when more than 10,000 Palestinians descended on the Qalandiya checkpoint, the much-loathed crossing between Jerusalem and the West Bank. The marchers protested Israel’s assault on the Gaza Strip in one of the biggest demonstrations the West Bank has seen in years.

Three people were killed by Israeli gunfire, one of them a 17-year-old named Mohammed Al-Araj. His funeral drew 1000 mourners into the narrow streets of the Qalandiya refugee camp. They carried Mohammed’s body wrapped in a Palestinian flag.

Richard Zananiri, who stood outside the tent where the Al-Araj family was accepting condolences, says Palestinians in the West Bank and Gaza have lost too much in the past three weeks to return to the oppressive status quo.

He's not the only one. Another mourner, an 18-year-old who asked to be called Hossam, says Palestinians are on the edge of another intifada, or uprising. "People are just getting sick of the occupation," he says. "they’re getting sick of the [Palestinian Authority] and how it’s trying to control the people. People just want a third intifada, they want to rise again."

Hossam thinks the only thing standing between the West Bank and an uprising is the lack of strong leadership. "The PA aren’t really interested in a third intifada," he complains. He points to the huge funeral as proof that people are ready to mobilize if called upon. “The people were just waiting for someone to organize them. As soon as they heard there was going to be a protest this large they were ready to go."

But Palestinians say there’s already an uprising under way — a nonviolent one. “This new uprising is different from the two previous ones. That’s what many people don’t recognize and that’s why they don’t understand,” says Mustafa Barghouti, a Ramallah politician who heads a party called the Palestinian National Initiative.

That's in part because many people in the West Bank, particularly in Ramallah, have to weigh their salaries and their children’s education against the costs of taking to the street. Activists have accused the PA of placating West Bank Palestinians with mortgages and car loans. “You are living your basic life; you go to work and you go out at night and it’s deceiving, it blinds you from what’s going on,” says Sama Salem, who’s sitting in a restaurant in Ramallah. She’s a 20-year-old student finishing her degree in the US.

“I think people in Ramallah kind of get what it’s like to live a normal life. Not absolutely normal, definitely not. But they know what it’s like and they don’t want to give that up.”

But that’s no longer the case for the thousands of people who protested in recent days, and discontent can be infectious — another protest broke out on Thursday in Nablus, another West Bank city:

Still, it seems the Palestinians’ own leadership might be the biggest barrier to a new uprising — a third intifada, while aimed at Israel, would also be a challenge to them. Indeed, protesters have clashed with Palestinian police several times in recent weeks. If there is a fresh intifada, the stones and chants of uprising could be directed at them.