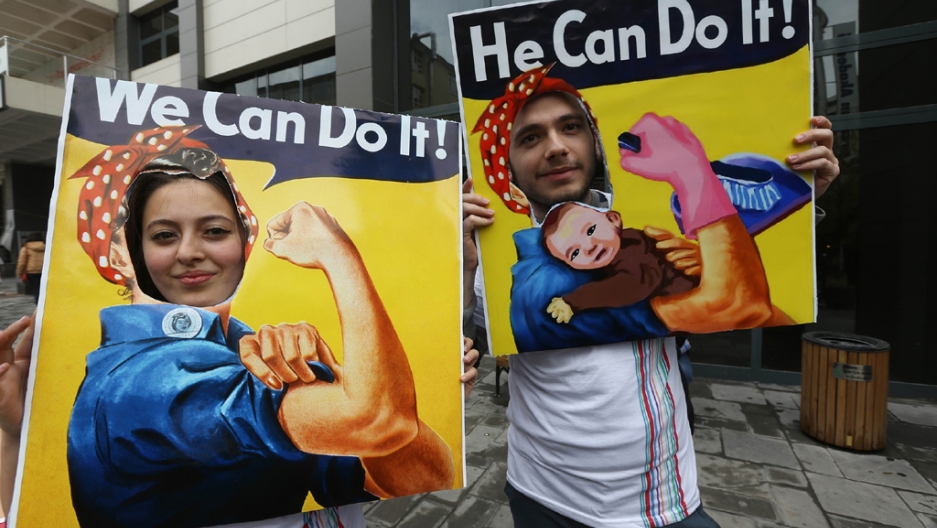 A couple pose for a picture parodying the "We can do it" American poster during a march in central Ankara, Turkey, as part of International Women's Day on March 8, 2014.
Credit: ADEM ALTAN
Share

The unclear boundaries between mosque and state in Turkey is causing confusion yet again. This time because of some old-timey comments made by the country's deputy prime minister.

Bülent Arınç said during an end of Ramadan speech that women should not laugh in public or talk about "unnecessary" things on the phone. He made these oddly specific demands as he seemed to yearn for a simpler time when Turkish women were more repressed.

"Where are our girls, who slightly blush, lower their heads and turn their eyes away when we look at their face, becoming the symbol of chastity?" he asked, complaining of what he saw as the moral decline of Turkish society.

Turkey is a secular state, and for many decades proudly so. A 1928 constitutional amendement saw to that, as did numerous reforms by the country's well-loved first president, Mustafa Kemal Atatürk. But a little more than a decade ago the people of Turkey (who are almost all Muslim) elected the Justice and Development Party, and it's leader Recep Tayyip Erdogan, to power. The AKP, as it's known, has its roots as a religious political party, though abandoned those roots (many think for political reasons) in favor of a conservative democratic agenda.

Speculation over his true intentions has followed Erdogan ever since his election. He lifted a long-standing ban on women wearing religious headscarves if they work in government, for instance, last year. This seems like a step in the direction of religious freedom, a good thing. But Turkey's former secular elites, who miss being in charge, saw it as more evidence that Erdogan wanted to turn the the country into some kind of an Islamic state.

To be fair, the concerns are real. In April, Turkish pianist Fazil Say was actually convicted of "blasphemy" and "inciting hatred" over a series of comments he made about religion on Twitter. In the end he only received a suspended 10-month jail sentence. But that was hardly enough to calm anyone's Godless nerves.

Despite this anxiety, though, Turkey remains a long way from becoming a country defined by religion. The way Turkish women reacted to Arınç's remarks is evidence of that. They took to social media en masse, posting photos of themselves laughing in public, including the hashtag #direnkahkaha, which means to resist and laugh.

The main opposition candidate, Ekmeleddin İhsanoğlu, was also quick to seize on the comments for some easy political points.

"Our country needs women’s and everyone’s laughter more than anything," he tweeted. It was retweeted more than 5,000 times in a matter of hours.