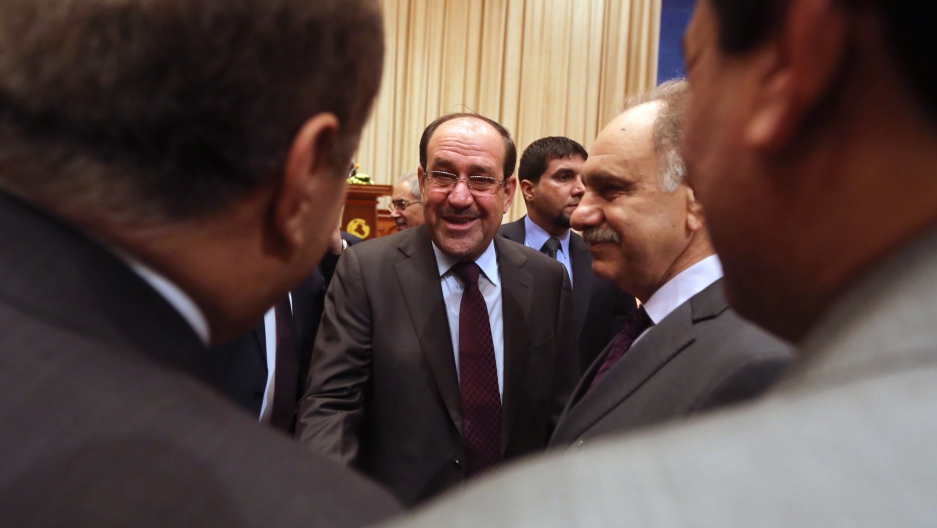 In a letter read by one of his aides on Friday, supreme Shia cleric Ayatullah Ali Al-Sistani urged Iraq’s political leaders not to “cling to their posts,” while the State Department implied in a press conference Thursday that Maliki’s days are numbered.

Iraqi citizens largely blame Maliki for the country’s sectarian split that escalated last month as radical Sunni militant groups led by the Islamic State (IS) seized a chunk of the country, declaring its own caliphate. Although Maliki is only the latest in a nearly unbroken string of Shia leaders since the US-led invasion toppled Saddam Hussein's Sunni government in 2003, he has taken a harder line against the Sunni population than his predecessors. Tensions rose following violent crackdowns on Sunni protests in 2013 and early 2014.

“What is happening in Iraq is a Sunni revolution against a dictatorship and a sectarian government,” said one Arab leader in Kirkuk who asked not to be identified due to fear of government arrest. “We [Sunnis] have suffered from the central government. We have been arrested, systematically tortured and raped in the prisons and executed under the Maliki Shia government.”

Those arrested under Maliki stand accused of involvement with terrorist organizations, although Sunni leaders say in many cases the evidence is thin or even based entirely on hearsay. A report by Human Rights Watch released earlier this year supports claims of systematic rape and torture of detainees but includes accounts of both Sunni and Shia inmates.

Following the appointment of Kurdish politician Fuad Masum as the country's next president on Thursday, lawmakers now have 15 days to select Iraq's next prime minister. Despite the pressure, Maliki seems bent on staying in power for a third term. But returning Maliki to power would not sit well with either the Sunnis or the Kurds and would further divide the nation along sectarian lines.

Fingers point to Maliki over IS rise

“I don't want to say [the Maliki government] is 100 percent ... responsible, but predominantly they bear the responsibility for the current situation,” said Iraq expert Austin Long, of the Arnold A. Saltzman Institute of War and Peace Studies at Columbia University. “They have spent a good bit of the past five years systematically alienating the Sunnis, so it's not even a little bit surprising that this uprising has taken place.”

Long said this is why throughout the country and the region people are saying Maliki has to go.

“But you have to have a successor and if you are going to stick with the Iraqi constitution it’s going to be hard to have a coalition that doesn't include Maliki’s party,” he said.

Maliki took power in 2006, at a time when a Sunni uprising against a Shia-dominated government was already brewing. Back then, it was IS predecessor Al Qaeda in Iraq (AQI) that was winning Sunni militant support. Most Arab tribal leaders were not keen on either a Shia-led government or a Sunni extremist one. They resisted the extremists, according to Long, in part because there was a crucial non-Shia party they could join with to fight AQI: the United States.

Thousands of Sunnis signed up to fight extremists of their own sect alongside US forces, easing the sectarian split.

The American military hired around 100,000 Sunni militiamen, forming a force they named the Sons of Iraq, which provided jobs and a safety net against the Shia-led government. But when the US left, responsibility for the Sons of Iraq was passed to Baghdad. Complaints of mistreatment, delayed payments, and failure to incorporate them into Iraq’s security forces led to the decline of this Sunni protection force and the rise of government-aligned Shia militias.

Members of the Al-Abbas brigades, who volunteered to protect the Shiite Muslim holy sites in Karbala against Sunni militants fighting the Baghdad government, parade in the streets of the Shrine city on June 26, 2014. (MOHAMMED SAWAF/AFP/Getty Images)

Long said many of the group's members were even arrested and executed under Iraq’s anti-terrorism law, which allows for arrest without charge and harsh penalties against suspected terrorists.

He cited the case of Sons of Iraq leader Adil Mashhadani, who was arrested in 2009 and finally executed by the Maliki government in January this year alongside many other former members and suspected Sunni militiamen.

Even Iraq’s Sunni vice president Tariq al-Hashimi could not escape Maliki’s terrorism law. In September 2012, he was sentenced to death in absentia after fleeing to Turkey, accused of running his own militia that operated as a hit squad.

“Were these trumped up charges? Probably not,” Long said during a Skype interview last week. “But if he is a terrorist then so is every other party leader in Iraq with their own militia groups — it’s not that it wasn't true, it’s just that it was selectively applied to Sunnis. For everyone else doing the same thing, it was ‘Well, we’ll give you a pass.’”

Despite resentment that had already reached dangerous levels, Maliki came down even harder on the Sunnis and their leaders.

“That's hardly a sign of someone who wants to build any bridges,” Long said.

With no other options, Sunnis turn to IS

In Kirkuk, Arab leader Abu Abdullah said hundreds are still being arrested and detained during regular raids on Arab neighborhoods throughout Iraq. He himself was arrested and tortured several years ago. Eventually he was released, but hundreds of those arrested have been executed without trial or have simply disappeared.

Abu Abdullah took part in years of negotiations with the Maliki government in an attempt to broker a power sharing deal and equal rights for Sunnis. But the response was even harsher crackdowns and more violence.

By last year, in a move reminiscent of the beginning of the Syrian uprising, the Iraqi government began shooting unarmed Sunni protesters. Dozens were killed when government forces attacked a protest camp in Hawija. Abu Abdullah had been one of the protest organizers.

“These men belong to tribes. When one of them is killed, the whole tribe will take revenge,” he said.

Lacking the strength to fight back alone, Sunni militants and tribal leaders cut a deal with the rising extremist force now known as the Islamic State, who with local support soon swept through Iraq taking control of numerous Sunni towns and cities.

Despite holding secular views, one Mosul resident described the situation after the IS takeover as "better for civilians."

“The Iraqi army used to hassle us a lot. Everyone was afraid of them,” he said. “I’m not keen on an extremist government but at least they treat us better than Maliki.”

Columbia University's Long said while the IS takeover may have happened surprisingly fast, the reasons behind it were predictable.

“This has been bubbling up in a big way for a long time,” he said.

The question American analysts and Sunni critics alike are pondering is whether the IS sweep through Iraq is partly the United States’ fault. Many Sunni leaders have pointed to the US and the international community for their failure to act against Maliki.

The Arab leader who asked to remain unnamed said the situation only reached today’s crisis levels because the world turned a blind eye to the Sunni suffering and sectarian discrimination for too many years.

“I think the US probably deserve some blame," said Long, "but secondary to the Maliki government because it’s not clear what our alternative would be."

The US tried to broker power sharing deals, he said, which Maliki rejected. And pulling US support from the central government at this point would likely lead to an even greater disintegration of the Iraqi security forces and an expansion of the Islamic State — although, contrary to popular opinion, Maliki is not entirely dependent on US support: His government has also been backed by Iran and recently received fighter jets from Russia.

So what does all this mean for the future of Iraq?

“I think we will increasingly have something that looks like a real civil war, but not one that any side can win easily,” Long said, adding that the result will most likely be a stalemate that looks a lot like Syria.

As the Kurds prepare for independence, and the Islamists have already declared their own caliphate, Iraq is already in effect divided into three separate entities.

But back in Kirkuk, Abu Abdullah has not yet given up hope on a unified Iraq if Maliki were to go.

“I would agree on the division of Iraq, only as an alternative to Maliki,” he said.

If the international community could broker a deal, and negotiations led to a fair deal for Sunnis, Abu Abdullah said he is confident the Arab leaders would agree.

“No one wants to fight,” he said. “Negotiation is better than a long drawn-out bloody civil war.”