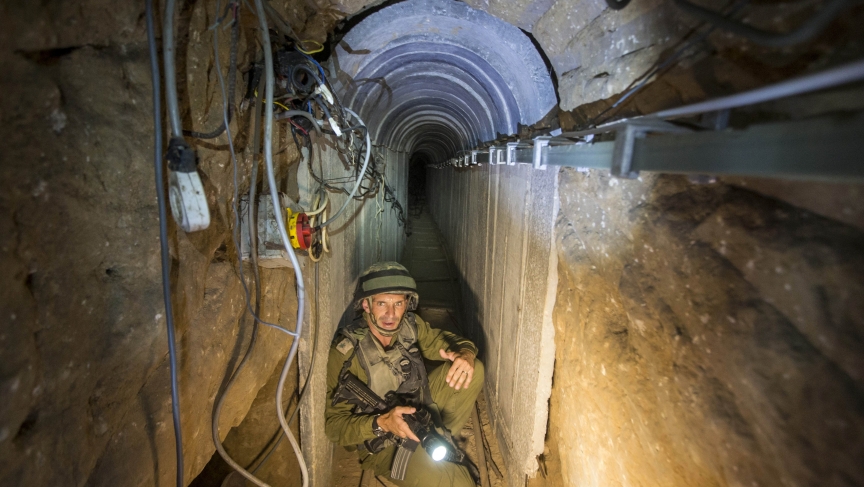 An Israeli army officer during an army-organized tour in a tunnel said to be used by Palestinian militants for cross-border attacks.
Credit:

In Gaza, a weekend pause in hostilities was replaced by one of the war's worst nights of bombardment. Israeli strikes damaged Gaza's only power plant, and Israeli media reported that power for the 1.8 million people in the Gaza Strip is all but dead.

This latest round of attacks looks like the start of a new phase in the war. In a televised address late Monday night, Israeli Prime Minister Benjamin Netanyahu told his citizens to prepare for a long fight in Gaza. “Israeli citizens cannot live with the threat from rockets and from death tunnels — death from above and from below,” he said.

On Tuesday, one senior PLO official called for a 24-hour humanitarian cease-fire — a proposal that has since been rejected by Hamas. It underlined the deep divisions within the Palestinian leadership, with various factions pulling in different directions.

What's not in dispute is the one direction Hamas seems determined to pursue — its sophisticated network of tunnels. They're used by Hamas to transport weapons and launch attacks on Israel, and they're the key targets of Israel's operation.

Jodi Rudoren, the Jerusalem bureau chief for the New York Times, recently got a look inside one tunnel. "This tunnel is quite a bit underground — about 46 feet down — and you have to duck to get into it, but a medium-sized person can stand," she described. "It's very, I think, professionally built, with concrete walls and a curved concrete top."

Rudoren says that Israelis fear these tunnels because they allow militants to come into Israel to carry out attacks on soldiers or civilians. Monday night saw one such assault on an Israeli military post near Nahal Oz, a kibbutz.

"They killed five Israeli soldiers, and were trying to actually take a body of one of the soldiers back through the tunnel," Rudoren says. "Soldiers at the watchtower shot at them and killed or injured one of them, and they did all get back into the tunnel but without an Israeli body."

But as frightening as such raids may be, it's the threat of abduction that truly scares Israelis. "The real fear is they'll come to some kibbutz and spray the dining hall with machine gun fire," Rudoren says. "In one case, they found some tranquilizers and plastic handcuffs, so the fear is that they tried to kidnap people."

The current Israeli ground operation is aimed at stopping the tunnel threat, but Israeli officers say they've been surprised at how complex the tunnel network is and how far into the Gaza Strip it extends. The Israeli military is enforcing a "buffer zone" that makes up more than 40 percent of the territory. It's a measure of how potent a weapon the tunnels are for Hamas in this conflict, and the fear they stir in the hearts of Israelis.

"For years, the primary tool from Gaza was rocket fire, and the primary impact in Israel was not really death, but this constant running into bomb shelters and this destruction of life," Rudoren says. "They don't seem to have an answer to the tunnel threat, and it's totally freaking people out."