Groups of Muslim Americans gathered on hilltops around the country Sunday night, looking up to the sky for the new crescent moon that signifies the end of the fasting month of Ramadan.

Islamic tradition says Muslims should stop fasting once the new moon is seen. But a recent religious ruling will allow some Muslims to use astronomical science, rather than their eyes, to calculate when the new moon emerges.

The conflict about which method to use plays out not only in places like Indonesia, Pakistan and Morocco, but right here in the US, too. About 20 Muslim families gather on a hilltop outside the Lawrence Hall of Science in Berkeley, California, about a month ago.

It's just after sunset. A water fountain bubbles, women and men chat, kids run around with snacks in their hands. And everyone at some point or another, looks up to the sky.

They are moonsighting, scanning the sky for the new crescent moon that signifies the beginning of the month of Ramadan. Every year, they come here to fulfill a centuries-old tradition of the Prophet Muhammad, who said "Fast when you see it, and break your fast when you see it," meaning, when the new moon appears. If they see it, they'll start their fast. If they don't, they'll wait a day. 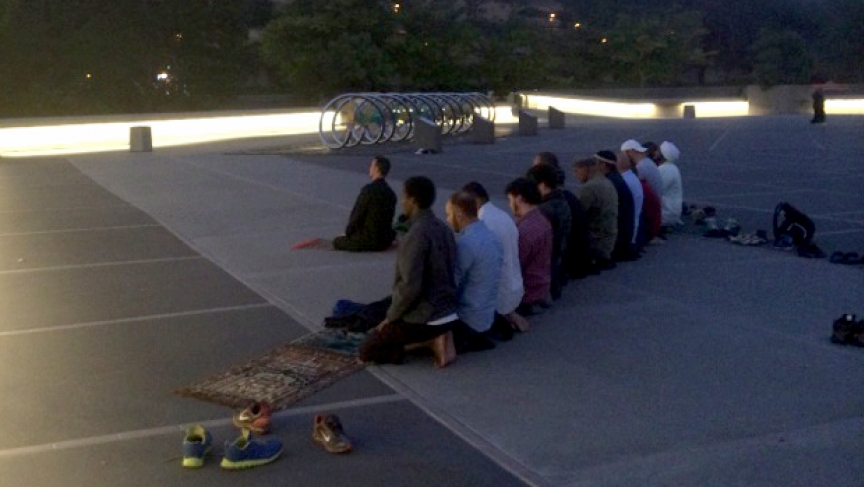 California Muslims pray on a hilltop in Berkeley.
Credit:

Zarreen Zowjah-Malik is standing nearby in a wool overcoat. She says her family loves to moonsight. Has her family ever spotted the new crescent moon?

"I have!" she says. "I've sighted the moon in this very spot, 4 or 5 years ago! And we actually saw the crescent, we were all very excited to see it!"

Not everyone, though, is uncertain about when Ramadan starts. About an hour south of the Berkeley Hills, lies the Muslim Community Association, or MCA, — a mosque in Santa Clara. In the midst of Silicon Valley, minutes away from tech giants like Yahoo, Cisco and Apple. MCA congregants knew exactly when they would start their fast, months ago. How? They use astronomical calculation, science, to mark the start of the month. MCA officer Tarek Mourad explains that the Quran urges Muslims to think, learn and discover.

"You have to embrace science when science shows you something," Mourad says. "And understand what it is. So for me, calculation is important and so is being in the Bay Area where we push the envelope with science."

In Stanford University's Physics and Cosmology Department, research associate Walt Ogburn explains the long equation used to calculate when the new moon will emerge. "So", he says, "you can plug in any month you want and find out exactly when, at what time, on which day, the new moon will be. This is something you can use to predict the time of the new moon for centuries and centuries out and it'd be very precise."

Muslims using scientific calculations to mark Ramadan are following a recent fatwa, or edict, issued by the Fiqh Council of North America, or FCNA, a body that makes Islamic legal decisions for an American context. FCNA Director Muzzamil Siddiqi says caculation removes the uncertainty that often comes with moonsighting. He said the objective is not to see the moon, the objective is to make sure that the new month has come.

"That objective is better fulfilled through scientific knowledge. Sometimes you may miss the moon or see something different and you think it's the moon. So astronomical knowledge is a more certain knowledge," Siddiqi says.

And, Siddiqi notes, there are many advantages to calculating. Most importantly, a set calendar makes it easier to do things like reserve party halls for the post Ramadan festival. And not just that. People can get time off from their offices, and students can take time off from their school on a single, known date.

Now before you go thinking this sounds like another clash between science and religion, UC-Berkeley Islamic history professor Asad Ahmed says not so fast.

"The differences should not be made into 'those who are modern on the one hand, and who believe in science and believe in astronomy, and those who do not,'" Ahmed says, adding that science is no stranger to Muslims. Islamic history, he says, has a rich scientific tradition. Astronomers like Galileo and Copernicus built upon the works of 8th century Muslim astronomers. In fact, Ahmed says, religious scholars had to also be astronomers.

"Historically," he says, "Muslim scholars would generally be trained in a curriculum including many disciplines including astronomy and logic, theology, and mathematics."

The practical result of practicing two methods — moonsighting and calculation — is that people often get differing outcomes. While calculators predict the new moon on one day, the moonsighters won't start fasting unless they see the moon. That has meant people start their fasts on different days. And therefore they celebrate the end of their fasts on different days as well. The unity of fasting together as one Muslim community is thrown off. That's something that everyone agrees needs fixing

Atop their Berkeley hill, the moonsighters are still looking upwards after the evening prayer. After about an hour, they realize it's very foggy and they can't see the moon if there is one. A man named Bilal Alhabashi, who's surrounded by kids, asks them. They admit they haven't seen the moon.

So, no fasting tomorrow for this group. But, the calculations say there was a new moon that night. So scores of other Muslims did indeed fast the next morning. Bilal Alhabashi has a name for people who follow each method.

And, he says, both are just fine in Islam's eyes.

Sundia Alrashid is the Imam of Oakland's Lighthouse Mosque, and so far he's not considering the "digital" method. But he's open to it.

"Myself," he says,  "I like the local sighting. But I like the unity of the Muslims even more. So if everybody agreed to go with calculation, I'd be fine with that. But until they do, I'm just gonna keep sighting the moon! "

While they may not agree, the moonsighters and calculators have the same goal — to complete a month of fasting, reflection and, in the words of one young lady standing under the foggy night sky, a month of detoxing the spirit.

This story was part of a reporting project called The Spiritual Edge.