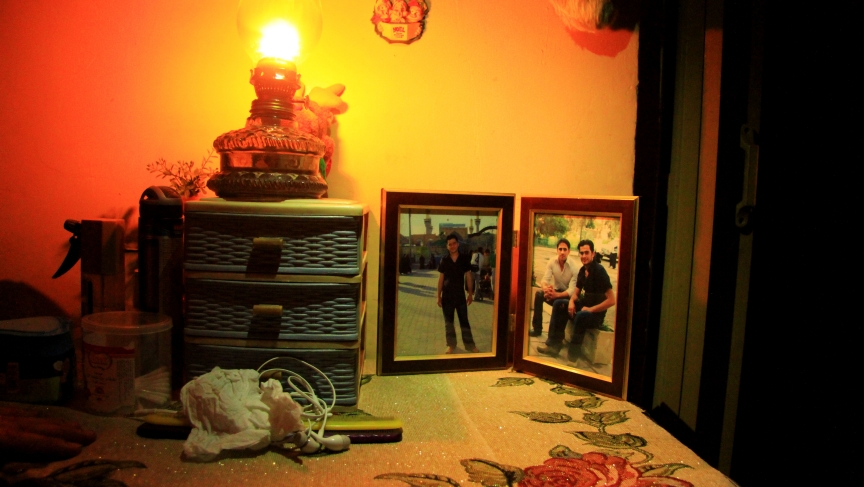 Photos of Salam and his older brother sit on a small table in his family's home, lit only by cell phones and a lantern. Salam says his brother was arbitrarily arrested by Iraqi security forces. The family was initially able to visit him, but it's been more than a year since they've heard any news.
Credit:

In Adhamiya, a largely Sunni enclave of Baghdad, the power is out this evening, but the streets are still packed with residents flooding into cafes, restaurants and shops.

Beneath the lively atmosphere, though, there's an undeniable current of uncertainty and fear.

Down an unpaved alley, one family agrees to speak to me — but only from the privacy of their living room. Everyone is nervous, double checking that their full names won't be used, joking that maybe they should just use a Shia name instead.

It's not so good to have a name associated with Sunnis right now in Baghdad.

Iraq’s capital is now a mostly Shia city, but it is still home to hundreds of thousands of Sunnis, a community feeling increasingly trapped by the rising sectarian tensions. After Sunni militants swept across northern Iraq in June, capturing Iraq’s second largest city of Mosul, Shia militias stepped up to defend Baghdad from a similar fate.

By candle and cell phone light, Salam, who's 23, explains that it's been a rough few years for his family. And now, the current crisis has left them — and much of the Sunni community in Baghdad — feeling cornered by Shia militias, Sunni extremists and an oppressive government.

Salam's father was murdered in 2007 during Iraq’s civil war — the family believes at the hands of a Shia militia. Then, after US troops pulled out of Iraq in 2011, Salam says his older brother — who was armed by the US to fight against al Qaeda-linked extremists — was arrested and tortured. Initially, the family was able to meet with him; they even hired a lawyer. But after a few visits, they were turned away. It's been close to a year since they've had any news of him.

“These days,” Salam says, “the situation feels like it did when my father was killed.”

He says some of the same fighters with the militia that murdered his father are back out patrolling the streets again. He feels stuck, reliving past tragedies over and over again

“We don't have a future; these memories are not memories. This is a continuous thing we are living with now. We are living those memories," he says.

When I ask if he blames the Shia for his family's tragedy and the current uncertainty, Salam pauses and says, after his father was killed, he did blame the Shia. But this time around, he blames the government for the insecurity, specifically Prime Minister Nouri al-Maliki.

Other young Sunni men in Salam's neighborhood complain of arbitrary arrests. They tell stories of being harassed at checkpoints and threatened by the increasingly powerful militias; as a result, many are fleeing. Salam says he's thought about going away; two of his friends already have.

His mother tells me that she worries every time Salam goes out.

After her oldest son was arrested, she says, she wanted to sell the house and move to Iraq's semi-autonomous Kurdistan region. She ended up staying here in Baghdad, hoping her son would be released. Now she wishes she had just gone.

“Nothing is good here,” she says. “Even the good things, if they happen, they don't last. They go away and fade. That’s our life"

With the electricity still out, from the roof of Salam's home, the view is pitch black. All that's lit is Abu Hanifa Mosque.

Salam turns to me and says, "Do you think this is life, [what] you see right now with the bombing, kidnapping and no electricity?  We're just like the walking dead."

Susannah George's reporting from Baghdad is part of our partnership with Global Post.